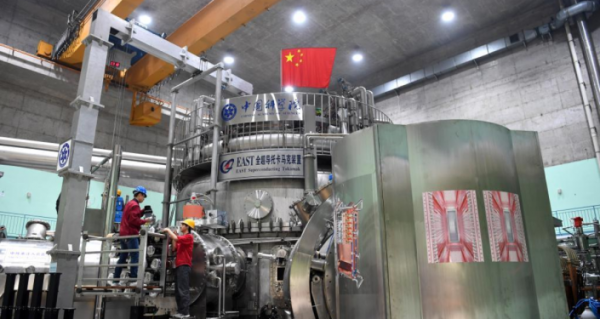 The Belt and Road infrastructure megaproject doesn’t just include rails and highways, it’s aimed at helping nations achieve energy independence, too. China is exporting nuclear power plants of a newer, safer design to partner nations like Pakistan, as well as building them at home to help transition away from fossil fuel use.

China’s futuristic nuclear fusion reactor just set a new world record for the longest duration of time in sustaining the sun-like temperature needed for fusion to occur. While China is still a long way from a fusion power plant, the achievement is an important step towards clean, sustainable electricity generation.

However, he cautioned that the technology is still decades away from actually being used outside of a lab. “It’s more like a future technology that’s critical for China’s green development push,” he said.

The Experimental Advanced Superconducting Tokamak (EAST) at the Hefei Institutes of Physical Science of the Chinese Academy of Sciences in China’s Anhui Province, seen on May 28, 2021.

The reactor has been nicknamed an “artificial sun,” but according to NASA’s Jet Propulsion Laboratory, the center of the sun is just 15 million degrees Celsius, meaning the device is several times hotter than the sun.