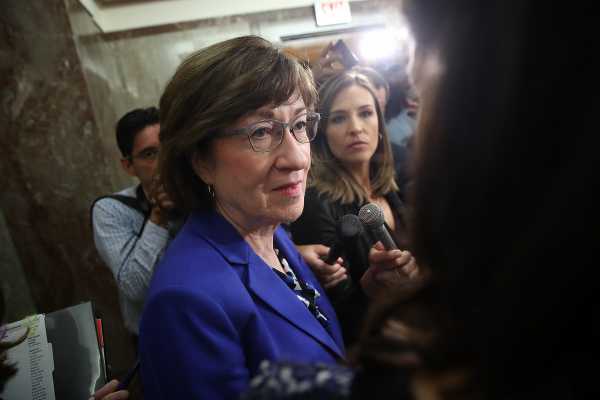 Cunningham, a business owner living in the coastal town of East Boothbay, voted for the Maine Republican senator when she was last up for reelection in 2014. But since President Donald Trump was elected in 2016, Collins’s moderate Republican image has taken a beating among a subset of Maine voters. Cunningham is ready to abandon Collins. Since 2016, she joined a progressive grassroots group called Mainers for Accountable Leadership, where she’s now a co-director.

“I was hopeful she would stand up to [Trump] and be a check on him,” Cunningham told me recently. “The big pivot points for me were first the Gorsuch vote and then the tax vote, and then Kavanaugh,” she said, referring to Collins’s votes for two Trump Supreme Court judges and a tax cut bill. “I don’t think she’s anywhere near as moderate as she’d like us to believe.”

Collins has been a political institution in Maine for the past 22 years, when she first was elected to the Senate. She’s easily cruised to reelection in the past, but Democrats think voters like Cunningham are the reason this year could be different. Maine is one of Democrats’ top targets in their bid to take back the US Senate, and the race against Collins will be very expensive and hard-fought.

Collins hasn’t yet confirmed she will run again. But she’s already facing attacks from both sides: Republicans are still incensed with her pivotal no vote helping defeat the 2017 GOP bill to repeal the Affordable Care Act and Democrats are furious with her yes votes on the GOP tax bill and confirmation of Supreme Court Justice Brett Kavanaugh.

“I think there’s a bunch of different people whose names are floating around out there, I don’t think any of them are causing Susan Collins to stay up at night,” said Mark Brewer, a political science professor at the University of Maine.

“It’s no surprise that national Democrats and their partisan allies will target this seat,” said Collins’s campaign spokesperson Kevin Kelley in a statement to Vox. “But Sen. Collins has always faced well-funded Democratic challengers, and should she ultimately decide to run again, she will work hard, as she always has, to ensure she has the funding to run a strong and vigorous campaign.”

Maine is known for its independent political streak; it has more undeclared voters than either Republicans or Democrats (Democrats also outnumber Republicans). The state swings between Democratic and Republican leaders, and its senators are known for their less partisan tone — hence King’s political affiliation as an independent, and Collins’s emphasis on bipartisanship.

“As someone who was born and raised in Maine, I can tell you that the vast majority of the people of our state don’t look for party labels, they vote for the person they like and trust, and the person that they think will work the hardest for them in Washington,” Collins’s campaign spokesperson Kelley said. “They have repeatedly placed their trust in Senator Collins, and we are confident that they will continue to do so because no works harder or gets more done for them than she does.”

But Maine’s Republican Party has also recently tilted toward the mold of Trump-like politics, even before Trump was elected. If Collins represents one part of the Maine Republican party, it’s other embodiment is former Gov. Paul LePage, the controversial, bombastic politician who once said, “I was Donald Trump before Donald Trump became popular.”

“It’s become all right to become the nasty party of Paul LePage because you win,” said Sandy Maisel, a longtime Maine politics expert and professor of American government at Colby College.

And Trump’s presidency has tested Collins’s moderate image unlike anything else. Collins wrote an op-ed in 2016 explaining why she wouldn’t vote for Trump, saying his “constant stream of cruel comments and his inability to admit error or apologize” made him “unworthy of being our president.”

But since Trump took office, Collins’s voting record tracks closely with the president’s agenda. She voted with her party 87 percent of the time in 2017, according to a CNN analysis, a higher percentage than any other year of her career before then. FiveThirtyEight’s updated analysis of how senators vote with Trump’s agenda has Collins hovering around 70 percent.

Collins’s legacy in the age of Trump was cemented with her vote to confirm Brett Kavanaugh to the Supreme Court, after Kavanaugh was accused of sexual assault by his high school classmate Christine Blasey Ford (an allegation Kavanaugh denied).

Collins’s speech announcing how she’d vote blamed “special interest groups whip[ping] their followers into a frenzy by spreading misrepresentations and outright falsehoods about Judge Kavanaugh’s judicial record.” Fellow Republican Sen. Lisa Murkowski of Alaska became the only GOP woman in the Senate to vote “present,” rather than voting for Kavanaugh.

Maisel, for one, is a bit skeptical about Collins’s moderate image, given how closely she’s tracked with Republicans on high-profile votes.

“Despite the fact she would like to be, she is not John McCain,” Maisel said, referring to the “maverick” reputation the senator sometimes had before his death last year. “She doesn’t have the moral rectitude. She’s not going to stand up on these issues and say this is who I am. She frets so much about how she’s going to vote and is the last person to commit.”

Democrats are energized to take Collins down

Of the three states Democrats are eyeing to take back a Senate majority — Colorado, Arizona, and Maine — Collins could be the toughest to beat. Cook Political Report currently rates Maine Senate “Lean Republican” rather than a toss-up.

“In Maine we don’t generally defeat incumbent senators,” said Maine political science expert Ken Palmer, who pointed out the last time an incumbent senator was defeated was in the late ’70s. “They like to keep their senators in, they like the seniority.”

And Democrats seem particularly energized to try to defeat her. The Democratic Senatorial Campaign Committee considers Collins a top target. Maine Democratic Party spokesperson Alex Stack estimated there were nearly 100 volunteer canvassers joining on a recent weekend, and he attributes that energy to a desire among left-leaning Mainers to see Collins gone.

“There was a lot of grassroots energy that came out of [the Kavanaugh vote],” Stack said. “People keep wanting to step up for us. That energy has not dissipated, it’s only grown.”

Both Gideon and Sweet, the two Democrats with the likeliest shot of winning their party’s Senate nomination, are going after Collins for her votes in support of Trump’s agenda, as well as her taking cash from corporate PACs. Both are forswearing campaign money from that source. Whoever wins will have a $4 million campaign nest egg in the general election coming from a fund from liberal groups who put a target on Collins after her vote on Kavanaugh.

Cunningham, the co-director of Mainers for Accountable Leadership, says she’s not sure if enough people in the state want to see Collins gone. But she hopes it’s enough. Cunningham made up her mind when she and three other women — all sexual assault survivors — traveled to Washington last year to plead with Collins to vote against Kavanaugh.

“We were just trying to talk to her woman to woman,” Cunningham said. “She comes across so nice, and she was very nice. But there was a point at which she kind of flipped a switch. Susan Collins the woman went away and Susan Collins the politician took over.”

Cunningham left Washington and headed back home to Maine convinced Collins would vote to confirm Kavanaugh, which the senator did two days later.

“She can’t pretend to be a moderate after those votes,” Cunningham said.