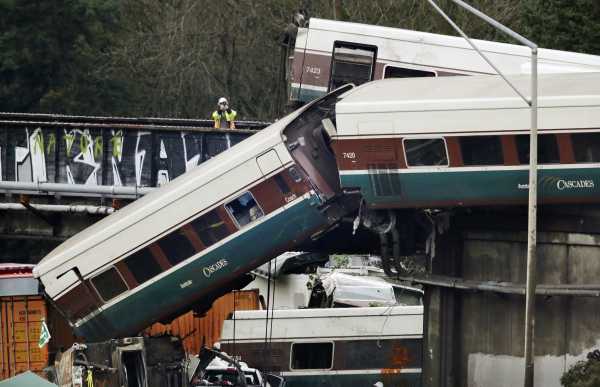 The devastating Amtrak Cascades train 501 derailment Monday happened while the train was racing at about 80 miles per hour — far above the speed limit of 30 miles per hour, the National Transportation Safety Board said on Tuesday. The train cars lurched off the tracks, spilling onto and dangling above the interstate below. At least three people were killed and dozens more injured.

The NTSB is now investigating why the train was moving more than double the posted speed limit in this area. The derailed train had just embarked on its first trip on a brand new $181 million route, designed to improve reliability and speed up the trip between Seattle and Portland.

One possibility officials are looking into is whether the engineer might have been distracted — a human error that might have been stopped by positive train control technology, which can prevent derailments due to speed. The technology was not yet activated along this stretch of the new route in Washington where the Amtrak train jumped the tracks.

Positive train control basically communicates route data in real time to a train’s computer, constantly checking that the train is following the designated direction and speed at different points along the route — braking when it should, for instance. Or if a train is traveling above the speed limit, the computer can essentially take over and slow or stop the train. It can’t prevent all accidents, or certain equipment malfunctions, but it is a safeguard against derailments due to speeding or collisions caused by human error.

“If the driver doesn’t take action, then [the system] will take action,” said Hualiang Teng of the Department of Civil and Environmental Engineering and Construction at University of Nevada Las Vegas and a commissioner of the Nevada High-Speed Rail Authority, adding that the onboard computer basically “becomes the brain of the train.”

According to the Seattle Times, upgrades to this route were supposed to include positive train control technology, though it was not activated when train 501 took off from Seattle Monday morning. The full installation on this line had been planned for the spring of next year. “The shameful part, the disappointing part, is that positive train control should have been implemented nationwide long ago, and it hasn’t been,” NTSB representative Bella Dinh-Zarr said Tuesday, after the Washington derailment. “That’s one reason people have been losing their lives.”

Positive train control is not new. Nor is the hand-wringing over why it’s yet to be widely installed; it came up after the 2015 Northeast regional Amtrak derailment outside Philadelphia that killed eight, and 2016’s New Jersey commuter rail crash in Hoboken that killed one and injured scores.

Congress mandated all passenger rails and certain freight trains install the technology by 2015. Lawmakers later extended the deadline, after pushback from railroads that threatened some railway shutdowns because they wouldn’t meet the due date, citing the complex technology and expense of installation and testing. The new deadline is the end of 2018, though it left open the possibility for extensions through 2020.

After Monday’s derailment, President Donald Trump tweeted that it showed “more than ever why our soon to be submitted infrastructure plan must be approved quickly.” He mentioned bridges and roads crumbling, though the Amtrak train in Washington had just been enhanced with millions in federal grants.

It is, however, a clear failure to fully invest in safety and technology that improves the infrastructure we do have. And that is also a matter of money. “The technology’s there,” Teng said, adding that it’s been installed in other countries in Asia and Europe for years. “It is all about the cost.”

Trump is expected to release his infrastructure plan in 2018. A leaked “wish list” from this January did include numerous railway improvement projects, but it’s unclear if this will make it into the forthcoming plan. Bloomberg reported earlier this month that Trump’s latest infrastructure proposal will only call for about $200 billion in federal funds, with the goal of spurring billions in local and state investment.

It’s still a question of whether positive train control would have prevented the Amtrak crash in Washington. If human error is to blame, positive train control might have kicked in when the train was reaching such high speeds. This technology can’t prevent every accident along the country’s railways, but the Washington derailment stands as a reminder of the high costs of America’s failure to make these investments.