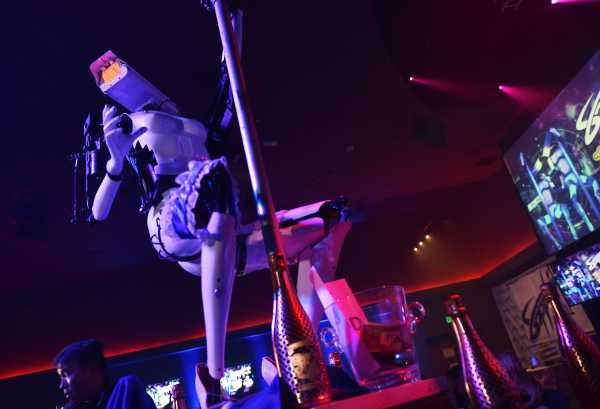 In Robot Sex, Neil McArthur, an associate professor of philosophy at the University of Manitoba, brings together essays that explore the ethical, social, and philosophical implications of the robotics of intimacy. “As these technologies become more immersive and more sophisticated, there may be some people in the future who simply identify as people who prefer to have sex via technology,” he says. (The co-author of the volume is John Danaher, a lecturer in the law school at the National University of Ireland Galway.)

I discussed the benefits and downsides of robot sex, and “digisexuality” more generally, with McArthur. This conversation has been lightly edited and condensed.

When people have this idea of a sex robot, they think it’s going to look like a human being, it’s gonna walk around and say seductive things and so on. I think that’s actually the slowest-developing part of this whole nexus of sexual technology. It will come — we are going to have realistic sex robots. But there are a few technical hurdles to creating humanoid robots that are proving fairly stubborn. Making them walk is one of them. And if you use Siri or any of those others, you know that AI is proving sort of stubbornly resistant to becoming realistic.

But I think that when you look more broadly at what’s happening with sexual technology, virtual reality in general has just taken off. And it’s being used in conjunction with something called teledildonics, which is kind of an odd term. But all it means is actual devices that you hook up to yourself in various ways that sync with things that you see onscreen. It’s truly amazing what’s going on.

I’m curious about some of the ethical and philosophical implications related to both the technology that you’re describing and the more humanoid stuff that could happen in the distant future.

When you look at the ethical or philosophical considerations, — I think there’s two strands. One is the concerns people have, and two, which I think maybe doesn’t get as much attention, in the media at least, is the potential advantages.

The concerns have to do with the psychological impact. As you saw with those Apple shareholders [who asked Apple to help protect children from digital addiction], we’re seeing a lot of concern about the impact that technology is having on people’s lives right now. Many people feel that anytime you’re dealing with sexual technology, those sorts of negative impacts really become intensified — specifically, social isolation, people cutting themselves off from the world.

And then there’s a very strong strand of objection to this kind of technology based on how women are portrayed and how it will affect society’s views on women.

Say a little more about social isolation and dehumanization.

There’s also the concern about how they’ll behave. So far, the robots that have been designed always say yes when you want them to have sex. Sex robots will always want to have sex with you. They may model a form of consent that we don’t necessarily want to endorse, which is that women are always sexually available.

I don’t think you can dismiss those concerns. But I think one of the solutions is just to make better technology and make sure that there are non-objectifying, non-sexist options. There are people like Kate Devlin in the UK who are trying to research better sex robots, better sex technology that won’t just be the traditionally exaggerated women.

People should continue to press for society to become more sexually egalitarian. But I don’t think you can think that technology is going to, on its own, undermine that. One of the interesting things about pornography is that — even though a lot of pornography is not very positive in terms of its portrayal of women — as pornography has become so much more available in the past 20 years, we haven’t seen a spike in sexist attitudes. We’ve seen the opposite: The data shows that people’s views of women have gotten more progressive and better over the past 20 years as pornography has spread. So I don’t think there’s grounds for panic on that.

The other strand is the concern about the psychological impacts, and the idea that all these people will retreat into their basements with this sex technology and never come out.

Again, I don’t think it’s possible to dismiss that, especially when you consider that some of these technologies are going to be taken up pretty early on by teenagers. You’ve got teenagers who are already shy and withdrawn, who are going to find this technology very easy to latch onto as an excuse not to meet actual people.

But I think that, again, with anything, it’s a matter of balancing. If we’re aware of risks and we can make sure there’s education and so on around it, on balance, we’re gonna get a lot of benefit from this technology. I think we should be prepared to accept that it’s coming and just try to mitigate the risks how we can.

What benefits are you referring to?

Inequality has been so much a part of the conversation — in terms of economic inequality, health care inequality, and educational inequality. This is probably overdue. But people don’t talk about inequalities in our access to intimacy and our access to sex. I don’t think we pay attention to the way in which, through no fault of their own, lots of people just have a lot of trouble finding partners.

They may be disabled. They may just not be conventionally attractive. They may be in situations, like prison or mining camps or something like that, where they can’t find people of the opposite sex. Or they may be gay or lesbian and they may be living in a small town in Alabama. There’s lots of ways in which people just don’t have access to any kind of sexual intimacy. I think that technology may not be as ideal as actually having a human partner, but I think, for many people, it’s better than nothing.

I wrote a paper recently about something called digisexuality. As these technologies become more immersive and more sophisticated, there may be some people in the future who simply identify as people who prefer to have sex via technology. I co-wrote the article with a therapist who does a lot of work with clients’ use of technology, and our view was that there’s nothing wrong with digisexuality. If people just happen to prefer technological sex to human partnered sex, we shouldn’t freak out about that.

That’s so fascinating. I’m curious about real-world examples of that right now.

You’re not, at this point, seeing a lot of real-world examples of this, because we’re just now seeing the emergence of these kinds of technologies. But, there was the guy in China who married his robot. There was a fictional movie where Ryan Gosling was in love with a doll. We’re now reaching the point where you can imagine that people will start to prefer living in, maybe, these multi-user environments where you hook up your virtual reality headset and you go into one of those online worlds. You have sex with people, and you can have your devices hooked up to them.

When we wrote this article, we did have some people contact us through Facebook or informally telling us, “Yes, I’m a digisexual. This is how I identify.” But our project for the next few months is to track down some of those people and figure out how this is playing out in the real world.

Is having sex in VR or having sex with a robot all that different from pornography or other sex toys?

Is there any specific company that comes to mind as being the Apple of sex robots?

Well, right now, the closest thing would be the RealDoll company in California, which is run by a guy named Matt McMullen. He’s the Steve Jobs of sex robots in that he’s, at least, the best at attracting media attention. They’re the ones that you always hear about, specifically when it comes to robots.

But honestly, I don’t know that they’re doing the most interesting work. I think the most forward-seeing person on the technology side would be, again, Kate Devlin of the University of London. Every year, she has a sex tech hackathon, where she tries to bring people together to develop new innovative ideas to do with sex robots and sexual technology.

What’s a more real concern in your mind, one that nobody’s really talking about?

The media does focus a lot on security and if robots will kill us. I think that’s a real concern. We already have seen sex toys getting hacked. And for me, this is not glamorous, but I think there’s a lot of intellectual property concerns that haven’t been worked out. I mean, robots that look like your ex, or robots that look like Brad Pitt or Angelina Jolie, would be, in different ways, worrisome if the people involved aren’t consenting to that. I don’t know that our laws have really got their heads around how to deal with this.