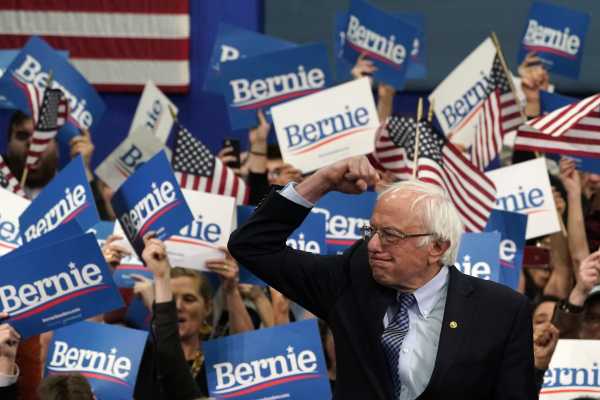 A new Las Vegas Review-Journal/AARP Nevada poll shows Sen. Bernie Sanders leading the Democratic presidential field in Nevada, where the third contest of the Democratic primaries will be held in one week.

Republican polling firm WPA Intelligence conducted the telephone survey on behalf of the Review-Journal and AARP Nevada in the days after the New Hampshire primary, February 11 to 13; the poll has a margin of error of 4.8 percentage points.

It is important to note that this poll, while professionally conducted, should be taken with some caution. The results are certainly in line with recent trends — Sanders has surged in a number of national and state polls, and ahead of the Nevada caucuses, many have noted that he’s made strong investments in the state and has unrivaled support from Latino voters. But, that margin of error means Biden could actually top the field in the state; and broadly, Nevada is a state that is notoriously difficult to poll accurately.

It is so difficult that according to RealClearPolitics’s polling aggregator, there have been only three major Nevada surveys in 2020 (in contrast to more than 20 conducted in advance of the New Hampshire primary).

In both previous 2020 Nevada polls, the state seemed to be torn between Biden and Sanders. A Suffolk University/USA Today poll from early January showed Biden in the lead with 19 percent support, Sanders with 18 percent, and their nearest competitor — Warren — 8 percentage points behind. A Fox News poll taken at the beginning of January showed Biden coming in with 23 percent support and Sanders at 17 percent, with Warren and Steyer 5 percentage points behind the senator from Vermont.

Why polling in Nevada is extremely difficult, briefly explained

There are a few reasons why Nevada is so difficult to poll accurately.

After the 2004 election, the state switched from holding primaries to caucuses, and was pushed much earlier on the primary calendar as part of an effort to make the primary system more inclusive of the Democratic Party’s demographic make-up. (Nevada’s population is almost a third Latino.)

While this change did make the Democratic primary more diverse, it also introduced new uncertainties into the polling and candidate selection process. This has made pollsters’ work more difficult in that respondents aren’t always familiar with the ins-and-outs of caucusing, and because decades of caucusing data isn’t available to help build models or make assumptions.

And as FiveThirtyEight’s Clare Malone has reported, part of the difficulty of Nevada polling is that’s it’s simply harder to talk to people. The state has a disproportionate amount of people who work odd hours, and a relatively transient population.

That all being said, the poll’s findings don’t seem surprising given how Sanders is trending across the nation, and given the demographics of the Democratic electorate in Nevada.

A recent national poll conducted by Morning Consult, for example, shows Sanders is dominant among Latino voters, with more than double the support of any other candidate. In 2019, Sanders received more financial support from Latino donors than any other 2020 hopeful, snagging up over a third of the roughly $24 million that Latinos donated to Democratic presidential candidates.

Following his New Hampshire win, Sanders is on the rise in other polls as well

Sanders has leaped from third place to second place in the past month in South Carolina, according to an East Carolina University poll released Friday. The university’s pollsters found Biden has 28 percent support in the state, Sanders has 20 percent, and Steyer has 14 percent. South Carolina has been considered Biden’s “firewall” in the primaries — his path to the presidency relies on heavy support from black voters — but his support there has been declining.

Sanders also has been looking strong in key states that will vote on Super Tuesday, a day when more than 33 percent of the race’s national delegates will be up for grabs.

In particular, as Vox’s Dylan Scott reported on Friday, Sanders is surging in Texas and in California, the most delegate-rich state to vote on March 3:

The Sanders surge in the polls is a pretty clear phenomenon, and a victory in Nevada seems quite possible. The key question there — and in other states where he’s leading — is whether he can pull off the sorts of decisive victories needed to ensure he’s positioned to win a majority of pledged delegates before the Democratic National Convention in July. And as of right now, that’s far from a sure thing.

Why coronavirus scammers can send fake emails from real domains