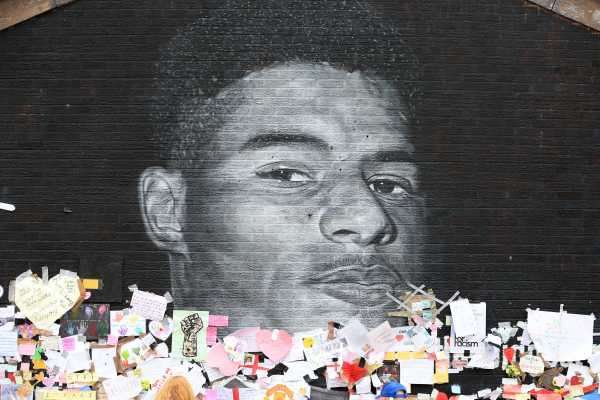 It wasn’t exactly surprising that hordes of social media trolls viciously attacked three Black players on England’s soccer team with racist comments and emojis after a historic loss on Sunday, July 11. What was unexpected was how quickly even more social media users came to the defense of the players.

“I’ve been working in anti-racism for over 20 years, and I am surprised at how huge and widespread and how swift the anti-racist response was,” said Sabby Dhalu, who works at the UK nonprofit Stand Up to Racism.

Tens of thousands of commenters directly combated the racist attacks by posting positive messages on the personal Facebook and Instagram pages of the three players: Marcus Rashford, Jadon Sancho, and Bukayo Saka. By Monday morning in California, supportive comments started to outnumber the negative ones on players’ recent Instagram photos.

Fans trying to counteract the hate speech on Facebook and Instagram urged fellow supporters to report offensive comments to company moderators. At the same time, they expressed frustration with these companies for their sluggish moderation of these attacks.

While Twitter and Facebook eventually took down most of the blatantly racist comments, the onus fell to everyday users on the platforms to react quickly and shut down the toxic discourse. The incident showed how regular users on social media are increasingly stepping up when social media companies don’t do enough to stop the spread of hate speech on their platforms.

Facebook, for example, does not proactively moderate a common type of racist attack, one that was being used aggressively on Rashford, Sancho, and Saka’s accounts: comments full of monkey and banana peel emojis. Instead, Facebook relies on users to report these kinds of comments, a company spokesperson told Recode. Once users report them, Facebook’s content moderators may take the comments down if the emojis are being used inappropriately. The company also encourages users experiencing harassment to defend themselves by turning on a “hidden words” feature that can block designated words or emojis in comments on their posts.

Many soccer fans reported these types of racist posts to the social media company where the posts appeared, and also tried to overpower the posts by sharing positive messages of their own.

One viral tweet said, “They’re colour blind when you’re winning, but can only see colour when you lose. Proud of you, Bukayo Saka, Marcus Rashford and Jadon Sancho. Still we rise.”

The 15 most shared tweets containing the three players’ names as of Monday afternoon were similarly all supportive, according to data provided to Recode by social media research organization First Draft News. The hashtag “#saynotoracism” started trending on Twitter in the UK soon after the game. A supportive message about one of the players, Rashford, saying, “Our hero, always. There is so much love for you, Marcus Rashford,” was one of the most shared links posted by a verified account on Facebook on Tuesday within the previous 24 hours, according to Facebook-owned analytics tool Crowdtangle.

But it takes only a relatively small group of users to successfully harass someone on social media.

Twitter said it took down 1,000 posts in the 24 hours since the game. Facebook, which owns Instagram, declined to say how many posts the company removed, but said in a statement that it “quickly removed” an unspecified number of comments and accounts.

Still, Facebook’s and Twitter’s responses also fell short in the eyes of many British politicians and public figures, including leaders of England’s Conservative Party such as Prime Minister Boris Johnson, who sharply criticized these companies for the vitriol on their platforms. In the past, Johnson and other members of the Conservative Party have been criticized for not supporting England’s football players when they decided to take a knee to protest racial discrimination. But this time, politicians, media outlets, and public figures across the political spectrum in England were unified in their condemnation.

“I share the anger at appalling racist abuse of our heroic players. Social media companies need to up their game in addressing it, and, if they fail to, our new Online Safety Bill will hold them to account with fines of up to 10 percent of global revenue,” Oliver Dowden, England’s Secretary of State for Digital, Culture, Media and Sport, tweeted on Monday.

Social media companies have long struggled to police the flow of hate speech and misinformation on their platforms.

In this case, Twitter said it used a “combination of machine learning-based automation and human review” to identify racist comments toward players, and that it “proactively” flagged a majority of this content with its technology.

Facebook said the company “quickly removed comments and accounts directing abuse at England’s footballers” and that it will “continue to take action against those that break our rules.”

“No one should have to experience racist abuse anywhere, and we don’t want it on Instagram and Facebook,” read part of a statement sent by Facebook. “No one thing will fix this challenge overnight, but we’re committed to keeping our community safe from abuse.”

“I think it’s too much to be asking someone to make a complaint, every single time,” said Dhalu. “Companies need to be setting up a filter to prevent this. It’s pretty shocking that they’re not.”

And while it would have helped deter abuse against these specific players if the platforms had chosen to proactively monitor and delete racist comments on their accounts, the issue of harassment and hate speech on social media is widespread. These companies need to enforce the rules better across the board, said Sunder Katwala, director of the UK-based multiculturalism think tank British Future.

“I think the more fundamental point is: What is allowed and what isn’t allowed?” asked Katwala. “The [social media companies] are saying, ‘racist behavior has no place on our platform,’ but you’ve got all kinds of racist comments.”

The English soccer team situation shows that social media companies still have a long way to go before they’re actually backing up their stated commitment to barring racism on their platforms. In the meantime, it seems that do-gooder users are counterbalancing the hate. Depending on how you look at it, that’s either a hopeful sign that shows everyday people are stepping up to combat racism — or it’s a disappointing indication that powerful social media companies still aren’t doing what’s necessary to stop hate speech before it spreads on their platforms.

Feds are seizing cryptocurrency from criminals. Now they have to figure out what to do with it.