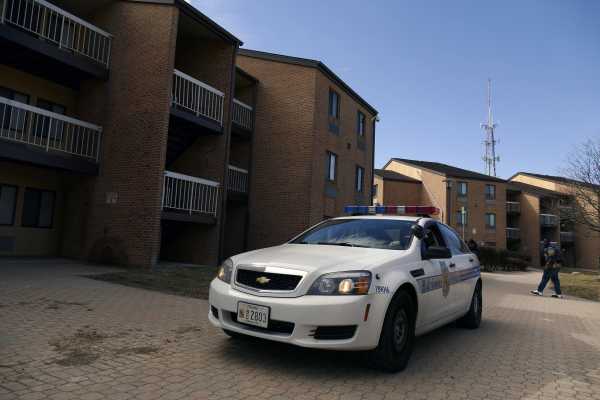 An elite Baltimore police task force spent years plundering the city and its residents for hundreds of thousands of dollars in cash, drugs, and jewelry.

That’s the astonishing revelation from the case against the Baltimore Police Department’s now-defunct Gun Trace Task Force. Eight people in the nine-member task force have been charged with crimes that amount to massive abuses of power and repeated violations of locals’ constitutional rights. Six have pleaded guilty, and two were convicted of several federal charges on Monday.

The task force, as its name suggests, was originally meant to get guns and violent criminals off the streets. In an investigation spanning over the past few years, however, federal officials uncovered a team fueled by corruption: The police officers in the unit set people up for baseless searches. They robbed people. They carried toy guns to plant as fake evidence in case they killed an unarmed person. They clocked overtime when they weren’t working at all.

As then–US Attorney for Maryland (and now–Deputy Attorney General) Rod Rosenstein put it at the time of the indictment, “This is not about aggressive policing, it is about a criminal conspiracy. These are really simply robberies by people wearing police uniforms.”

Many of the allegations have been confirmed by some of the task force’s own members, several of whom pleaded guilty to charges and took the stand against fellow ex-officers. On Monday, the two officers who did not plead guilty, former detectives Daniel Hersl and Marcus Taylor, were convicted by a federal jury of racketeering conspiracy, racketeering, and Hobbs Act robbery charges, CNN reported.

The allegations hit a local police department that was already severely troubled. In a 2016 investigation, the US Department of Justice found that the Baltimore Police Department was abusive and corrupt on multiple levels — riddled with racially disparate impact “at every stage of [its] enforcement actions” and a constant source of constitutional rights violations. The Justice Department explained that these practices have “erode[d] the community trust that is critical to effective policing.”

Meanwhile, Baltimore’s murder rate has soared over the past several years. The city reported 343 killings in 2017, bringing it to a record-high rate of 56 homicides per 100,000 people. The incredible increase led Mayor Catherine Pugh to fire Baltimore Police Commissioner Kevin Davis, replacing him with Darryl De Sousa, a veteran at the department.

These two events — the widening distrust in the Police Department and the rising murder rate — are linked. As people are less able to turn to the Police Department for help, they’re more likely to lose trust in the law and take matters into their own hands, even if it means resorting to violence to settle disputes. With the wild allegations now being made against — and confirmed by — officers of an elite polite task force, things are potentially bound to get even worse.

A police force that was completely out of control

The Drug Enforcement Administration (DEA) began its investigation in 2015 with suspicions of misconduct by one of the officers in the unit, Momodu Gondo. The DEA believed that Gondo had helped some drug dealers avoid charges. As they investigated — and caught Gondo in an intercepted phone call allegedly admitting, “I sell drugs” — the scope of the corruption and abuse they uncovered widened over time, eventually engulfing most of the Gun Trace Task Force.

Here are examples, reported by the Associated Press, Baltimore Sun, and Washington Post, of what’s been found in the aftermath of the DEA’s revelation, much of which has come from some of the officers’ own testimony:

This is just a small sample of some of the allegations, which could span an entire book. These were people appointed by the city to a supposedly elite task force, charged with getting firearms off the streets — and instead they collectively used their jobs to loot much of what they found.

This has led to a huge fallout in the criminal justice system: The nearly 3,000 cases that the eight indicted officers were involved in have now been called into question, potentially allowing people previously convicted of crimes to be let free because the evidence is no longer reliable.

Eight of nine ex-officers in the unit were charged. Six pleaded guilty: Thomas Allers, Momodu Gondo, Evodio Hendrix, Wayne Jenkins, Jemell Rayam, and Maurice Ward. Two pleaded not guilty but were convicted by a federal jury: Daniel Hersl and Marcus Taylor. Only one — John Clewell — has not been charged with a crime, because he reportedly wasn’t very involved with the team.

The accused each face potentially decades in prison.

That this task force was allowed to run amok implicates not just its members, but the police department that paid — and supposedly oversaw — them. And this wouldn’t be the first time that the Baltimore Police Department was exposed as allowing and even enabling abusive, corrupt practices.

In a 2016 Justice Department investigation following the protests and riots over the police killing of Freddie Gray, federal investigators found example after example of abuse, corruption, and racism within the Baltimore Police Department.

The Justice Department found that police in the city were disproportionately likely to stop black people even when they were totally innocent of any crimes — one black man in his mid-50s, for instance, was stopped 30 times in less than four years, never to be cited or charged.

Officers also escalated situations into violence for no good reason. In a 2013 case, cops stopped a black man in a hoodie who was not suspected of any crime, seized a kitchen knife from him, and then, after the man asked for his property back, handcuffed and beat him, landing him in the hospital. The man was never charged with a crime.

And officers repeatedly detained and arrested people simply because they engaged in speech perceived to be critical or disrespectful — a violation of First Amendment rights.

The examples go on and on, and you can read more about them in Vox’s explainer of the Justice Department report.

The city and Police Department have vowed reforms since the Justice Department’s investigation, even after the new attorney general, Jeff Sessions, attempted to pull back federal oversight of the reforms.

But problems have continued. Beyond the allegations against the Gun Trace Task Force, there have now been three incidents in which Baltimore police officers were caught on body camera footage tampering with an alleged crime scene. These incidents alone have forced the local prosecutor to drop dozens of cases the officers were involved in.

All of this paints a picture of a police department in total disarray, mired in corruption and abuses of power.

Of course, Baltimore residents — particularly those of color — have been trying to warn city, state, and federal officials about these types of abuses for decades. As Ray Kelly, head of the West Baltimore advocacy group No Boundaries Coalition, told the Washington Post, “The only thing that is surprising to me with these trials are the actual guilty pleas and that officers are going to prison. For years we have talked about and tried to identify the levels of corruption within the [Baltimore Police Department], and now our concerns are, sadly, being validated.”

More broadly, the findings reflect what communities across the country — again, particularly those of color — have been warning about for decades. While the Baltimore Police Department appears to be particularly bad, previous federal investigations into other police departments, from New Orleans to Chicago, regularly found evidence of systemic racial discrimination and violations of civilians’ constitutional rights. These findings help explain why movements like Black Lives Matter have taken off over the past several years.

It’s a travesty that the officials sworn to protect Baltimore civilians spent their time terrorizing locals instead. But this abuse of power can also help explain why Baltimore’s murder rate is now soaring.

There’s also a concept known in criminal justice circles known as “legal cynicism.” The idea is that the government has a much harder time enforcing the law when large segments of the population don’t trust that government, the police, or the laws.

This is a major explanation for why predominantly minority communities tend to have more crime than other communities: After centuries of neglect and abuse, black and brown Americans are simply much less likely to turn to police for help — and that may lead a small but significant segment of these communities to resort to its own means, including violence, to solve interpersonal conflicts.

There’s research to back this up. A 2016 study, from sociologists Matthew Desmond of Harvard, Andrew Papachristos of Yale, and David Kirk of Oxford, looked at 911 calls in Milwaukee after incidents of police brutality hit the news.

They found that after the 2004 police beating of Frank Jude, 17 percent (22,200) fewer 911 calls were made in the following year compared with the number of calls that would have been made had the Jude beating never happened. More than half of the effect came from fewer calls in black neighborhoods. And the effect persisted for more than a year, even after the officers involved in the beating were punished. Researchers found similar impacts on local 911 calls after other high-profile incidents of police violence.

But crime still happened in these neighborhoods. As 911 calls dropped, researchers also found a rise in homicides. They noted that “the spring and summer that followed Jude’s story were the deadliest in the seven years observed in our study.”

That suggests that people were simply dealing with crime themselves. And although the researchers couldn’t definitively prove it, that might mean civilians took to their own — sometimes violent — means to protect themselves when they couldn’t trust police to stop crime and violence.

“An important implication of this finding is that publicized cases of police violence not only threaten the legitimacy and reputation of law enforcement,” the researchers wrote, but “they also — by driving down 911 calls — thwart the suppression of law breaking, obstruct the application of justice, and ultimately make cities as a whole, and the black community in particular, less safe.”

That’s why, especially in the context of racial disparities in police use of force, experts say it’s important that police own up to their mistakes and take transparent steps to fix them.

“This is what folks who rail against the focus on police violence — and pull up against that, community violence — get wrong,” David Kennedy, a criminologist at John Jay College, told me in 2016. “What those folks simply don’t understand is that when communities don’t trust the police and are afraid of the police, then they will not and cannot work with police and within the law around issues in their own community. And then those issues within the community become issues the community needs to deal with on their own — and that leads to violence.”

The allegations against the Gun Trace Task Force speak to this. If the people sworn to protect you will actually rob you for their own profits, why should you trust them? And if you can’t trust them, what are you going to do the next time you have a serious problem — with a family member, friend, neighbor, whomever — that would normally require the criminal justice system? The result is perhaps more violence that a better police force could have prevented.