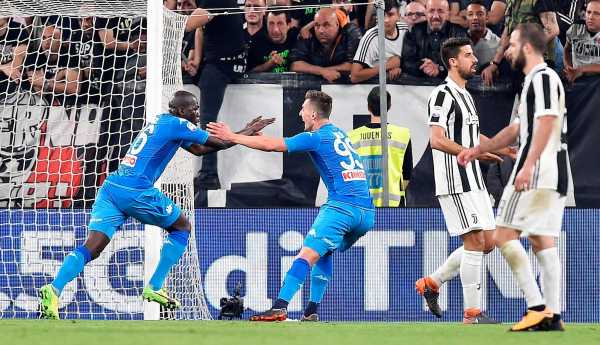 Napoli sent their fans into delirium with a last-minute winner at Juventus which blew the title race wide open in Serie A.

With the game goalless going into the 90th minute, Kalidou Koulibaly put the visitors in front with an unstoppable header to take Napoli just one point behind their hosts with four games of the season to play.

Some teams might try to play it cool after such a result, but Napoli opted instead for brilliant celebrations, both on the pitch and in the stands.

But it wasn’t just in the stadium that supporters were jubilant. Look at what it means to these fans in London.

Napoli still have much to do, but the players allowed themselves a moment to enjoy their achievement before the title race gets going again.

Juventus still have away games against Roma and Inter Milan to come, while Napoli’s fixture list looks more favourable. It could well be a title race worth tuning in to…

If this is how Napoli react to closing the gap, imagine the scenes if they reach the summit of Serie A.