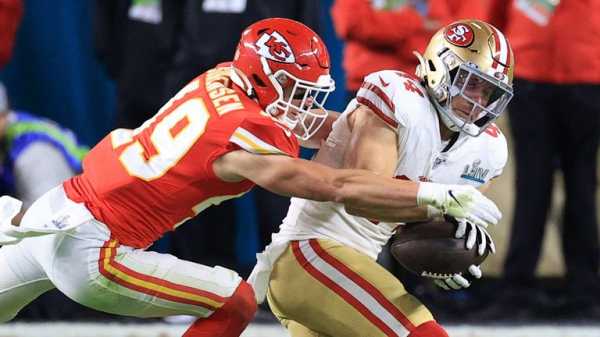 8:40 Re-live the Chiefs’ victory over the 49ers in Super Bowl LIV as Mahomes led a fourth-quarter comeback

As the son of Pat Mahomes Sr, a Major League Baseball pitcher, and as a kid born in Texas, there was never any doubt Mahomes would play sports – and it became clear he had an arm with some talent.

In football, he was a quarterback. Baseball? A pitcher. He played basketball too, but football was his future, and even after he was selected by the Detroit Tigers in the 2014 MLB draft, he opted for the football field – and in-state Texas Tech University.

His college career was statistically impressive, but that’s the case for every quarterback who makes the NFL grade. 11,252 yards, 93 touchdowns and 29 picks in 32 games is fantastic.

His team lost, but it wasn’t for lack of effort from the strong-armed, gunslinging QB. Defense was non-existent as future No 1 overall pick Baker Mayfield and the Sooners topped the Texas Tech Red Raiders 66-59 (!) but Mahomes turned heads.

He broke the NCAA record for single-game passing yards with 734 (as well as five touchdowns) on a whopping 88 attempts. Add in his 85 rushing yards – the most in any game in his college career – and Mahomes’ total of 819 total yards was another record number.

His contributions on the ground over the course of his college career were mightily impressive (22 TDs) but as we approached the 2017 NFL Draft, there was one thing scouts, coaches and general managers came to see – the arm.

At his Pro Day, he wowed everyone with an 80-yard throw. More recently, he’s said he can get to about 85. 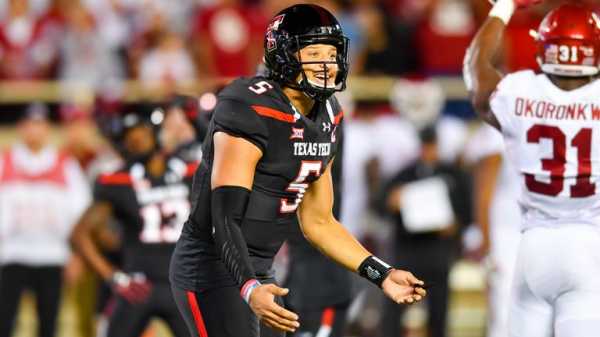 The arm, the college production and his character were enough for Andy Reid and the Chiefs to give up their 27th overall selection, their third-rounder, and a first in 2018 to go up and get him.

It has turned out to be the perfect fit.

We’ve seen many quarterbacks come straight out of college, start in the pros and go on to have great success. We’ve also seen many crash and burn, lose confidence and never recover.

Mahomes was lucky enough to sit for one year behind a veteran quarterback in Alex Smith, and there’s no doubt it paid dividends. Speaking in Miami during media week, Reid explained how helpful it was for the then-rookie QB to sit behind such a successful predecessor.

“Smith was phenomenal,” he said. “He wasn’t asked to do this but he let Patrick into his world. Patrick handled it the right way – he was humble and didn’t try to overstep his bounds with Alex, but he competed.

“With that, Alex let him tag along with him on the field and off the field and showed him how to be a pro. So how you study, your diet, your workout plan, how you work your family into the National Football League and be a great player in the league.

“I joke about it but it’s true: Patrick couldn’t pay Alex enough for what he gave him with that experience.” 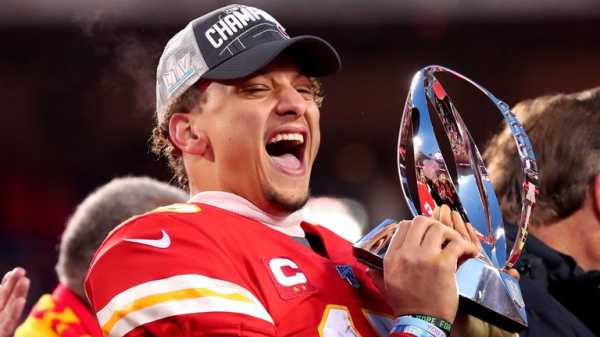 Sure enough, Mahomes had to be patient behind Smith. And Chiefs fans have had to be patient with Reid, who has brought a new culture to Kansas City but has yet to deliver the big one. It is a very similar situation to his previous role.

When his opportunity did arrive, the impact was immediate. A four-touchdown outing in his debut as a starter. A six-touchdown, 42-point explosion as an encore.

It never slowed down.

In Week Three of the 2018 season, Mahomes was facing a third and goal at the four-yard line against the 49ers. In backpedalling to avoid the pass rush, he ended up back at the 24-yard line before firing to the back of the end zone to Chris Conley for a remarkable touchdown.

At Denver in Week Four, not only did he lead a 10-point fourth-quarter comeback, but one of the plays along the way was a five-yard third-down conversion with his left hand. 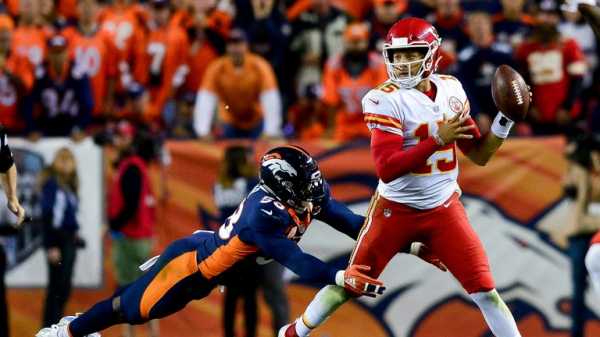 Week 14 in 2018 was a masterpiece. Against the Ravens, we saw a sideline sling, the unforgettable ‘no-look pass’, and a fourth-and-nine conversion in which he launched the ball way back across the field for Tyreek Hill, but it was simply too hard to stop.

With the unforgettable start to his career, Mahomes has already earned the respect of his peers.

“He’s a great quarterback, man,” cornerback Xavier Rhodes, now of the Indianapolis Colts, told Sky Sports at January’s Pro Bowl in Orlando. “He can run, throw, he can throw on the run. He can make good reads. A quarterback like that, it’s really hard to scheme for.

His elusiveness in the pocket, cannon arm, and ridiculous creativity did not succumb to a sophomore slump.

In the first three games of 2019, he tossed 10 touchdowns and no picks, and that including four touchdowns in one quarter against the Oakland Raiders.

“[As a pass-rusher], you’ve really just got to try and keep him in the pocket, that’s first,” said Tampa Bay Buccaneers linebacker Shaq Barrett. “But he’s still going to be able to get out some way, somehow and make something happen.” 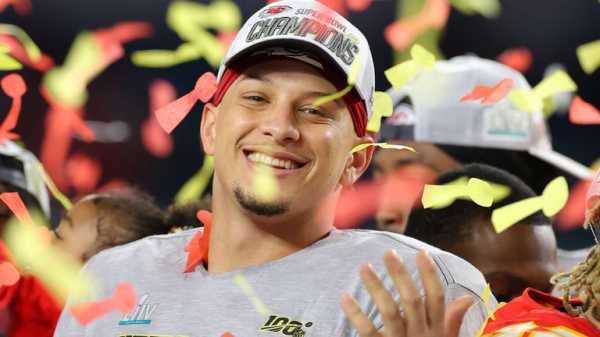 0:58 After leading to the Chiefs to their first Super Bowl win in 50 years, Mahomes hopes they can build a legacy like the New England Patriots

Even a dislocated kneecap couldn’t hold him back for long, as he missed just two and a half games before returning, and casually throwing for a season-high 446 yards (and three TDs) in that first game back. Mahomes even managed a career-high 59 rushing yards the week after.

The Chiefs came up with six straight wins before we got to see ‘Playoff Mahomes: Part Two’. In the two games prior to Super Bowl LIV, he managed 615 yards, eight touchdowns, no picks and a 131.5 passer rating. A 24-point comeback followed by a 10-point one. 86 points as a team.

In the big game itself, despite starting unusually slowly and recording his second-lowest passer rating all season, the results were the same. Kansas City’s offense – and Mahomes – couldn’t be stopped, even by the best defense in the NFL. He kept up his streak of scoring at least 31 points in every postseason appearance and secured his first (and likely not last) Vince Lombardi Trophy.

Is there any way to stop him?

“Man, at the end of the day, when you play against him your secondary has to step up,” added Pittsburgh Steelers cornerback Joe Haden. “His arm is so talented that you can’t zone it up or he’s going to tear you apart.”

So far, tearing defenses apart is all he has done. Mahomes is the highest-rated passer in NFL history (108.9 so far). He has also the highest career playoff passer rating (106.6) and TD-INT ratio by any player in the Super Bowl era.

Mahomes has enjoyed a special start to his NFL career, and if it continues at this pace, there is no doubt he will go down as one of the all-time greats.