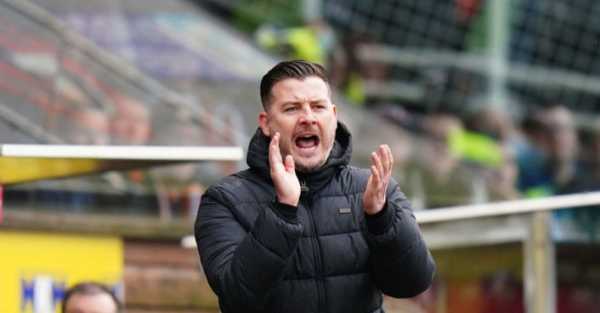 Tam Courts expressed his pride after Dundee United stood firm to earn a point from a 1-1 draw with a Rangers side who won at Borussia Dortmund just three days earlier.

The Ibrox side were brought back down to earth at Tannadice following their Europa League exploits in Germany as they squandered two crucial points in the cinch Premiership title race.

Courts was thrilled with the way his side seized the advantage in the first half and then dug deep after the break to stop the champions going on to win the game.

“This is a difficult place to come because our fans are excellent, we have a lot of good players and we know how to execute a game plan. Once we got in front I think the only thing that was missing for us was actually getting the second one which would have made it really difficult for Rangers.

“But with the quality they’ve got and even the changes they made from the bench they are always going to push you to the bitter end and when they did score, as much as I was disappointed for the players, it probably didn’t come against the run of play.”

“It is a big moment for him,” said the Terrors manager. “In terms of his performance and the team’s performance today, they were probably very much aligned – there was a lot of composure on the pitch and a really big mentality.

“It was great to see him being aggressive in both boxes because he is a big guy and brings so much to our team.”

Rangers manager Giovanni Van Bronckhorst lamented his team’s finishing after they had only one goal to show for their second-half dominance.

“The first emotion is disappointment that we didn’t win,” he told Sky Sports.

“I think in the first half we were good; not dominating but good.

“Second half was only one way and once we scored the first goal you see the momentum was for us. We created enough chances to win this game and that is the only thing that we didn’t do well today.

“Twenty-nine chances we created, which is enough to win. We didn’t (take them) and that is why we lost points.”

Rangers had two big penalty claims waved away. The first was at 0-0 when the ball struck Graham’s arm in the box and the second was after the break when the same player appeared to foul Fashion Sakala as he tried to knock the ball into the net.

Van Bronckhorst refused to make a big deal of it but felt his team could have been awarded two spot-kicks if VAR was in use.

“VAR will make it easier and these decisions can be turning points,” he said. “There is no VAR so every decision that the referee will make cannot be overturned. We have to respect the decision that he makes.”