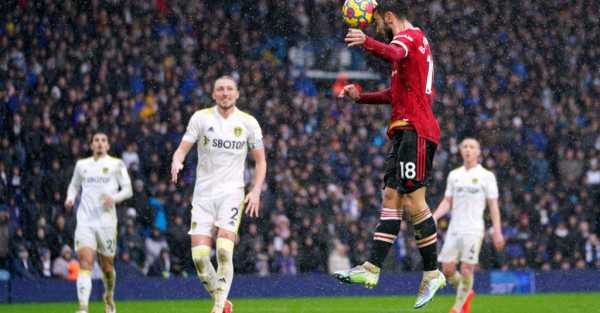 The visitors led 2-0 at half-time through Harry Maguire and Bruno Fernandes headers, before Leeds hit back with two goals inside a minute from Rodrigo and Brazilian substitute Raphinha.

Both sides went in search of a winner in horrendous conditions due to incessant rain and it was the visitors who prevailed, with Fred adding his side’s third and Elanga wrapping it up in the closing stages.

Leeds fans have grown well accustomed to breathless encounters under Marcelo Bielsa and this War of the Roses battle was right up there.

Bielsa made a big call in dropping Raphinha to the bench and recalling Adam Forshaw, while Rangnick handed Jesse Lingard his first Premier League start of the season. Paul Pogba and Aaron Wan-Bissaka also returned.

Leeds made a lightning-fast start and almost took an early lead when Jack Harrison fired over from Mateusz Klich’s deft diagonal ball.

Pogba’s low effort was comfortably gathered by Leeds goalkeeper Illan Meslier, while a better chance fell at the other end to Forshaw, whose curling effort forced a better save from David De Gea.

The visitors should have taken a 26th-minute lead, but were denied by Meslier.

Pogba tricked his way past Forshaw and his low cross invited a simple finish from Cristiano Ronaldo, but Meslier got across quickly to block with his legs.

Ronaldo appeared for United at Elland Road in October 2003 – 18 years and 125 days ago – and that is the longest gap for a player between games against an opponent in Premier League history.

Leeds, who had carried plenty of threat going forward, were forced to replace Robin Koch through concussion before United broke the deadlock with a rare set-piece goal.

Koch, who had collided with Scott McTominay earlier in the game, returned to the action with his head bandaged, but was later withdrawn in the 31st minute.

United were beginning to pull Leeds out of position before Maguire put them in front three minutes later, holding off Diego Llorente to head home Luke Shaw’s corner. It was United’s first goal from a corner since April last year.

The visitors doubled their lead in first-half stoppage time. Victor Lindelof combined with Jadon Sancho and the latter’s cross found Fernandes, who headed home with no Leeds defenders in sight.

Bielsa sent on Raphinha and teenage striker Joe Gelhardt for Llorente and Harrison at the start of the second half in worsening conditions and Leeds launched a stunning fightback.

Rodrigo’s cross from the left after a swift counter-attack swirled over De Gea’s head and nestled inside the far post and if that reignited the contest, Raphinha’s equaliser less than a minute later caused Elland Road to explode.

Dan James, in his first appearance against his former club, skipped by Lingard and Wan-Bissaka on the left edge of the box and his low cross was turned home by the Brazilian at the far post.

Rangnick made a double substitution in the 67th minute, sending on Elanga and Fred for Lingard and Pogba, and within three minutes the home fans, still celebrating, were stunned into silence.

Jadon Sancho’s neat lay-off teed up Fred and he smashed an angled shot beyond Meslier to regain his side the lead.

Elanga was struck on the head as he celebrated with his team-mates by an object thrown from the crowd, but he was to have the last laugh.

Although Leeds mounted another charge to rescue the game – Klich’s 20-yard shot was turned over by De Gea – Elanga ran on to Fernandes’ pass inside the area to fire home his side’s fourth goal.