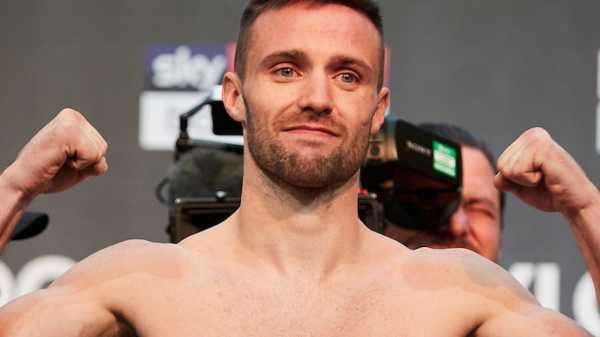 Josh Taylor knows that he can break an opponent before they even throw punches.

This is boxing’s master of the dark arts. Nobody is more astute in the days before battle, nobody more comfortable amid the chaos. Nobody thrives more when a rivalry heats up, when it gets personal, when it threatens to cross a line.

Jack Catterall, his challenger for the undisputed super-lightweight championship on Saturday night in Scotland, live on Sky Sports, may go through a gruelling few days before the fight even begins. 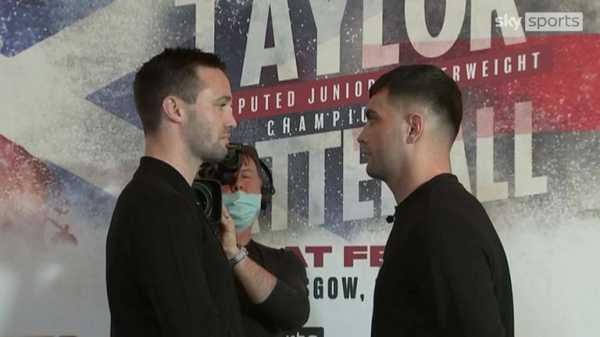 Josh Taylor and Jack Catterall engaged in a frosty staredown

It is all part of Taylor’s uniquely vicious way of winning inside the ring.

“Two or three days before the fight I just switch and turn into a completely different character,” he says.

His friends nickname him ‘Hank’ after Jim Carrey’s bad-tempered character in Me, Myself & Irene.

In boxing circles it is known as ‘flicking a switch’ – the moment a fighter abandons their usual persona and morphs into a new version of themselves.

“Sometimes my mind-set will change when I know that I’ll see the opponent,” Taylor says. “I don’t want to talk to the guy, I want to hurt him.

“I want to get my hands on him and give him a leathering.

“When my mind-set changes I begin picking at things to wind him up.

“I’ve always had the feeling during fight week that I want to beat him up.” 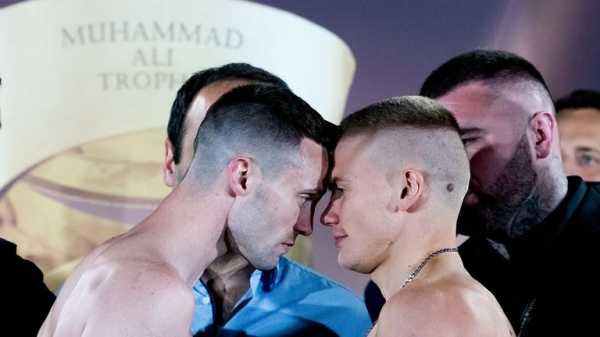 Image: Josh Taylor and Ivan Baranchyk get up close and personal

The first time Taylor used these psychological ploys was in a grudge match with Ohara Davies. He insists that their first face-off revealed Davies’ inner weakness.

“This was the first fight I had where there was bad blood between us,” he says.

“I knew straight away. From the first time that we met face-to-face, I knew.

“When our fight was announced he came to Glasgow for a press conference. I knew straight away that I had the beating of him.

“It was his body language. I could tell straight away by his actions and how he was looking at me.

“I can tell if they are intimidated or confident or shy.

“Then I can feed off it.

“In person? He was like a mouse. He is brave online but not in person.

“I’m not like that. So when I met him? I immediately knew I’d beat him.”

There was an incident where Taylor approached Davies in an airport, which he also drew strength from.

“I walked up to him. I confronted him because of what he was saying online. I don’t respect mouthpieces.” 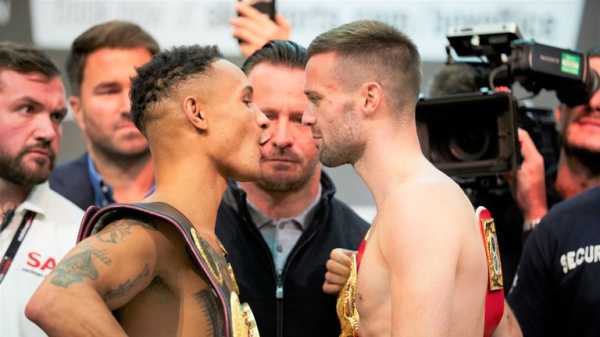 Image: Prograis and Taylor had a heated rivalry

“I thought he was nervous on The Gloves Are Off,” Taylor says.

“I could just see, before the cameras were on, his body language.

“I don’t put on a persona. What you see is what you get. I have no alter-ego.”

Jose Ramirez, like Taylor, was undefeated and held two world championship belts. They would clash in Las Vegas to decide undisputed supremacy.

But Ramirez’s reputation as a quiet and respectable man who worked tirelessly for charities made it difficult for Taylor to whip up a rivalry. 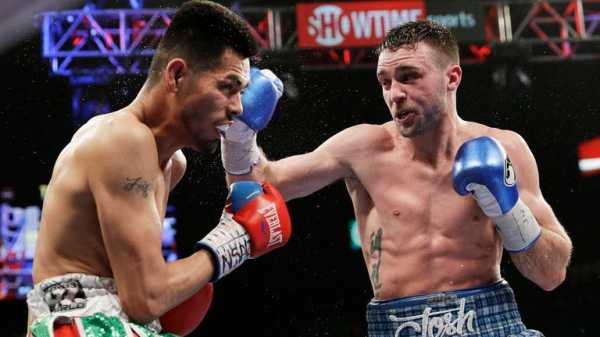 “This is different because I knew that he is a nice guy,” he says.

“So I had to find something that I didn’t like about it.

“I ended up getting annoyed by the way he sounded when he spoke! I just had to find something!

“I told myself that I didn’t like the way he spoke.

“But by the Wednesday of fight week, I hated the guy. No matter who was in front of me, I hate them and I want to hurt them.”

Taylor looked deep into Ramirez’s eyes and was able to intimidate him during their face-offs: “I saw he was looking pale, sucked-in, dry eyes. I sensed he was a bit nervous.

“I told him: ‘You are struggling to make the weight but don’t use it as an excuse’. 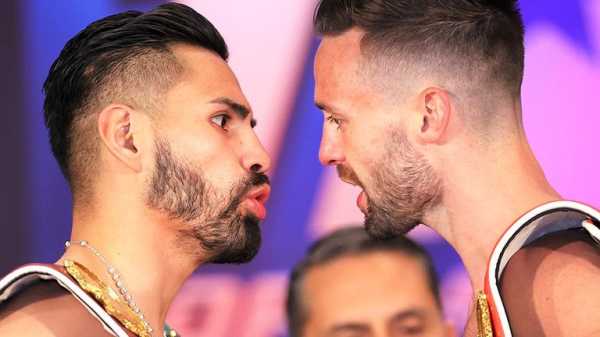 Image: Ramirez was hounded by Taylor

“I got into his head and I beat him mentally.

“In every aspect of the mind battles, I beat him.

“The final nail in the coffin for him was when I won the coin-flip to see who walked to the ring first and last. I chose to go last. I thought: ‘I have beat him at every single battle all week’.”

The most memorable occasion was in a hotel lobby when an ugly clash broke out – Ramirez was surrounded by his people, Taylor’s crew was much smaller.

“His brothers and his friends started mouthing at me,” Taylor says. “I pushed the button for the lift. Ramirez walks up to me and pokes me in my chest.

“There were hundreds of Mexican fans there.” 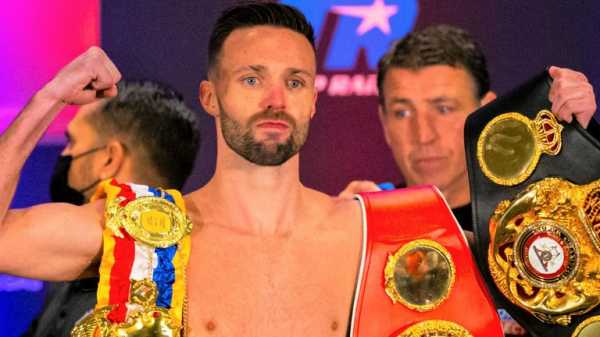 Taylor convinced himself that he was in Ramirez’s backyard and was a stranger with a point to prove.

“In America I felt that everything was against me. It said ‘Ramirez vs Taylor’ on the poster. Why? I know now that it’s a small thing.

“The three judges that were selected were all American. Then the referee was Kenny Bayliss – he was the one referee I did not want.

“The odds were stacked against me so I wanted to hurt Ramirez.”

It will be different this week – Taylor’s title defence against Catterall is his homecoming fight in Scotland but expect the same shenanigans in the days before battle. 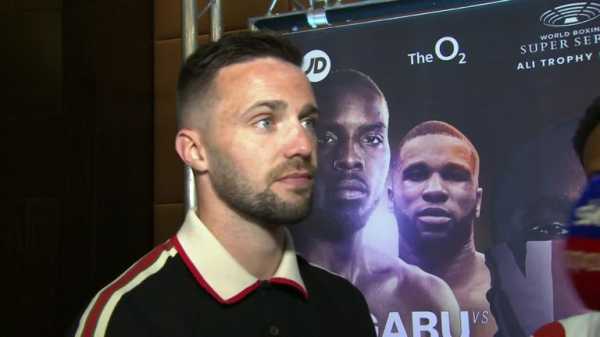 “There are psychological games going on all the time,” he warns.

“But you try to beat them mentally before you get in the ring.”

Can he get into Catterall’s head?

“It’s a case by case basis. I never go into a fight thinking: ‘How do I play mind games?’

“But you size them up. Suss them out.” 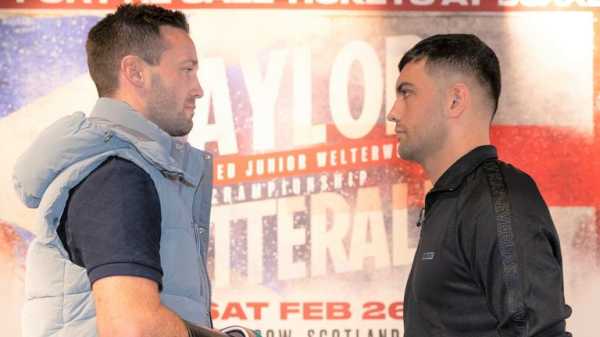 Josh Taylor respects fellow boxer Jack Catterall as a good fighter but suggests that he will come up short when it comes to the pair meeting on the February 26th.

Taylor learned these street smarts from his childhood and has now come full circle.

“This is me. This is who I am. If someone sticks it on me, I will stick up for myself whether there is a camera there or not.

“That’s from growing up. I was a shy kid, I would never ask for what I wanted. I would go out of my way to avoid confrontation.

“But I would defend myself. And I have a short temper.

“I’m calm and nice, and I hate confrontation, believe it or not! If I know there will be an argument, I’d rather walk away. But if it’s put on me…”