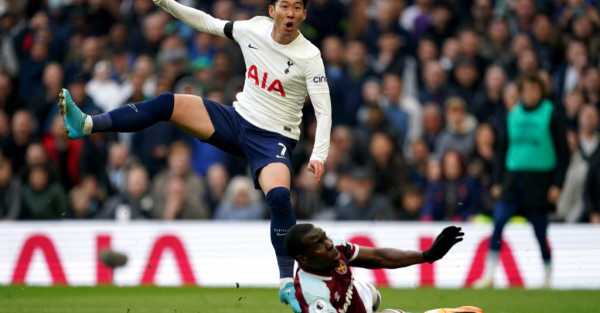 The South Korean scored twice, having also been involved in Kurt Zouma’s own goal, as Spurs made it four Premier League victories from five to close the gap on fourth-placed Arsenal.

They are now three points behind the Gunners, who have a game in hand but still have to visit their north London rivals in a clash that is yet to be rescheduled.

Antonio Conte’s men, who also climbed above the Hammers, will believe they have the momentum in the battle for the top four as they signed off for the international break in style.

This was a damaging defeat for West Ham, who got on the scoresheet through Said Benrahma, in their own pursuit of the top four as they are six points behind the Gunners having played two games more and winning the Europa League may now be their most realistic route of getting Champions League football next season.

The Hammers’ exertions against Sevilla on Thursday night must have played a part as Tottenham made an impressive start and went ahead in the ninth minute, becoming the beneficiaries of another own goal.

Matt Doherty won the ball high up the field with some good pressing, Harry Kane squared to Son and the last touch came from Kurt Zouma – the sixth time an opposition player has put through his own net against Spurs this season.

West Ham should have levelled almost instantly as Eric Dier was muscled off the ball by Michail Antonio, but he drilled inches wide.

A matter of inches also denied Spurs a second shortly afterwards as a forging run by Dejan Kulusevski, followed by a one-two with Kane, saw him break into the box and his pullback was turned onto a post by Son.

The South Korean finally got his goal as Spurs doubled their lead in the 24th minute as he again paired up with Kane.

Kane’s defence-splitting pass sent him clear and he lashed the ball past Lukasz Fabianski with the aid of a deflection.

Spurs were in total control, but they allowed West Ham back into the game 10 minutes before the break as they were punished for some poor defending.

Doherty conceded a needless corner which was allowed to make its way to the far post where Benrahma was waiting to convert, having lost his marker.

The second half was on a knife edge as both sides had chances in the first 15 minutes.

Kane wasted a massive chance to make it 3-1 as a heavy first touch from Son’s through ball allowed Fabianski to come out and make a save, while Antonio blazed well over at the far post from Aaron Creswell’s cross.

Spurs began to find space on the counter-attack and had Sergio Reguilon any sort of confidence in the penalty area he might have been able to extend the lead, but after two Kane passes put him in the clear, he first elected to go down looking for a penalty and then shot straight at Fabianski.

The England captain was then guilty of missing a golden chance to wrap the game up with 10 minutes remaining.

A clever pass by Pierre-Emile Hojbjerg played him in on goal, but Kane skied his effort when trying to clip the ball over Fabianski.

Spurs finally ensured it would not be a nervy finish as Son killed the game in the 88th minute, latching onto Kane’s header and converting with ease for the pair’s 39th goal combination in the Premier League.