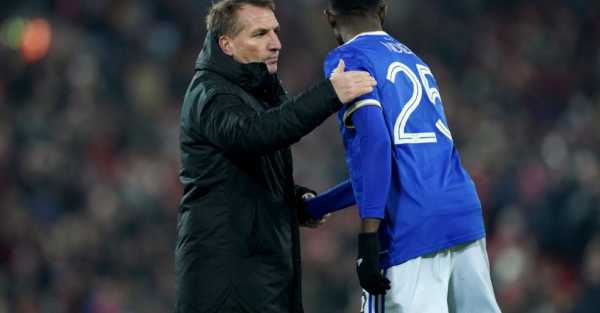 Leicester boss Brendan Rodgers revealed there was doubt over whether Wilfred Ndidi will play again this season following the 2-1 victory over Brentford.

Midfielder Ndidi missed the Premier League contest at the King Power Stadium due to a knee injury, having been forced off – like winger Marc Albrighton – during Thursday’s Europa Conference League match at Rennes on Thursday.

And giving an update on the pair after the win against the Bees, Rodgers said: “Marc hopefully should be back close to after the international break, if he’s not back by then. It’s just a tweak in his groin.

“Wilf’s not so good. We’re just waiting for a second opinion on that but whether he’ll play for the rest of the season or not, we’re unsure, which is a real, real shame for us.”

Rodgers stressed the picture overall with regard to injuries was looking “much healthier and much more competitive for us” following a match in which Timothy Castagne marked his return from a thigh injury in style.

The Belgium full-back, making his first appearance since December, put Leicester ahead in the 20th minute by firing into the top corner from just outside the box.

That was the first of two superb Leicester goals, with James Maddison doubling the advantage 13 minutes later by curling home a delightful free-kick.

Rodgers said: “I think you virtually expect James in that position to score, and that’s the real mark of how talented he is.

“It’s perfect position for him, that side of the field, 25 yards out. He’s got tremendous quality in that position.

“It was a wonderful free-kick, the two goals we scored (were). Obviously Timothy I think everyone was surprised, even himself, with his goal. Both goals were high-quality.”

A second half that included the fit-again Jonny Evans also getting a first run-out since December, coming on for Castagne, saw Kelechi Iheanacho hit a post early on.

Brentford were then denied by some good Kasper Schmeichel saves, and subsequently pulled a goal back through Yoane Wissa with five minutes remaining but were unable to rescue themselves from defeat.

Rodgers – whose side moved up to 10th in the table – said: “I thought it was an excellent win for us. I thought in spells we played some great football.

“I demand more from us in the second half in terms of the care with the ball. But when it’s not as precise as you need, to have that resilience and mentality to defend like we did. I take my hat off to the players.”

Brentford, still 15th, eight points above the relegation zone, were without Christian Eriksen due to coronavirus.

Boss Thomas Frank said: “I knew already Monday or Tuesday. Of course he is a top player, we would have liked him on the pitch. It would have given us a better chance.

“But I still think we did well enough, especially in the second half, to get something out of this. And I don’t think he could have avoided the two goals going into the top corner.”

Eriksen, who joined Brentford on a free transfer in January seven months on from suffering a cardiac arrest on the pitch at Euro 2020, was recalled to the Denmark squad earlier this week.

Asked when he expected his compatriot would link up with Denmark, Frank said: “I don’t know exactly, that’s between Eriksen and the national team.

“I think that (Eriksen playing for Denmark again) will be fantastic.

“I think it was a big milestone when he came on against Newcastle (last month for his Brentford debut), the next milestone is to play for Denmark, definitely in Parken (Stadium), and after that it’s football.”