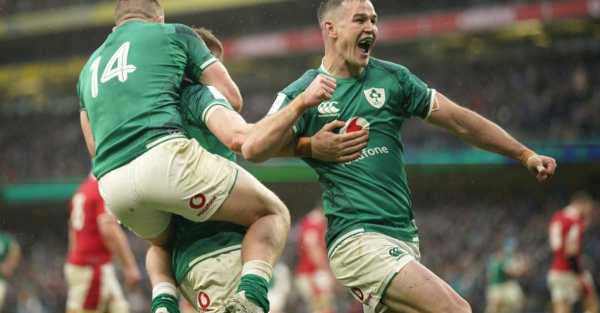 The influential fly-half, who admits every Test match could be his last, is pushing for a recall for Sunday’s clash with Italy after being a frustrated spectator for the round-two loss in Paris due to a minor hamstring issue.

Ireland are scheduled to return to Stade de France for up to five matches at the 2023 World Cup, including pool stage meetings with South Africa and Scotland.

Sexton was engulfed in a raucous atmosphere in the French capital on February 12 and is determined to go back there for one final shot at the sport’s top competition.

“Every opportunity you get to play in the green jersey when you’re my age, you know it could be your last,” said the 36-year-old, who has 102 Ireland caps.

“It could be your last of that fixture; I hope it’s not my last in the Stade de France as there are some pretty important World Cup games there that I would love to be a part of.

“That’s not what I was thinking at the time. I was disappointed to miss such a big game, the biggest game we’ve had in a long time.

“During the game, I tried to soak in the atmosphere, feel what it’s like in the stadium and use it as motivation to get there (the World Cup).

“We’ve got two pool games, we’ve got a potential quarter-final, potential semi-final, final all in that stadium, so I tried to soak in as much of it as I could.”

Ireland’s Grand Slam dreams and nine-match winning streak were halted by the 30-24 loss, which put Les Bleus in pole position for championship glory.

After hosting the Italians in Dublin this weekend, Andy Farrell’s men – who began by defeating Wales – travel to England on March 12th before completing the tournament at home to Scotland a week later.

Sexton, who is hoping to regain the number 10 jersey from deputy Joey Carbery, has not given up on the title and is targeting three consecutive victories which would seal a Triple Crown – victories over England, Scotland and Wales.

“We spoke about that if we win our last three games we’re guaranteed a Triple Crown,” he said.

“I suppose I came from an era where they were winning Triple Crowns for fun but then when you look at the history, I think we’ve won nine Triple Crowns (since start of Five Nations), which is fairly few when you think about it over the last hundred years.

“That would be a great thing and it’s guaranteed if we can win the last three.

“Of course, we’ll give ourselves a great shot at the title if we win our last three; France have to go to Scotland this week and then Wales and play a good England team in the Stade de France as well.

“It’s not over but we have to hold up our end of the bargain. It’s all to play for but it’s all to do as well.”

Italy will run out at the Aviva Stadium bidding to avoid a 35th successive Six Nations loss.

With the championship standings finely poised, Sexton admits securing a bonus-point win and boosting the team’s points difference is important.

“It’s something we’re mindful of from the get-go, from the first game,” he said.

“We know that every point will count but you can’t get too drawn into that.

“How we do it is getting our performances right, getting our processes right and then going out and executing and if we can do that then the rest looks after itself.”