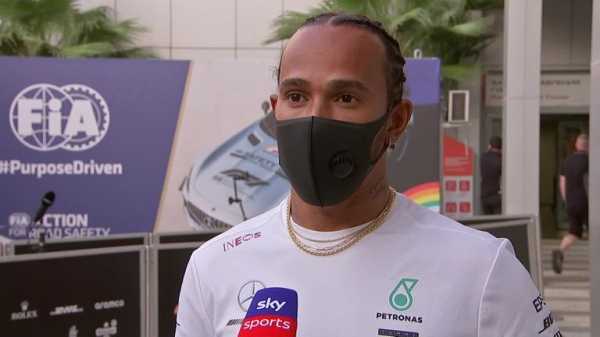 Lewis Hamilton wants to continue to inspire change after being named in Time magazine’s 100 most influential people of 2020.

Lewis Hamilton expects new guidelines to be issued around the messaging that can be displayed by drivers after he wore a T-shirt at the Tuscan GP about the shooting of Breonna Taylor.

But the Mercedes driver made clear he had “no regrets” about wearing the T-shirt before the race and on the podium, and that he will continue working with F1 officials to find “common ground” in campaigning for equality.

Hamilton said that by wearing the T-shirt – which featured the message ‘Arrest the cops who killed Breonna Taylor’ on the front – he was highlighting “human rights issues”.

The FIA was understood to have looked into the matter after the September 13 race and, although no formal investigation was launched into the six-time champion, fresh guidelines on pre and post-race procedures, including what drivers may or may not wear, had been expected ahead of this weekend’s Russian GP.

“I haven’t spoken to them but I have heard that tomorrow they will come out with a new ruling of some sort saying what you can and cannot do,” said Hamilton in Thursday’s FIA press conference in Sochi. 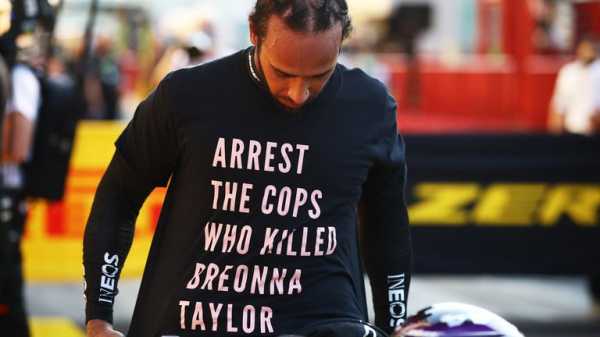 “I will just try to continue to work with them. Whether or not I agree or disagree is kind of irrelevant, it’s just trying to find a common ground in how we can do it together, maybe.

“So do I believe that they fully understand? I don’t know, but perhaps in the future we all will to the same extent.”

Hamilton, who has been a powerful and passionate voice amid the Black Lives Matter movement and calls for racial equality, said a sport with such a big global following as F1 “should definitely be pushing positive messages” to those watching.

“What was really positive was the support that I got from the fans. The fans have been amazing,” said Hamilton. “I don’t regret a single moment of it. I usually follow my heart and do what I feel is right and I felt that was me following my heart.

“I also did something that’s never really happened in Formula 1 and obviously they’ll stop it from happening moving forwards, but people do talk about sport not being a place for politics and ultimately it’s human rights issues and, in my opinion, that is something we should be pushing towards. 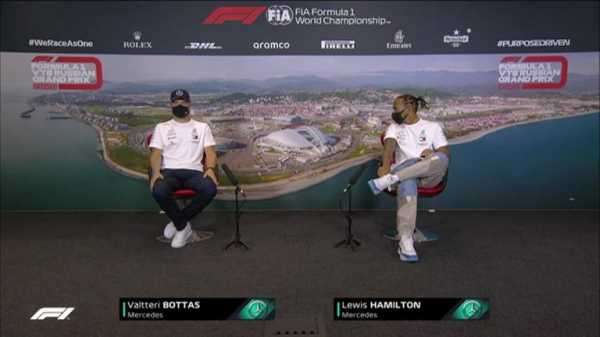 21:46 Mercedes drivers Lewis Hamilton and Valtteri Bottas have spoken ahead of this weekend’s Russian Grand Prix.

“We have a huge group of amazing people that watch our sport from multiple different backgrounds and cultures and we should definitely be pushing positive messages towards them – especially for equality.

“We push towards road safety, you could say that’s almost human right’s also.

“I don’t know what they’re going to do this weekend but lots of rules have been written for me over the years, that hasn’t stopped me.

“But I will do is try to work with Formula 1 and the FIA to make sure the messaging is right. Could it be better? Of course, it could always be better, but that’s part of the learning curve.”

Hamilton believes the events of Mugello can only help drive important conversations.

“As a business and as an organisation they’ve got obviously certain limits that they feel they have to work within,” said Hamilton of the FIA, which is a non-political organisation.

“Obviously trying to make everyone happy which is obviously what they’ve tried to do, and do the right thing. Again, I think this is a learning process for everyone because people have been happy with the norm here of how life and society has operated, but ultimately the world and the younger generation particularly are more conscious that things aren’t equal and change is needed.

“It does take conversations with people and things like Mugello happening for people to spark a conversation that perhaps would never have taken place if it didn’t happen.” 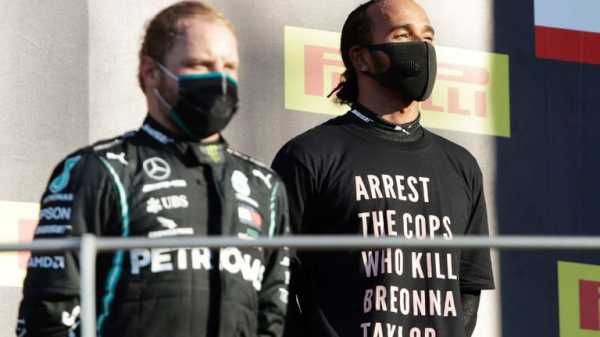 Hamilton ‘sad but not surprised’ by grand jury verdict

Taylor, an aspiring nurse, was shot and killed in her own home by three plain-clothes Louisville police officers in the United States in March.

On Wednesday, a decision was taken not to charge any of the officers with her murder.

Writing on Instagram, Hamilton said: “I’m so sad but not surprised at this outcome. Police continue to get away with murder every single day and it needs to stop! She was innocent and did not deserve to be shot and killed. Where is the justice, this clearly isn’t it!

“It hurts to know somebody was killed and nobody was held accountable. Imagine that was your mum, your brother or sister or friend, her life mattered but the system which was meant to protect her failed her all because of her skin colour. So mad.”