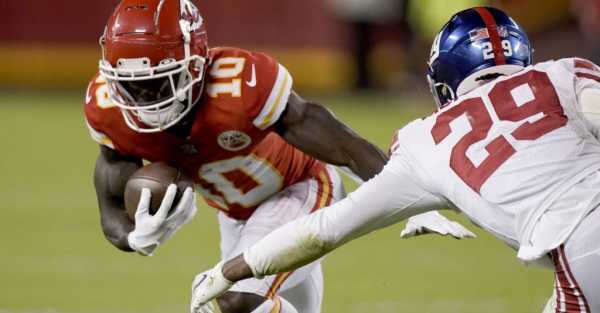 The Kansas City Chiefs were unconvincing but secured a win after taking the lead in the final minutes to defeat the New York Giants and improve to 0.5 on the season.

The visitors slowed down the Chiefs’ offence by using up to seven defensive backs on certain plays, with home quarterback Patrick Mahomes struggling to complete downfield throughout as he mixed one touchdown with an interception.

Tyreek Hill was a rare bright spot for Kansas City as the wide receiver caught 12 of 18 throws for 94 yards and a touchdown.

The Chiefs running back Derrick Gore recorded his first professional score halfway through the second quarter on a three-yard run to the corner before kicker Graham Gano made a 23-yard field goal to have the Giants chasing their hosts 14-10 at the break.

The second half was scoreless until New York tight end Evan Engram hauled in a five-yard touchdown pass from quarterback Daniel Jones at the start of the fourth quarter to put the Giants ahead for the first time.

Minutes later Kansas City kicker Harrison Butker made sure of his 36-yard attempt to tie the score at 17-17 before he nailed a 34-yarder to put the Chiefs ahead for good, and leave them with four wins and four losses, with one minute and seven seconds left on the clock.