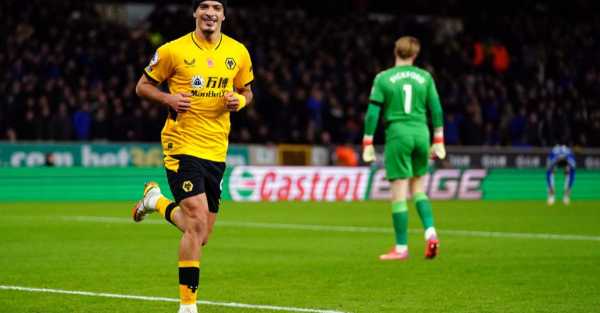 Raul Jimenez bagged his first Molineux goal for over a year to inspire Wolves to a narrow 2-1 win over Everton.

The forward, fit again after recovering from a life-threatening fractured skull 12 months ago, scored at home for the first time since October 2020.

It was also his 50th goal for Wolves – and second of the season – as the Mexico international proved beyond doubt he has lost nothing following the horror injury.

Max Kilman’s first goal for the hosts set them on their way and they now sit seventh in the Premier League.

They lost four of their first five under Bruno Lage but are now unbeaten in five games, winning four, to join the clutch of clubs around the European spots.

Wolves moved above Everton, despite Alex Iwobi’s second-half goal threatening a comeback following the Toffees’ aimless first half, and Rafa Benitez’s side have lost their last three.

In front of watching England boss Gareth Southgate, Pickford was in action again soon after when he turned Francisco Trincao’s fine 25-yard effort over.

Yet even Pickford needed bailing out by VAR when Hwang Hee-chan broke through after 18 minutes as Everton struggled to contain the bright and efficient hosts.

Jimenez’s fine run ended with him slipping in Hwang, who squeezed the ball into the corner from six yards, but Wolves’ celebrations were cut short with the striker fractionally offside.

Everton were clearly smarting from last week’s 5-2 humbling at home to Watford and appeared to have picked up where they left off during the chaotic late defeat.

Then, the Toffees conceded four in the final 12 minutes and they imploded again by conceding two in four minutes thanks to calamitous defending.

After 28 minutes Jimenez won a corner for Rayan Ait-Nouri to sling in and Kilman beat Michael Keane, Andros Townsend and Ben Godfrey to head past Pickford.

It was the defender’s first goal for Wolves, with his only other career strike coming for Maidenhead against Dover three years ago.

Then Jimenez got the goal he had waited over a year for when Godfrey gift-wrapped it for him.

The defender’s woeful back pass lacked any weight to reach Pickford and Jimenez caught Holgate on his heels to race through and dink the ball over the exposed goalkeeper.

Despite Wolves’ dominance Demarai Gray and Holgate missed fine chances at the end of the half and Fabian Delph replaced Jean-Philippe Gbamin – who made just his second league start for Everton since joining in 2019 – at the break.

Anything above the lacklustre first half would have been an improvement and the Toffees showed glimpses of a fightback, Kilman blocking a Gray drive, before Jose Sa escaped embarrassment 10 minutes after the break.

The goalkeeper’s clearance was charged down by Richarlison but he recovered in time to deny the striker.

The much-improved visitors then survived when Jimenez’s header hit a post before Iwobi struck to test Wolves’ nerves with 24 minutes left.

Godfrey’s speculative drive from distance was blocked by Coady but it fell straight to the previously anonymous Iwobi to finish under Sa.

Wolves regrouped and Trincao poked wide while referee Martin Atkinson changed his mind after initially awarding a penalty for Holgate’s foul on Trincao, only to give a free-kick outside the box.

Sa then clinched Wolves’ win with a stunning one-handed save to turn away Anthony Gordon’s header with four minutes left.