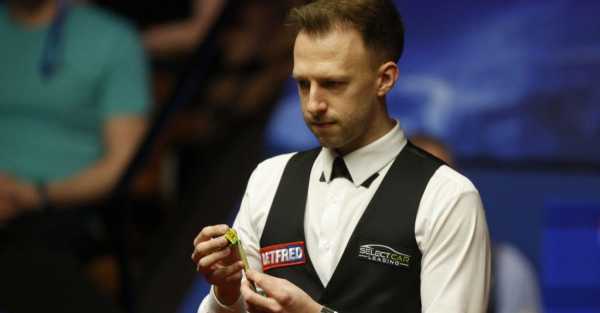 Trump saw a 12-5 lead evaporate as the Welshman clawed his way back to lead 16-15 and threaten what would have been the greatest semi-final recovery in Crucible history.

But having gone behind for the first time, Trump hauled back level then produced two outrageous cross-doubles to nudge over the line in a tension-filled decider and seal a 17-16 win.

Trump had taken the first frame of the final session with a cool clearance of 64 to temporarily blunt Williams’ momentum and re-establish his three frame advantage at 14-11.

And Trump was unlucky not to extend his advantage in the next after kicking the pink into the path of the yellow after potting the last red, the Welshman wresting back the initiative with a brilliant clearance to pink.

Both players missed chances in the next, which Williams won to move within one frame of his opponent for the first time since the opening frame of the match, and a nerveless 137 clearance saw him tie at 14-14 at the mid-session interval.

At that point Williams had won nine of the last 11 frames but Trump once again proved undaunted, wiping up a messy 29th minute in which both players missed good early chances, to move within two of victory.

Williams responded with a 138, his fourth century of the match that took his tally for the tournament to 16, equalling the single-year record set by Stephen Hendry in 2002.

The Welshman proceeded to take the lead for the first time after winning a titanic 31st frame, in which Trump chiselled back a 33-point deficit only for Williams to pull off a series of stupendous pots on the colours to move one away from victory.

Trump got the chance to post a frame-winning break after capitalising when Williams rashly split the pack of reds, and although despite missing what was effectively a frame-ball red, he got another chance and forced the decider that the game deserved.

Both players milked a lengthy standing ovation prior to the decider, in which Trump seized the advantage after laying Williams in a tight baulk snooker behind the yellow with the reds split.

Williams fluked a red upon his escape but missed the following blue to the middle, leaving Trump with a scattered table which the 32-year-old exploited to the tune of a 49 break which put him on the brink of the final.

Despite leaving a red dangling over the top pocket, Williams could not take advantage of a difficult table, and two exhibition shots helped Trump over the line despite a futile attempt by his opponent to get the three snookers he required.

Ronnie O’Sullivan is two frames away from facing Trump in the final after winning five of the eight frames in the penultimate session of his last four clash against John Higgins.

Resuming 10-6 in front after clinching a thrilling last frame on Friday night on a re-spotted black, the 46-year-old secured a 15-9 advantage to surely make Saturday evening’s finale a formality.

Despite firing three centuries, O’Sullivan was clinical rather than vintage as he mopped up after a succession of Higgins mistakes, the Scot showing his frustration by slamming his cue into the floor when he let his opponent in early in the 22nd frame.