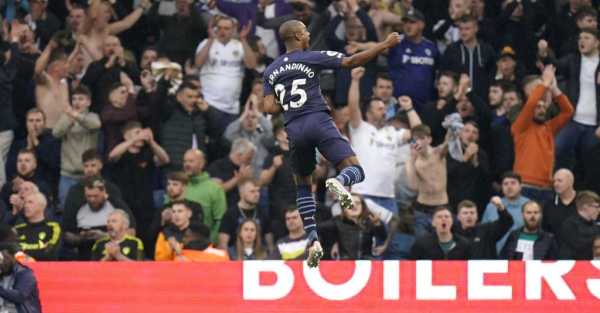 Manchester City edged their noses back in front of Liverpool in the Premier League title race after a 4-0 win at Leeds.

Rodri headed City into a half-time lead and further goals in the second period from Nathan Ake, Gabriel Jesus and Fernandinho lifted them back to the top of the table.

City boss Pep Guardiola made five changes after his side’s midweek Champions League win against Real Madrid, but it made little difference as they marched on in defence of their domestic crown.

They secured a third straight league win for the first time in 2022, but it was not the walk in the park the scoreline would suggest against an embattled Leeds side hungry for points in their fight to beat the drop.

Leeds were much-improved following Monday’s goalless draw at Crystal Palace, but their first league defeat in six games leaves them one place and five points above third-bottom Everton, who have two games in hand.

City were almost caught cold in the opening minutes when Rodrigo raced unopposed from halfway after a slip by Joao Cancelo, but Ilkay Gundogan rescued his team-mate with a vital block in the box.

Leeds had been dealt another injury blow before kick-off when skipper Liam Cooper limped out of the warm-up and was replaced by Mateusz Klich.

Robin Koch switched back to centre-half alongside Pascal Struijk and Leeds’ new-look defence was undone in the 13th minute.

Stuart Dallas was penalised for his foul on Raheem Sterling and Phil Foden’s excellent outswinging free-kick was headed home by Rodri, who ghosted on to the ball unopposed.

Leeds saw little of the ball, and showed little cohesion when they did, until the half-hour mark when they began to pose City some problems.

Junior Firpo rifled a shot over the crossbar and as Leeds exposed gaps in City’s final third, Raphinha threatened in and around the box.

But it required a brilliant sliding block from Struijk to prevent Sterling from adding City’s second goal after Luke Ayling’s mis-kick inside the area in the 43rd minute.

The home side’s wretched luck with injuries this season continued in first-half stoppage time when Dallas twisted his knee in a 50-50 challenge with Jack Grealish and was carried off the field on a stretcher.

Leeds began the second half well, forcing City on to the back foot, but the visitors twice served warning with swift counter-attacks and doubled their lead from another set-piece in the 54th minute.

Foden’s corner was headed goalwards by Ruben Dias and Ake turned to sweep the ball home from six yards at the far post.

Ake hobbled off soon after and was replaced by Oleksandr Zinchenko before Leeds went close through Raphinha, whose shot was deflected over by Aymeric Laporte after he had burst into the box.

But City put the game to bed with an excellent third goal in the 78th minute. Ederson’s clearance was chested into Foden’s path and his through-ball was buried by Jesus.

Cancelo was denied in a one-on-one by Illan Meslier soon after, but to their credit Leeds went down fighting.