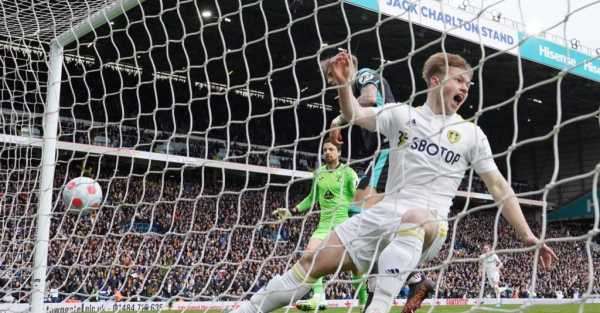 In a breathless finish, Leeds had let slip a slender lead after Rodrigo’s early opener only to end up snapping a club record equalling six-game winless run and secure head coach Jesse Marsch’s first win in charge at the third attempt.

In truth, Leeds should have been out of sight against Dean Smith’s basement side as Raphinha twice struck the crossbar and Patrick Bamford fired wide with just Norwich goalkeeper Tim Krul to beat.

But with just a one-goal deficit Norwich never gave up and looked to have snaffled a point when McLean turned home an equaliser at the death before Gelhardt struck.

Rodrigo fired Leeds into a 14th-minute lead, lashing the ball home via a slight deflection from just inside the penalty area following Diego Llorente’s long ball over the top.

Raphinha will be disappointed not to have made it 2-0. He missed the ball completely while attempting to convert Stuart Dallas’ cut-back after a sweeping Leeds counter-attack.

Leeds defender Luke Ayling was lucky to escape with a caution following a VAR check for his high challenge on Milot Rashica before Raphinha almost made amends for his earlier air-shot in spectacular fashion.

Leeds swept forward again and the Brazilian volleyed Bamford’s deep cross from the left against the underside of the crossbar.

The home side went close again as Krul saved Pascal Struijk’s header from a corner, with the Leeds centre-half blazing his follow-up off target.

Leeds fans were furious when VAR failed to intervene after Dan James appeared to have been shoved to the floor in the area by Brandon Williams.

Bamford was next to pass up a golden chance, skewing his side-footed effort wide with just Krul to beat after being slid in by Raphinha.

It was a much-improved first half from Leeds, but they just had a 1-0 lead to show for their dominance at the interval.

Bamford’s return to action lasted 45 minutes as he was replaced by Jack Harrison during the break.

Leeds thought they had forced the crucial second goal in the 52nd minute, but James had strayed offside before turning in Raphinha’s blocked shot.

Rodrigo was withdrawn to a standing ovation on the hour-mark and replaced by defensive midfielder Robin Koch, but Leeds continued to press for that second goal.

James’ curling effort was well saved by Krul and despite forcing Norwich into retreat, Leeds’ final pass was found wanting.

Norwich served warning as substitute Jonathan Rowe curled a shot against the crossbar, but the linesman flagged for offside.

Leeds were given another reprieve when VAR asked referee Stuart Atwell to check the monitor after he had initially awarded a penalty for Ayling’s challenge on Rashica.

Replays clearly showed Rashica had gone down after standing on Ayling’s leg.

Raphinha struck the crossbar again in the 82nd minute with a sweetly-struck free-kick and Norwich appeared to have punished Leeds in the dying moments when McLean latched on to Teemu Pukki’s cross.

But Leeds poured forward from the restart and with the clock ticking down Raphinha burst clear to round the goalkeeper and tee-up Gelhardt, who sparked delirium at Elland Road when drove home the winner from six yards.

There was still time for Pukki to threaten another goal, but Illan Meslier produced a fine reaction save just before the final whistle.