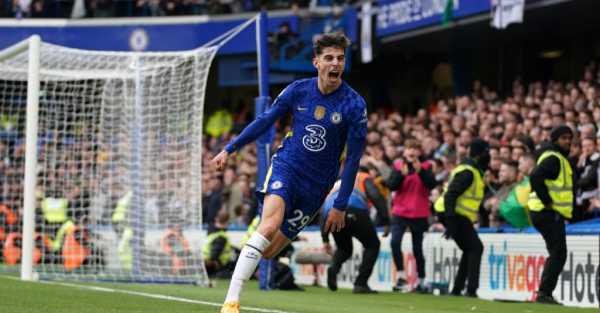 Thomas Tuchel’s relief was writ large by the Blues’ German boss launching himself onto the field in exuberant celebration as Havertz netted the winner.

The former Paris St Germain boss spun to the crowd to join the Chelsea fans in a moment that saw all the Blues’ worries on the future drain away for just a split second.

Havertz’s 11th goal of the season proved enough to topple a resolute and disciplined Newcastle, on a day where Chelsea’s off-field problems dominated proceedings from first to last.

But just when the Blues were fretting on a niggling draw, up stepped Havertz to sink Eddie Howe’s robust Newcastle, whose nine-match unbeaten run in the Premier League was ruined in heartbreaking fashion.

Chelsea’s turbulent week ended with the Blues’ experiencing the limbo ushered in by the UK Government sanctions on owner Roman Abramovich for the first time at their west London home.

Two prospective Blues owners were even in the crowd, with both Nick Candy and Sir Martin Broughton among those to witness Havertz’s late moment of magic.

Supporters had trouble sticking solely to footballing matters, with no programmes able to be sold at Stamford Bridge, the club shop shut and Blues staff still worrying about their jobs.

Abramovich was sanctioned by the Government on Thursday, with Tory chiefs claiming to have proved the Russian-Israeli billionaire’s links to Vladimir Putin.

The 55-year-old Chelsea owner has always denied links to the Russian President, but the war in Ukraine has provided a major geopolitical shift.

Abramovich’s 19-year and 21-trophy tenure is at an end, with the Government now overseeing Chelsea’s sale amid ever-increasing suitors for the European and world club champions.

In a staccato first half, all the real rhythm came from the opposing supporters’ repartee.

Chelsea’s fans in the main opted against chanting for owner Abramovich, with Tuchel’s name the first to escape Blues lips en masse.

Newcastle’s fans wasted no time in poking the Chelsea bear though, piping up with ‘no noise from the bankrupt boys’.

Chelsea hit back with ‘Champions of Europe, you’ll never sing that’, before Newcastle chorused ‘Mike Ashley, he’s coming for you’.

The Chelsea supporters could not resist a riposte of ‘Boris Johnson, he’s coming for you’, before Newcastle had the last word with ‘you only sing when you’re loaded’.

Chelsea’s first effort on target did not come until the 76th minute, when Havertz flicked Hakim Ziyech’s teasing cross goalwards.

Havertz could only trouble Martin Dubravka into a regulation save, but somehow he kept his best for last.

Just when all in Stamford Bridge geared up for the draw, Havertz stole in to tell west London otherwise.