Former Ireland captain Brian O’Driscoll hopes Jordan Larmour is included in the Irish team to play Italy in the Six Nations this weekend.

The 20-year-old has been in flying form with Leinster, scoring six tries in 14 appearances.

O’Driscoll believes the Italy match is the perfect way to acclimatise to international rugby.

“Jacob Stockdale’s not done a whole lot wrong. He didn’t have his best game ever (against France), but he was relatively quiet,” said the former captain.

“Does he (head coach Joe Schmidt) give them another go against Italy or does he get brave and put Jordan Larmour in?

“I think it’s a good game to put him (Larmour) in, personally. If he (Schmidt) wants to see him in that World Cup squad in Japan in 2019, I think this is a good game to start him with.”

Assistant coach Richie Murphy has said Larmour is “very close” to making his Test debut, adding to speculation he will get the nod to play against Conor O’Shea’s Italy. 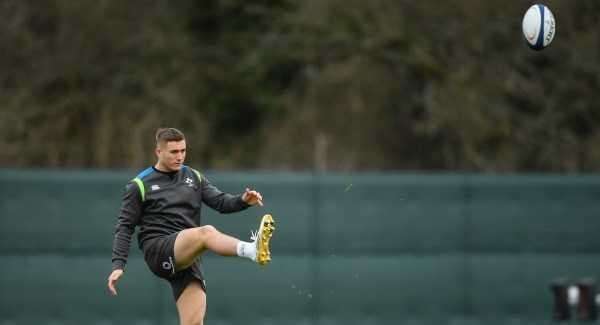 Murphy hailed the full-back for hitting his stride with little delay after stepping into Ireland’s senior squad for the first time.

Following last weekend’s punishing 15-13 win in France, it is believed Schmidt could make a clutch of changes.

Joey Carbery will be pushing for a start at fly-half, but Murphy insisted Ireland do not need to hold back frontline playmaker Johnny Sexton, following his last-gasp drop-goal winner in Paris.

“It is just a matter of whether it is right this week or not and that will come down to the selection process, but we are not looking at him and saying ‘he’s not ready’.

“Every Six Nations game is one you have to win which makes it different from November.

“We have such a strong squad we do feel comfortable in every player so we’ll have a look at it.

Meanwhile, Devin Toner could return the side, as Schmidt is said to be considering rotating his front five.

James Ryan has started Ireland’s last two games in the second row, but Toner says he is working hard to get back into first XV.

“I was always the first one to say he (Ryan) is a phenomenal talent.

“I think I just have to change my mindset to what I needed to do when I come off the bench.

“It’s a different training week for if you’re on the bench. You don’t get as many reps in training so it’s more of a mental game trying to prep yourself.

“Hopefully I put my hand up for selection this week.”

Ireland welcome Italy to the Aviva Stadium on Saturday, with kick-off at 2.15pm.

Schmidt is due to name his team on Thursday.