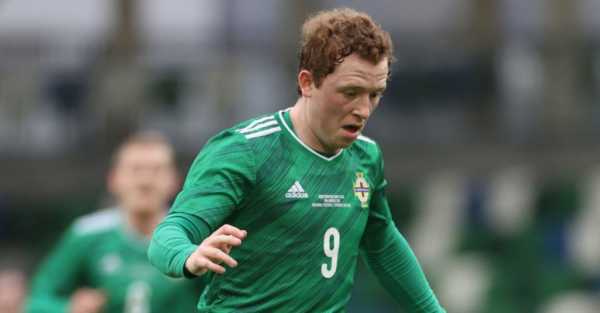 Ian Baraclough wants Shayne Lavery to add more composure to his game after welcoming the striker’s all-action approach back into Northern Ireland’s attack.

Lavery helped set the tone as Baraclough’s side made a strong start to Friday’s 3-1 friendly win over Luxembourg, first breaking into the box with just 20 seconds gone, then linking up with strike partner Josh Magennis again moments later before then firing narrowly wide.

But after Magennis put Northern Ireland in front, Baraclough’s side struggled to retain possession with the front pair often unable to hold up the ball, allowing Luxembourg to level through Marvin Martin’s second-half header before late goals from Steven Davis and Gavin Whyte won it for the visitors.

The early exchanges were a strong reminder of what Lavery can do after the Blackpool striker missed Northern Ireland’s final World Cup qualifiers in October and November through injury, unable to build on scoring his first international goal in September’s 4-1 win over Lithuania.

“The impact he made in September, not only scoring against Lithuania but creating several opportunities through his closing down and eagerness to get at defenders, harass them, and make them make mistakes – it’s something different for us,” Baraclough said.

“I have to say, Gavin Whyte has that in him and he’s done that and gone and created his own goal for the third one – he’s got away from the defender and it’s such a calm finish.

“That’s something Shayne has got to get into his game as well. I think there was a bit of untidy play as well, a bit of frustration for him and he’s got to learn. It’s a step up for him, international football, and you have to have that composure. But that will come.

“I was pleased certainly to have him back, his hustle and bustle. Defenders don’t like it at all.”

Lavery will now hope for another opportunity when Northern Ireland take on Hungary at Windsor Park on Tuesday night, a match where Baraclough will know his side will need a much better performance to get a positive result.

Northern Ireland allowed Luxembourg – a side ranked 93rd in the world – more of the ball and more shots at goal on Friday night, and the hosts arguably looked the more likely winners until Davis and Whyte struck two in three minutes late on.

Hungary, ranked 41st, have been drawn alongside Italy, Germany and England after gaining promotion to Nations League A last time out, and Northern Ireland will need far greater intensity than they showed at the Stade de Luxembourg to live with them.

“It will be a totally different challenge,” Baraclough said. “No disrespect to Luxembourg but Hungary are a side who are improving all the time. They’re going to be going and playing the likes of England in their group.

“Hungary will be a big test but we’ll be better for this win. We’ll go through it and prepare as well as possible, and any night under the lights at Windsor is always special.”

Baraclough is hoping to have Paddy McNair back available for Tuesday’s match, but confirmed that Conor Bradley will not feature to a knee injury.

Bailey Peacock-Farrell is due to join up with the squad after playing in Sheffield Wednesday’s 4-1 win over Cheltenham on Saturday, while Josh Clarke, the 17-year-old goalkeeper called up as cover for the Luxembourg match, will remain with the group.