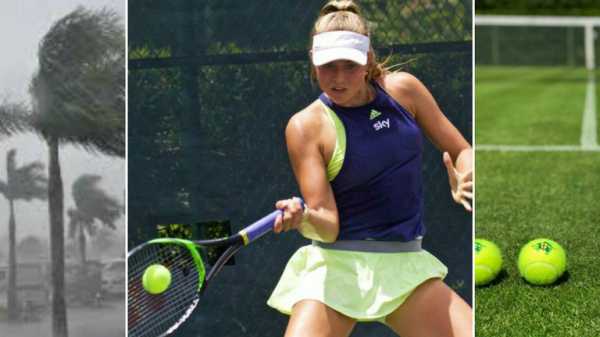 The 18-year-old Sky Sports Scholar will play in a big pre-Wimbledon event in Surbiton this weekend as she continues her battle as a pro closer to home.

Life’s hard enough for a teenage tennis star desperate to ascend the rankings (currently 612 in the singles, 453 in doubles) but the weather and unlucky odds in the tournament draws have not been helping the cause.

“The last few days have been tough,” Appleton said about a severely disrupted schedule in the United States.

“In four days I got on court for a total of three hours. This has meant my timing feels a little off and it’s been tough to fight off the sluggish feeling of not doing much all day.

“I finally played a singles match in Naples, Florida [my last match before flying to the UK] and managed to draw the top seed again for the second time in two weeks which is incredibly rare and unlucky.

Appleton’s fun in the American puddles started on May 14 after competing in Trinidad and Tobago.

Her stay started with a very positive and productive training week in Florida before travelling to Osprey for a tournament.

“I unfortunately drew the No 1 seed [for the first time this month] in the singles so that was tough,” Appleton added. “I lost but I felt good because it made me realise the difference in levels isn’t too far away. It made me excited to get back on court to work towards higher things.

“But the rain was a big issue and disrupted us throughout the week. I made the doubles quarter-finals and the delays were so bad it got cancelled which I’ve never experienced before.

“Tropical storm Alberto was brewing in the Gulf of Mexico for three weeks which is why we had so much torrential rain.

“Alberto was not giving in and players ended up withdrawing from the next tournament in Naples because they still had matches to play in Osprey! It was mad!

“And so now Naples is over I am heading back home to the UK in preparation for the grass court season. Finally!

“Grass is so different because it’s only really played on for about four weeks of the year and so it’s difficult to become accustomed to because you don’t get to practice on it much.

“It’s so different to other surfaces. It’s much faster, the ball shoots more and you have to stay super low and make small little tweaks and adjustments to your game.

“I’m hoping to get some grass training at the national centre [if it stays dry!] and then I’ll play in Surbiton in south London which is a preparation event for Wimbledon.

“The grass season is always one that Brits get excited for and I’m ready to take on some tough opponents and showcase my best tennis.”