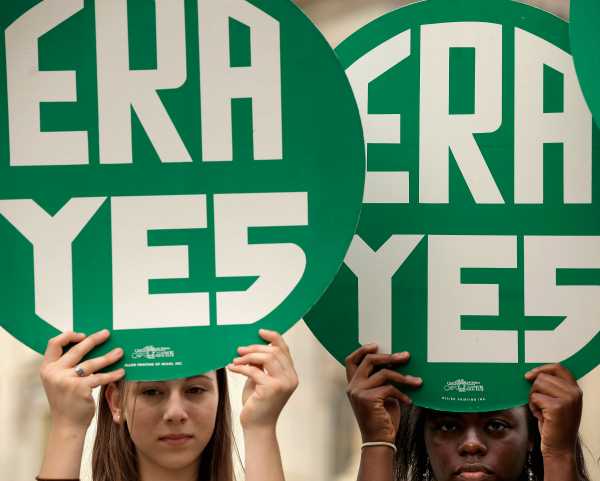 It’s taken 45 years for 37 states to ratify the Equal Rights Amendment, with Illinois’s vote on Wednesday to do so leaving it one short of the 38 states needed to enshrine a formal amendment in the US Constitution.

But there’s a legal debate raging about whether the deadline to ratify the amendment guaranteeing equal rights to women passed decades ago or if there’s a possible legal workaround.

Still, an unclear future is the brightest prospect for the amendment in decades. The amendment, which guarantees that “equality of rights under the law shall not be denied or abridged by the United States or by any state on account of sex,” passed Congress on a bipartisan basis in 1972, became a culture war battleground, and then, until last year, lay dormant, presumed to be a lost cause.

Its revival comes in the midst of the #MeToo movement, the Women’s March, and a moment of a sort of reawakening of feminism and women’s activism in America. Women are running for office at record rates in 2018, and Donald Trump’s victory — and Hillary Clinton’s loss — in 2016 has spurred a new wave of women finding their voices and insisting on equality. That’s translated not just to new causes but to the revival of old ones: For decades, Indiana, which ratified the amendment in 1977, was the 35th and last state to sign on. Then last year, Nevada became the 36th.

The Equal Rights Amendment had a lot of momentum behind it in the 1970s, and then it just sort of petered out

The Equal Rights Amendment dates back to the 1920s and came about after the 19th Amendment, which gave women the right to vote. It was first introduced by suffragist leader Alice Paul in 1923, and it has three simple parts:

The amendment gained momentum in the 1960s and ’70s, culminating with passage in the US Senate and the House of Representatives in 1972, which put it on track to become what would have been the 27th Amendment of the Constitution. It was sent to the states for ratification and put on a seven-year deadline.

Support was, initially, bipartisan and broad. In the first year after the amendment was passed, 22 states ratified it.

But opposition began to organize, led by anti-feminist conservative leader Phyllis Schlafly, who argued the ERA would erase legal differences between men and women and would lead to an America where men wouldn’t be required to support their wives, anyone could walk into any bathroom, women could be drafted, and same-sex marriage would be legalized. Schlafly died in 2016 at the age of 92.

“Since the women are the ones who bear the babies, and there’s nothing we can do about that, our laws and customs then make it the financial obligation of the husband to provide the support,” Schlafly said in 1973. “It is his obligation and his sole obligation. And this is exactly and precisely what we will lose if the Equal Rights Amendment is passed.”

Nevada ratified the ERA last year. This week, Illinois did too.

The ERA sat at the 35-state ratification level for more than four decades until 2017, when Nevada lawmakers approved it, becoming the 36th. On Wednesday, Illinois became the 37th.

“We had an amazing amount of energy this year, more than any year that we’ve seen,” said Eden Nissani, outreach coordinator for Illinois state Rep. Lou Lang, who sponsored the resolution in the House.

Activists point to a number of factors contributing to the ERA’s 21st-century revival.

Roberta Madden, the co-president of the ERA-NC Alliance in North Carolina, pointed to the #MeToo movement as one explanation. “There’s been a lot more interest and a lot more attention in the news media about some of the wrongs against women and the inequalities that we face,” Madden, who has worked on the issue for 46 years, told me. “That’s focused the attention in a way that it hasn’t before.”

Nissan said she believes Equal Means Equal, a 2016 documentary about women’s inequality that makes the case for the ERA, contributed. The documentary’s director, Kamala Lopez, and Nevada state Sen. Pat Spearman, who championed the ERA’s ratification there, traveled to Illinois in May to push for the ERA. In Illinois, Nissan said some 50 organizations in Illinois worked together to pressure lawmakers across the state to ratify the resolution, and lawmakers who had resisted it in the past were persuaded.

“A lot of these Republican representatives couldn’t argue against it,” she said, adding that a number of Illinois Republican lawmakers are also retiring. “They didn’t have to be worried about precautions of what would happen in the next general assembly because they’re not going to be there.”

Of course, not everyone was on board. Rep. Peter Breen, also a Republican, told the Tribune the ERA was an “alleged constitutional amendment” that, if adopted, would be an “illegal act.” He propagated many of the beliefs that have dogged the ERA for years — namely, that it will expand abortions, which supporters of the ERA say is false.

Carol Robles-Roman, co-president of the ERA Coalition, a group that advocates for the passage and ratification of the ERA, said the issue of constitutional equality for women is one that has been “simmering for a while” and she hopes its latest momentum will stick. “The ERA has had momentum, and the #MeToo movement and Time’s Up, the messaging of both, really showed that we need an ERA,” she said. “People are realizing that women don’t have constitutional equality.”

Activists are looking to a number of candidates to become the 38th and final state to ratify the ERA. There are 13 possibilities: Alabama, Arizona, Arkansas, Florida, Georgia, Louisiana, Mississippi, Missouri, North Carolina, Oklahoma, South Carolina, Utah, and Virginia.

Robles-Roman pointed to Virginia, North Carolina, and Georgia, and Madden said Arizona and Florida were on her radar as well.

Virginia got close to ratifying the ERA earlier this year, but the GOP-controlled legislature ultimately rejected it. A House committee refused to take it up, and a Senate panel defeated it 9 to 5. Men cast all of the no votes.

Still, supporters there and across the country remain hopeful. “It’s been a long time coming,” Madden said. “Many of us have been working in the trenches on this for a long, long time.”

The ERA has missed its deadline. Supporters argue it could still get another chance.

A 38th state ratifying the ERA wouldn’t be the end of it. It’s 36 years past the deadline Congress set for it to become a constitutional amendment: Congress originally set a 1979 deadline, and when that date hit, the amendment only had 35 ratifications. Congress extended the deadline to 1982, but it missed that as well.

Still, there are some potential workarounds.

A 2013 report by the Congressional Research Service said Congress could just vote to change the previous deadline.

Rep. Jackie Speier (D-CA) and Sen. Ben Cardin (D-MD) have introduced legislation that would remove the ratification deadline for the ERA. “If Congress, by majority vote, said that the deadline was ’82, then Congress by majority vote could say that the deadline is many years from now,” Jane Mansbridge, a Harvard professor and the author of Why We Lost the ERA, said in a March interview with the Harvard Kennedy School PolicyCast.

Supporters of the ERA also point to the “Madison Amendment.” In 1789, James Madison first proposed that Congress shouldn’t be allowed to give itself a raise — any pay increases wouldn’t take effect until the next congressional term began. Six states had ratified the amendment by 1792. Then the effort stalled for 190 years. An undergraduate student, Gregory Watson, in 1982 figured out that the amendment could still be ratified and started what would eventually be a successful grassroots campaign to ratify, in 1992, the 27th Amendment.

Some Republicans at the state level supported the ERA in both Illinois and Nevada, and its supporters hope that many of the myths and misconceptions about it have dissipated. It was, at least initially, a bipartisan issue in the 1970s, and it could be again. “I think the issue of women’s equality is pretty bipartisan,” Robles-Román said.

And beyond what’s likely to pass, supporters of the ERA say it’s needed. “Even though we have some laws that have been passed to protect women, those laws can be struck down, watered down, not enforced,” Madden said, pointing to a Wisconsin equal pay law that was repealed by the state’s Republicans in 2012. “Until we get equal rights enshrined in the Constitution, we’re not going to be able to make headway.”

Supreme Court Justice Ruth Bader Ginsburg in 2014 remarks at the National Press Club said if she could choose any amendment to add to the US Constitution, it would be the Equal Rights Amendment. “I think we have achieved that through legislation, but legislation can be repealed, it can be altered,” Ginsburg continued. “So I would like my granddaughters, when they pick up the Constitution, to see that notion — that women and men are persons of equal stature — I’d like them to see that is a basic principle of our society.”