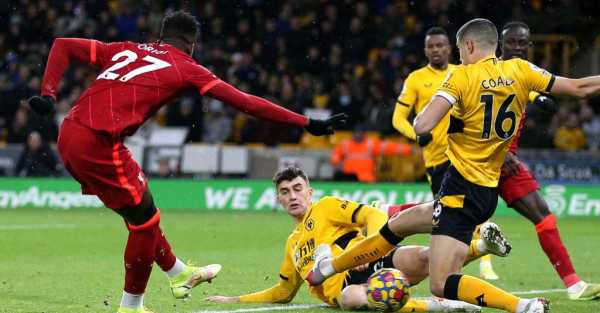 The forward’s injury-time strike snatched a 1-0 win at Molineux after the Reds dominated.

It briefly sent Liverpool top of the Premier League before Manchester City became the third team to lead the table on Saturday following their 3-1 win at Watford, Chelsea having started the day at the summit.

Origi, who has made just 34 league starts in seven years at Anfield, feels Jurgen Klopp’s men have the belief to remain in the hunt for the title.

He told the club’s official site: “I think that ties in with the values of the club – keep believing, keep going.

“In the end you can only control the moment you are in and just try to make the right play every time, even if you fail again and again.

“In the end, we are happy that we got the goal, even though it was a bit late. We enjoyed it. Winning games is all you work for.

“We try to work on the details during the week and we’re together the whole season to try to get wins.

“Getting that win, getting that goal is the best feeling and it keeps us also going with the momentum.”

Wolves looked like becoming the first team to stop Liverpool scoring since Real Madrid in April until Origi’s sucker punch in the fourth minute of stoppage time, when he collected Mo Salah’s cross to turn and score from six yards.

Conor Coady had earlier blocked Diogo Jota’s shot on the line – an awful miss from the former Wolves striker – as he nearly cashed in on Jose Sa’s mistake.

Wolves rarely threatened but their defensive display deserved more than late heartbreak, which cost them a spot in the top six.

“It’s the worst thing in football when you work hard to get the result and you concede a goal in the last minute of the game,” Ruben Neves told the club’s official site.

“We lost the ball in a transition but I thought we had done really well throughout all the game in transition. We went and lost it in the last minute.

“I think there was a little bit of disrespect to us before the game, with people saying Liverpool have got four goals already but we did well. They scored four goals in their last few games but we’ve not been conceding.

“We don’t get that much attention in the Premier League compared to the ‘big teams’ but I think we showed we’re not an easy team to beat. We will get to work again and go again next week at Manchester City.”