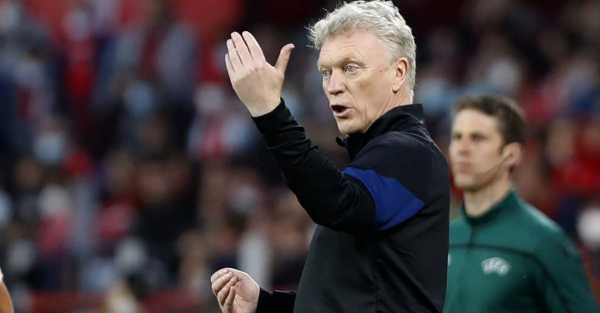 West Ham boss David Moyes has been impressed with how his side have dealt with combining the rigours of the Premier League with European football this season.

The Hammers continued their memorable Europa League journey on Thursday night when they drew 1-1 in their quarter-final first leg with Lyon despite playing with 10 men for most of the match.

This is the first time the Hammers have experienced the added workload, but they are still in the hunt for a top-six finish in the Premier League ahead of this weekend’s visit to Brentford.

Moyes said: “Thursday-Sunday football has always proved to be really difficult for us or any clubs in the Europa.

“I have to give great praise to the players for how they have coped with it for the majority of the season.

“We are still in European football, we’re in April now, it is great credit to the players, we want to stay there. But to be in Europe you have to do well in the Premier League, so we have to try and perform as best we can.

“It is always difficult to break into the top four in Premier League. If we can keep in and around the European positions it will be great.

“We had a great season last year, we have had our first season of having the European games and the Premier League games and we are having a good go of it. But we have to get ready for the game on Sunday.

“When you are getting into the knockout games you are liable to play all your main players to get a result and that is where it is likely to take its toll. But we are still in their fighting and we are still enjoying it.”

Aaron Cresswell will be able to play against the Bees despite his red card as his suspension does not apply to domestic matches, though Manuel Lanzini is still expected to miss out.

“We are still hoping that Lanzini can improve and be better,” Moyes added.

“He is still carrying a knock from the car crash unfortunately. He has been training but he is still a bit ginger in everything he is doing, but we are hoping that he is getting a bit closer to be able to play.”