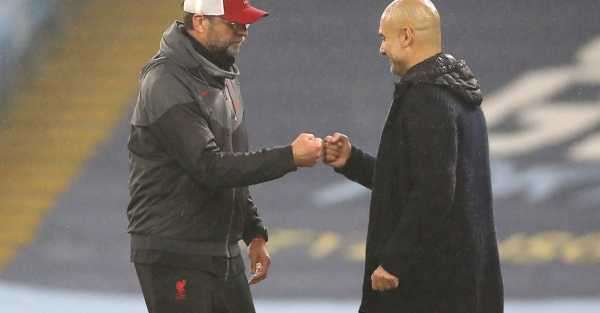 Liverpool manager Jurgen Klopp believes nothing in world football can prepare you for facing Manchester City but he feels the excellence of their Premier League rivals has helped his side become title contenders again.

Sunday sees the top two sides face off at the Etihad Stadium where a win would take Klopp’s team two points clear with seven matches to play.

The pair have been involved in some epic battles in recent seasons – in particular in 2018-19 when City pipped Liverpool to the title by a point despite a record points haul for the runners’ up.

While Klopp is not exactly overjoyed at the standards Pep Guardiola’s side have set he acknowledges it has made his players better, which contributed to them winning their first title for 30 years in 2019-20 with a 19-point advantage over City.

“I wouldn’t say I’m thankful that City is that good but it didn’t deny our development,” said the Reds boss.

“The last four years since we stepped up a little bit and could close the gap to City is interesting.

“We pushed each other to incredible points tallies. Madness. I would have never thought these kind of things were possible, especially not in this league.

“The consistency both teams showed in that period was absolutely crazy.”

Liverpool have won 10 successive Premier League matches and have one foot in the Champions League semi-finals after Tuesday’s 3-1 win against Benfica in Portugal but Klopp said that was of no help for this weekend.

“There is no game in world football you can compare to play against City because they are good in pretty much all areas. There are no real weaknesses.

“You have to show the respect they deserve, especially against City as they are pretty good with the ball.

“We know it is tough. What’s changed this last four years is everyone else thinks it is tough when they face us, and that’s really good.

“Nothing to worry about the mentality of my boys. After the (Benfica) game immediately the boys were clear ‘Now it’s City time’. We will be prepared.”

Sunday’s game is being billed as a title decider but Klopp insists the race will be far from over whatever the outcome.

”I can’t decide what people think. But if you go through the possible results: if we win we are two points ahead and if everyone thinks that’s done and dusted with the league then I cannot help,” he said.

“If we lose we are four points behind. And if anyone thinks ‘That’s it’ then I cannot change it but I know no-one from a City point of view would think like that.

“If we draw it’s one point behind and that’s it.

“It’s a very important game, one of the biggest challenges you can face in football and if we were 14 or 15 points behind, it would still be a great game.”