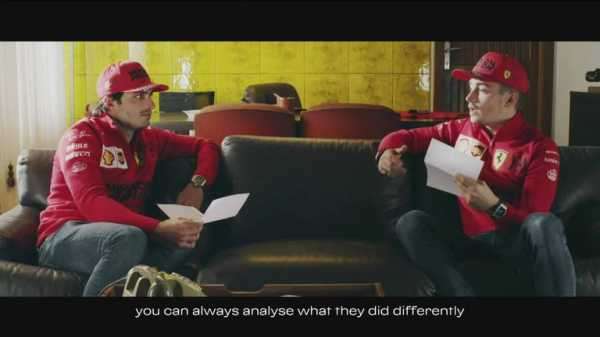 16:12 Watch the short film from Ferrari as the historic Italian marque launched their season with Charles Leclerc and new signing Carlos Sainz

Ferrari are aiming to work their way back towards the front in 2021 after falling to sixth last season – their worst result in four decades.

“But Carlos wants to beat me, I want to beat him too, and then once we are on track we will try and be careful whenever we fight each other and always trying to have a vision of what we can do better for the team.

“I think what’s most important is that we manage to do a separation of what’s happens on track and off track, and every time we are out of the car we need to work together to try and push the team forward for the development.

“I think it’s a fine line every team-mate needs to find. Carlos is very competitive, but as he has made clear, he is here for the development of the team – as I am – and we will have to play it smart on that one.”

Leclerc has beaten his team-mate in each of his three seasons in F1 while Sainz defeated Lando Norris in both his years at McLaren.

But team boss Mattia Binotto also made it clear that he is not interested in who is on top this year.

“Team comes first,” he said. “There’s not a single individual who counts more than the team. It’s something of which we are all aware.

“Something we have discussed altogether is that to be world champions, first we need to beat the other cars and the other drivers. Only by the time that eventually we are the fastest car, and we have the fastest drivers on track, we may fight between them. It’s really being focused in trying to progress as a team.”

How is Sainz settling in at Ferrari?

“My intention is obviously to be 100 per cent ready for race one, but realistically speaking, and my experience changing teams over all the years that that is very difficult to achieve,” he stated.

“My 100 per cent level, which is what I consider I was showing at McLaren race in race out, when I’m going to achieve that is very difficult to tell.

“My intention is as soon as possible and if that’s from race one then better. But that depends on the feeling the car gives you straight away, and I’m going to need a bit of time to find that out, and a bit of time to experiment.”

Ferrari are also “not expecting him to be fully integrated, 100 per cent at the start of the season”.

“I have to say that Carlos is very well integrated, I think his feedback has been good and his speed on track is good, and he’s developing day after day,” said Binotto. “But it will take some more time.

“But each single day will be important and I believe he will be ready for the start of the season, if not 100 per cent, very close.

“Because in the end he is not a rookie, he is a professional driver, he’s got some F1 seasons on his back so I am pretty sure he will manage pretty well the situation and be ready.”