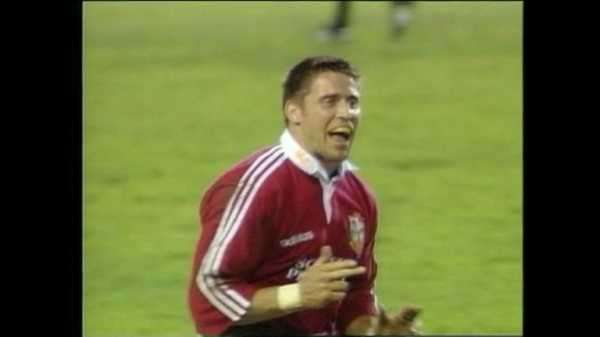 0:35 Watch Alan Tait’s try which put the seal on a first-Test win over South Africa for the British & Irish Lions in 1997.

His try in the closing seconds put the seal on a 25-16 victory over the Rugby World Cup holders in Cape Town, taking a pass from Neil Jenkins to finish an attack from the tourists six minutes after Matt Dawson’s try had put them ahead.

“I remember it was a great run by Gibbsy [Scott Gibbs] that got us that yardage, and then Tim Rodber, of all players, I’d never seen him offload before,” Tait told the Lions’ official website last year when recalling his try.

“He got that ball away because he knew what we’d practised for six weeks, keeping the ball alive. I was lucky enough to be on the end – Jenks’ ear will still be hurting now the way I was shouting for the pass.

“I put it down and just thought ‘we’ve won it’, you knew that was it, we’d won the Test. I looked towards the crowd and did my pistol gunfire thing – I don’t know where that came from.”

Only time will tell how much of an impact the Saracens contingent will have for Gatland’s men as they too attempt to conquer the reigning world champions in the coming months.

Watch every match from the British & Irish Lions’ tour to South Africa exclusively live on Sky Sports this summer.