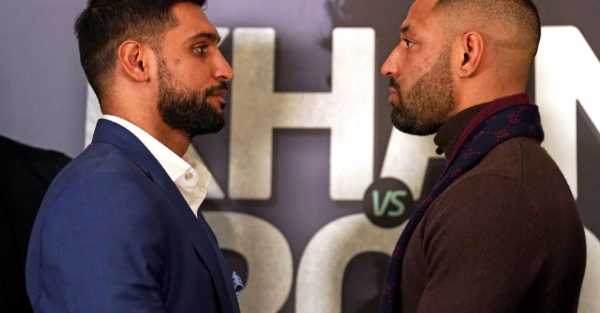 Amir Khan and Kell Brook will finally settle their career-long feud in Manchester on February 19th.

The former world champions admitted their grudge runs all the way back to their amateur days, with both men vowing to end their spat with a victory at the AO Arena early next year.

Khan and Brook bickered in a press conference in London on Monday where the two British fighters were unable to contain their disrespect.

Former IBF welterweight champion Brook accused Khan of ducking him for the majority of their careers.

“It’s 17 years this has been being talked about, even in the negotiations it’s been unbelievably hard work,” said Sheffield-born Brook, who has won 39 of his 42 professional bouts.

“I’m ecstatic the fans are finally going to see the fight they’ve wanted for years.

“Now we’ve got a date and that’s when Amir Khan hits the deck for the final time.

“It started from our original promoters back in the day.

“He’s never given me any respect, he’s never acknowledged me.

“He’s always run away, and when it’s come to this part of his career there’s nowhere else to run.

“So this is when he wants it. I’ve wanted this for many years.

“I’m coming for a car-park scrap: with accuracy and power I’ll take his chin clean off his head.”

Former WBA and IBF light-welterweight champ Khan has not fought since July 2019, but remains confident he still boasts the credentials for victory as he seeks to improve a record of 34 wins from 39 fights.

“I respect him as a fighter but I’ve never been scared of any fighter,” said the 34-year-old Bolton fighter.

“I’ve never run from Kell. At times in the past I didn’t think he deserved the fight.

“But now I’m going to smash him in the face and put him in his place.

“Now we get to see who can back those words up.

“I’m coming levels down for this fight.

“I’ve fought the best in the world, conquered America.

“I’m giving the fans what they want, people want to see me punch him in the face and put him in his place.”

Neutrals will be forgiven for considering this a match-up that has come many years too late, with Brook already 35 and Khan reaching the same age next week.

“Khan and Brook are icons of the sport in Britain and this will be an iconic encounter,” he said.

“Their rivalry has simmered for years, they are still by far the best welterweights in the country and the eyes of the world will be on them when they square off in February to finally settle the question about which of them is the better man.

“This is a fight every boxing fan has wanted to see for years. It’s the biggest fight in British boxing right now outside of Anthony Joshua versus Tyson Fury and we’re delighted to be able to deliver this legacy-defining clash live and exclusively on Sky Sports Box Office.”