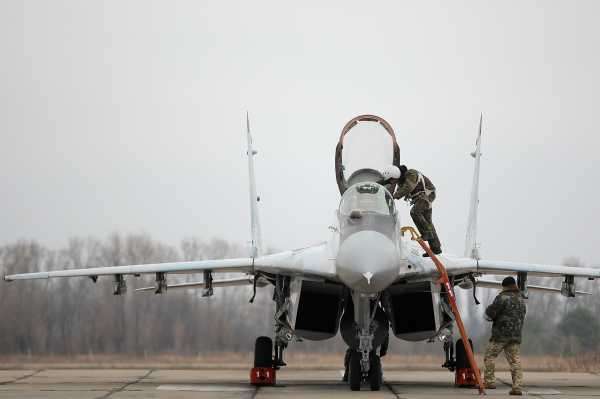 The Pentagon this week rejected a proposal from Poland to provide the Ukrainian Air Force with MiG-29 fighter jets, which Defense Department spokesperson John Kirby described as not “tenable” because of the risk of open conflict between NATO and Russia.

The deal, had it gone through, would have seen Poland transfer 28 MiG jets to Ukraine via the United States, while the US would have sent replacement F-16s to replenish the Polish Air Force. However, Biden administration concerns about escalating US involvement in the conflict appear to have stalled the deal.

Although Ukraine’s air defenses have held surprisingly well over the past two and a half weeks, particularly given the size and capabilities of the Russian Air Force, the Ukrainian government has requested additional fighter jets as Russian forces pummel cities like Mariupol, Kharkiv, and Kyiv with aerial bombardments in addition to shelling attacks. Ukrainian pilots are trained to fly the Soviet-made MiG-29s, some of which are already in service in Ukraine, so Poland’s offer theoretically could have had an immediate impact for Ukraine.

But the proposal isn’t as simple as it seems and apparently caught US diplomats off guard when Poland announced the plan Tuesday. Previously, US Secretary of State Antony Blinken had indicated that Poland sending jets to Ukraine would get “the green light” from the Biden administration, and Linda Thomas-Greenfield, the US ambassador to NATO, also supported the plan in an appearance on ABC’s This Week last Sunday.

“We have been in close consultations with the Polish government as well as with our other NATO allies on this issue,” Thomas-Greenfield said at the time. “We have not in any way opposed the Polish government providing these jets to Ukraine, and we’re working, as you noted, to see how we can backfill for them.”

The proposal Poland floated on Tuesday, however, would have involved the US more directly than the plan initially backed by Blinken and Thomas-Greenfield. Poland’s updated plan would have sent the MiG-29s to Ukraine via the US’s Ramstein Air Base in Germany, which also houses NATO’s Allied Air Command headquarters. Such a move could have more directly linked both parties to Ukraine’s war effort.

That added level of risk appears to have ultimately sunk the deal, though as Politico’s Alexander Ward and Joseph Gedeon point out, Poland could still unilaterally deliver the jets if it wishes to do so.

Even then, though, there are questions about the impact of such a transfer. US and NATO officials have said that 28 additional jets might not prove materially significant in the current context, where Russia has more modern aircraft, and Ivo Daalder, the former US ambassador to NATO, told Vox on Sunday that there could be technical issues as well.

“I think if we can provide fighter jets to Ukraine and the Ukrainians can use them, that is a good idea,” he said, but it’s unclear “how much modifications have been made to the Polish MiGs and whether, therefore, the Ukrainian pilots can actually fly them.”

In a Thursday press conference alongside US Vice President Kamala Harris, Polish President Andrzej Duda said that his country wanted to look out for its own security, support Ukraine, and be a responsible member of NATO.

“We wanted NATO as a whole to make a common decision so that Poland remains a credible member of NATO,” Duda said, “not a country who decides on its own on important issues which impact the security of NATO as a whole.”

Prior negotiations between the US and Poland about getting the jets to Ukraine had hit roadblocks, according to reporting by Ward and Politico’s Paul McLeary, because of the not-insignificant risk of the jets “departing from a US/NATO base in Germany to fly into airspace that is contested with Russia over Ukraine,” according to Pentagon spokesperson John Kirby, which “raises serious concerns for the entire NATO alliance.”

According to Daalder, it’s that part of the plan — moving the jets into Ukraine — that poses the biggest problem, more than the jets themselves.

“My sense is, I don’t see a big difference between Javelins and Stingers and air defense systems, and sending MiGs,” he told Vox. “I don’t buy the notion that [sending fighter jets] is escalatory. [Putin] believes anything we do is escalatory.”

Still, he agrees with Kirby that the transfer poses difficulties. “I think it’s less a political, than it is an operational, technical question of how you would do this” without escalating the conflict further, Daalder said.

The US and Europe have poured a massive amount of military aid into Ukraine since Russia invaded in late February, but confusion over Poland’s jet transfer plan underscores the careful line Western countries are walking to avoid escalating the conflict.

Specifically, a jet transfer to Ukraine would be much riskier than supplying more ground weapons of the type the US and other NATO countries have already provided, Olga Oliker, the program director for Europe and Central Asia at the International Crisis Group, told Vox.

According to Oliker, it’s a “question of direct involvement in the conflict by NATO member states,” more than one of provocation. “Providing weapons to the border, which the Ukrainians pick up and deliver, seems hard to interpret as direct involvement. With aircraft, which can involve training, maintenance, and also the logistics of who flies them from where and when, there are a lot of ways for things to go wrong.”

The Biden administration has also turned down Ukrainian requests for other types of assistance, including the imposition of a no-fly zone over Ukraine. Not only would maintaining a no-fly zone require enormous resources, but it would be a major escalation: As Vox’s Zack Beauchamp explained Thursday, even a limited no-fly zone would likely escalate the conflict between Russia and Ukraine to a shooting war between Russia and NATO.

“We all want to help the Ukrainians, but that doesn’t mean that everything that people come up with is doable,” Daalder said.

In the meantime, more familiar forms of military aid are still flowing to Ukraine from NATO countries, and have been for months — drones from Turkey, Javelin anti-tank missiles and Stinger surface-to-air missiles from the US and Europe, and a variety of other weapons systems from NATO member states have already been used to great effect.

Beyond concerns of escalation regarding other types of assistance — like fighter jets — US officials say they believe the continuing flow of weapons is the best way to back Ukraine in its fight against Russia.

“We believe the most effective way to support the Ukrainian military in their fight against Russia is to provide increased amounts of antitank weapons and air defense systems, which is ongoing with the international community,” Air Force Gen. Tod Wolters, NATO Supreme Allied Commander Europe and chief of US European Command, told the Washington Post. “The Ukrainians are making excellent use of these weapons now.”

Oliker echoed that sentiment to Vox: “Counterintuitive as this may seem, it’s very likely those smaller things that Ukraine needs more, although they’re less exciting for photo ops and such,” she said. “Ukraine has a whole lot more people under arms right now than it does under normal circumstances, and they all need to be supplied.”

The US and its allies in Europe have also leveraged an unprecedented array of economic sanctions on Russia and its oligarch class — an effort which the Kremlin has described as “economic war.”

According to the Post, there are currently plans in the works to provide additional lethal weapons systems to Ukraine, as well as badly needed humanitarian aid and fuel. Some US politicians, though, are pushing the Biden administration to do more, like work with NATO partners to provide S-300 long-range surface-to-air missile systems and radar systems that detect the location of incoming enemy fire.

“At a minimum, once the Russians know you have that, they won’t be able to just sit there and lob round after round after round,” Rep. Michael Waltz (R-FL), who has served in US Special Forces, told the Post. “It degrades their ability to just sit there and pummel you. They have to move, obviously, because now you have the ability to counter-battery.”

As the Ukrainians continue to hold out against the Russian invasion, Ukraine will likely require more assistance from NATO countries; as Oliker told Vox, though, deciding how and what to provide will continue to be fraught.

“Fundamentally, both Russia and NATO are trying to scare each other with the risk of escalation of war with the other, if certain lines are crossed,” Oliker said. “Neither wants that war, but both are willing to have it under certain conditions. It makes for a rather complicated dance.”