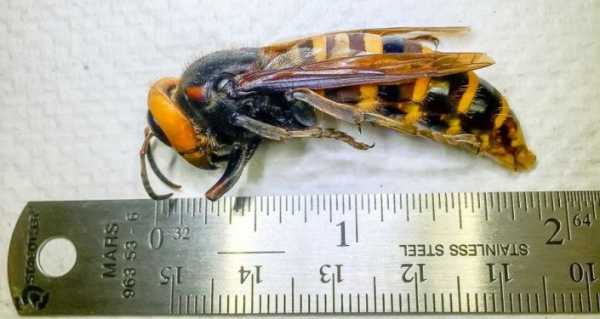 The insect is the world’s largest hornet, with the queens reaching 5 centimetres in length. Scientists in the US state of Washington previously set 1,400 traps in order to catch the dangerous insect, but only managed to capture one hornet.

Residents of the US city of Blaine, Washington may have thought that NASA astronauts are conducting some bizarre experiment or that extraterrestrial civilisations have overcome their shyness and decided to make contact with earthlings, but in fact these were US entomologists trying to save bees and humans from murder hornets.

According to the Washington State Department of Agriculture, scientists discovered the first nest of the species after they managed to trace their movement. Entomologists first lured the insects with strawberry jam. While the vicious hornets were enjoying the treat, scientists used dental floss to attach tracking devices to their bodies. Then entomologists traced the hornets back to their nest and started preparing to remove it from a tree cavity.

​Scientists had to dress in thick gear, which bears an uncanny resemblance to space suits, to protect themselves from the hornets’ 6-millimetre-long stingers. They sealed the tree cavity with foam and covered it with plastic wrap and then inserted a tube and vacuumed the insects from the nest.

Entomologist Sven-Erik Spichiger said the scientists do not plan to spare the murder hornets. “We will kill them”, he said.

The scientists then plan to cut down the tree in order to extract and eradicate the insects’ larvae and ideally find the queen, if it hadn’t already fled.

The Asian giant hornet, commonly known as a murder hornet, is normally found in Asian countries, but the insects suddenly appeared in North America last year. Scientists are still struggling to answer how or when they got there. They do not typically attack people, but as many as 50 people die from their stings every year in Asia. However, the hornets’ favourite prey are honeybees, whose population has been in decline across the world, but especially in the United States. According to the University of Maryland, 40 percent of US honeybee colonies died between October 2018 and April 2019. Murder hornets can destroy a whole bee hive in a matter of hours and feed bees’ bodies to their larvae.