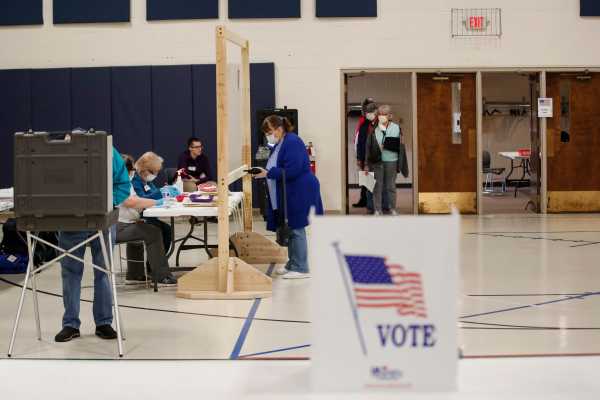 Polls opened at 7 am in Wisconsin despite the ongoing coronavirus pandemic, despite the Democratic governor’s attempts to delay the election because of said epidemic, and despite calls from public-health experts to stay home.

The result by mid-morning was what critics feared: Voters were queued up in long lines, waiting for hours to vote in crowded and understaffed polling stations.

Experts fear the prolonged public gatherings could undermine efforts to control the spread of the coronavirus.

Take this line of scores of voters waiting at one city’s singular polling location, which a journalist with the local ABC affiliate tweeted:

The state has been under a shelter-in-place order since March 25, but Republican officials in the state fought to ensure the election would proceed as originally scheduled, and the state’s and nation’s highest courts ruled in their favor on key logistical outlets.

The highest-profile race at stake Tuesday is the Democratic presidential primary, which Joe Biden is expected to win, according to recent polls. But given the state of the Democratic primary, the state Supreme Court seat also on the line today could be far more consequential. (There are also several other key state and local elections on the ballot today.)

As of Monday afternoon, there have been 2,440 confirmed cases of Covid-19, the disease caused by the novel coronavirus, in the state, along with 77 deaths, according to the Wisconsin Department of Health Services.

Here’s what we know about the chaos seen in Wisconsin and what it could mean for the November general election throughout the country.

Why this is happening

Simply put, there aren’t enough election workers to run a free and fair election in Wisconsin on Tuesday.

Poll workers in the state have refused to staff the polls for fear of catching the virus. As a result, while the city of Milwaukee usually has 180 polling locations for a given election, there’s now only enough staff for five. More than 100 municipalities reported that they didn’t have enough poll workers to open a single polling place. In response, Democratic Gov. Tony Evers called in the National Guard in order to work the polls.

While other states simply delayed their elections, Wisconsin was initially reluctant to do so because of the general elections for the state and local offices. When Evers did begin attempting to delay the election, the state’s Republican-controlled legislature declined to take any action to move Election Day. As recounted by Vox’s Ian Millhiser:

That set off a series of legal challenges that all broke along party lines and culminated in a Monday US Supreme Court decision with the court’s five conservatives deciding that absentee ballots must be postmarked by Election Day. (That overturns a previous court’s ruling that allowed ballots to be postmarked later, as long as they arrived by April 13.)

The actions in Wisconsin could potentially have repercussions in this fall’s general election, Millhiser explained:

Voters, for their part, have tried to make do with voting in a safe manner. As of last Wednesday, 1,053,556 absentee ballots had been requested from the state. However, it’s unclear how many of those absentee ballots will end up counting, after the Supreme Court decision.

The legal maneuvering and the pandemic’s inherent risk have created a perfect storm to produce long — and life-threatening — lines for voting.