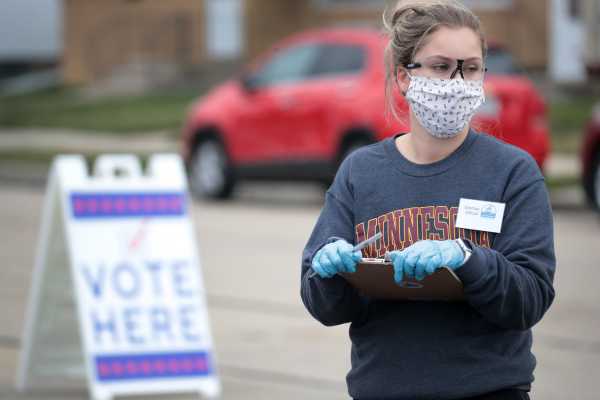 The Wisconsin election is moving forward despite fears about the coronavirus and days of wrangling over whether to postpone voting until the summer, as multiple other states have done. The results won’t come quite so speedily.

It’s Joe Biden versus Bernie Sanders on the Democratic presidential primary ballot. Heading into Tuesday’s election, Biden held a firm lead over Sanders, according to FiveThirtyEight’s average of polls, which had the former vice president at 53 percent support and the Vermont senator at 36 percent support.

But the more closely watched contest is one that could have a much larger effect on the state’s politics: A Wisconsin Supreme Court seat is also on the ballot, and the decision to hold the election Tuesday — which the US Supreme Court weighed in on — could affect whether the GOP holds on to that seat.

To back up a bit as to how we got here, initially, both Republican and Democratic leaders supported keeping Wisconsin’s primary as originally scheduled, despite concerns from public health officials that in-person voting could put voters at risk. There are local contests on the ballot, including the state Supreme Court one, and there was bipartisan support for avoiding delays on deciding those.

As the outbreak intensified, Democratic Gov. Tony Evers tried to delay the primary but met heavy resistance from the state’s Republican-controlled legislature. There have been more than 2,000 confirmed coronavirus cases in the state and more than 70 deaths as of April 6.

Evers issued an order postponing in-person primary voting until June and proposed automatically mailing ballots to every voter in the state. After last-second wrangling in the legislature and the courts, Evers lost. On Monday, the state’s Supreme Court ruled on a party-line vote that Wisconsin’s primary had to take place on Tuesday. The same day, the US Supreme Court ruled against an extension of absentee voting in April that would have extended the deadline for them to be counted as long as they arrived at a polling place by April 13. In order for ballots to be counted, they’ll have to be postmarked on Election Day, April 7, and received by the 13th. There are concerns that this will disenfranchise voters, perhaps especially Democrats.

Sanders called the decision to go ahead with in-person voting on Tuesday “dangerous” and said his campaign wouldn’t engage in traditional get-out-the-vote activities. A spokesperson for the Biden campaign told Vox that its get-out-the-vote work in the state has been only absentee-related for weeks. The state’s Democratic Party has released information for voters to take part in curbside voting and drop off absentee ballots. Already, polling places are seeing long lines in many parts of the state. And in Milwaukee, for example, the number of voting locations was cut from 180 locations to five.

The polls close at 8 pm Central time, and Vox will have live results courtesy of our partners at Decision Desk. But don’t expect results — let alone a call for any candidate — anytime soon. The state election counsel told clerks not to report results until April 13, which will allow precincts time to receive mail-in ballots (that must be postmarked by April 7).

Biden, who’s leading in the national delegate count, heads into Tuesday well-poised to win the majority of Wisconsin’s 84 pledged delegates. A victory for the former vice president would be a blow to Sanders, who won the state’s primary in 2016.

We’ll have live results once clerks begin reporting them:

Beyond the presidential primary, another race to watch is for a Wisconsin Supreme Court seat between incumbent conservative Justice Daniel Kelly and his liberal challenger, Judge Jill Karofsky.

We’ll have live results once clerks begin reporting them: