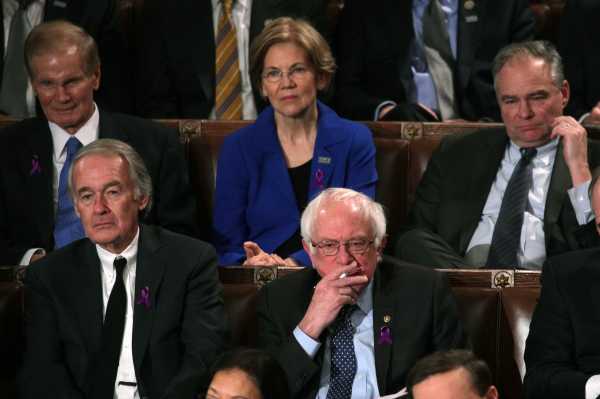 After President Donald Trump’s State of the Union address on Tuesday night, there wasn’t just one Democratic response. There were five.

The party’s official response came from 37-year-old Rep. Joe Kennedy III (D-MA), who delivered a rousing speech at an auto-body shop in a Massachusetts technical school, sounding the alarm about America’s deepening divisions under Trump.

“It would be easy to dismiss the past year as chaos. Partisanship. Politics. But it’s far bigger than that,” Kennedy said. “This administration isn’t just targeting the laws that protect us — they are targeting the very idea that we are all worthy of protection. For them, dignity isn’t something you’re born with but something you measure.”

Kennedy’s speech was broadcast on major networks, but on social media, other progressive figureheads were offering up their own vision of the Democratic Party.

The State of the Union response is meant to elevate rising stars in each party, and Kennedy’s national star certainly rose on Tuesday as Democratic pundits talked about him as a bright spot in the party’s future. His speech certainly stood out in a crowded field, but it’s clear that whatever the future of the Democratic Party holds, there are many diverse voices shaping it.

In addition to Kennedy, the official Spanish-language response was delivered by Virginia Del. Elizabeth Guzman. There were also responses from Sen. Bernie Sanders (I-VT), a speech by Rep. Maxine Waters (D-CA) set to broadcast on BET Wednesday night, and a speech from former Congress member Donna Edwards of Maryland on behalf of the progressive Working Families Party.

On the one hand, this could be seen as evidence of a divided party struggling to unify, with multiple factions feeling that the official Democratic response doesn’t speak for them. On the other hand, the Democrats have always been a party made up of many different coalitions, and the fact that there are so many responses signals energy in the party’s base headed into crucial 2018 midterms.

Kennedy clung to the latter interpretation during a CNN interview Wednesday morning, saying the five speeches showed a healthy diversity of opinions in a “big-tent party.”

“I think it’s great,” he told CNN’s Alisyn Camerota on Wednesday morning. “What our party needs at the moment is an awful lot of voices out there. We’re a big tent party, it’s a broad, diverse country.”

Kennedy said he remained optimistic that any signs of discord among the Democratic party will dissipate as the midterm elections draw closer. And while Democrats are certainly searching for a nominee to run against Trump in the 2020 presidential election, their lack of unity doesn’t necessarily disadvantage them in the 2018 midterms, where they must compete in a large and diverse group of states in order to reclaim majorities in the House and Senate.

“It’s still early in the electoral process, I expect that we’ll unify as we get tighter to those midterm elections, and then certainly as we go toward 2020,” Kennedy said on CNN. “But the most important thing that Democrats need to do — and I think it’s better for our country — you have people putting forth those narratives and seeing whether those messages resonate.”

The response speeches offered different flavors of the Democratic Party

One thing that was clear from the numerous responses on Tuesday night is that Democrats are certainly unified in their opposition to Trump. But once you get to what their own vision is for the party, things get a bit more muddled.

Kennedy’s speech was a clear harkening back to the days of President Barack Obama, touching on themes of unification, especially after the past year of divisive identity politics stoked by Trump’s own rhetoric.

“Their record is a rebuke to our highest American ideal, the belief that we are all worthy, that we are all equal, that we all count in the eyes of our law and our leaders, our god, and our government,” Kennedy said in his speech. “That is the American promise.”

Progressive icon Bernie Sanders began his own State of the Union response as Kennedy finished, which was live-streamed on YouTube, Facebook, and Twitter. As of this morning, Sanders’ staff estimated 1 million people watched the address.

This is the second year in a row that Sanders has sidestepped the official Democratic response and delivered his own State of the Union rebuttal. In his typical style, Sanders went deep into policy and picked apart Trump’s self-congratulatory speech, issue by issue.

He hammered home his own points about inequality for the poor and middle class, two groups Trump promised to lift up during his campaign for president.

Though Sanders and Trump ran for president on vastly different policy platforms in 2016, the two candidates shared a few talking points: reducing prescription drugs costs, getting the United States out of large trade deals like the Trans-Pacific Partnership, and introducing “insurance for everybody” (though Sanders has an actual plan on how to do this).

Despite increased speculation about Sanders’s own 2020 aspirations, and recent reports that he is starting to more seriously mull a run, the Vermont senator is publicly remaining quiet on a potential bid. Instead, Sanders says he’s focused on the 2018 midterms and getting a new generation of progressive candidates elected to office.

“We are seeing the growth of grassroots organizations and people from every conceivable background starting to run for office — for school board, city council, state legislature, the U.S. House and the U.S. Senate,” Sanders said near the end of his response speech. “In fact, we are starting to see the beginning of a political revolution, something long overdue.”

The next big electoral contest for Democrats is the 2018 midterms in November, where the party is angling to take back seats in the House and Senate, as well as trying to turn governors mansions and state legislatures blue.

The midterms are less about a cohesive national message and more about trying to run viable candidates in dozens of diverse districts across the country. And Trump is proving to be a great motivator for Democrats on all level of the party apparatus, evidenced by the party’s numerous special election wins in 2017.

“I definitely think it’s a reaction to Trump,” said election analyst and writer Nathaniel Rakich, who writes for FiveThirtyEight and Inside Elections. “I think progressives are waking up and realizing that in order to defeat this far-right strain … that they need to seriously organize on all levels.”

The special elections in 2017 showed that Democrats could pull out unexpected wins, everywhere from the city council of St. Paul, Minnesota to the special election for US Senate in Alabama, one of the deepest red states in the country. Democrats are trying to reclaim the disenchanted Rust Belt workers and Blue Dog Democrats who voted for Trump in 2016 while also appealing to black people, Hispanics, and a new generation of millennial voters.

So far, raw grassroots energy is on their side. The sheer number of Democrats lining up to challenge Republicans in the House is staggering; there were already 391 Democratic candidates entering House races who had raised at least $5,000 this fall.

The age of Trump has energized Democrats across the country, as progressive groups focus on winning races in regions that had been deemed out of reach electorally. The Democratic Congressional Committee is actively partnering activist group Indivisible and other local grassroots organizations in individual states.

And while congressional special elections get the most headlines, progressive groups are also turning their focus to state and local elections.

Until Democrats put forth candidates for 2020, they don’t need to worry so much about settling on a central party figure. At least in 2018, Trump may be the biggest unifier that they have.