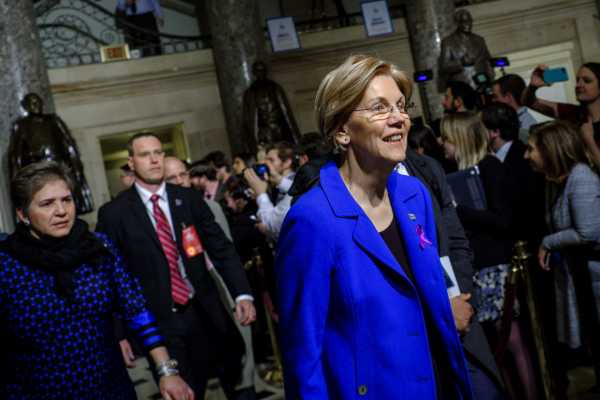 A group of Democratic senators, led by Elizabeth Warren (D-MA) and Patty Murray (D-WA), are asking the Government Accountability Office to investigate the Trump administration’s response to the opioid epidemic.

In a letter obtained exclusively by Vox, the senators asked the GAO to look into what President Donald Trump and his administration have done after declaring a public health emergency over the opioid crisis in October.

“We are writing to request that the U.S. Government Accountability Office (GAO) conduct a review of the actions that the Trump administration has taken to ‘reduce the number of deaths and minimize the devastation the drug demand and opioid crisis inflicts upon American communities’ since the October 26, 2017 declaration that the opioid crisis is a public health emergency,” the senators wrote.

Trump had promised that his administration’s emergency declaration would help mobilize more resources to address the opioid crisis.

The senators acknowledge that “[t]he declaration of a public health emergency is a potentially important step towards combatting the opioid crisis.” But they question whether the declaration has been properly deployed and leveraged: “Given the severity of the crisis, we have grown increasingly concerned by reports that the President has done little to make use of his public health emergency declaration, leaving state and local communities without the resources they need to fight the opioid epidemic.”

The senators ask the GAO to look into the tools the administration has available through the public health emergency, which tools have been used, and how the administration has justified its use of an emergency declaration. The GAO regularly reviews a variety of government functions not just for waste but also for effectiveness (including, for example, flu preparedness and other opioid policies), and those reviews can help guide or reset subsequent policymaking.

Experts and advocates have been critical of the Trump administration’s handling of the opioid crisis, calling for the White House to do much more.

Chuck Ingoglia, a senior vice president at the National Council for Behavioral Health, which advocates on addiction issues, previously summarized the consensus: “A lot of talk, little action. It’s great that the president says this is a priority. It’s great that he convened a task force so we have another paper that says the opioid crisis in America needs attention. But too little has happened to actually do anything about it.”

In 2016, the latest year with a full official count, there were nearly 64,000 drug overdose deaths in the US — an all-time high. The rise in drug overdose deaths was a big reason that life expectancy fell for the second year in a row in the US, which had not happened since the early 1960s.

If the worst trends continue, STAT forecasts that as many as 650,000 people will die within the next decade — the equivalent of the entire population of Baltimore.

This is the reality facing Trump, the reality in which his administration has responded with next to nothing. And now Democratic senators want answers.

Trump has been all talk, no action

Here are the most significant steps that Trump and his administration have taken on the opioid epidemic since he took office:

That’s it. No major new funding, nor a push for more funding. No big new strategy. To the extent any money was allocated, it was largely from policies that preceded Trump — such as the Cures Act, which passed in 2016 with then-President Barack Obama’s approval and allocated $1 billion over two years to the opioid crisis.

“He’s done nothing,” Keith Humphreys, a drug policy expert at Stanford University, said earlier this month, referring to federal funding in particular. “He did appoint a commission. I think those people did a pretty good job. They were smart, they listened, they came up with a lot of good ideas. And they’ve been ignored entirely.”

The most notable actual policy change is the INTERDICT Act. This law’s effect, however, will likely be greatly limited. The federal government has for decades tried to intercept illicit drugs before they come into the US, but drugs have consistently gotten through in huge numbers anyway. Along these lines, experts are deeply skeptical that any effort to beef up border security, including Trump’s wall, would do much, if anything, to stop the flow of drugs into the US.

Meanwhile, Trump hasn’t appointed anyone to lead the Office of National Drug Control Policy, and the office is mired by staffing problems — including the hiring of a deputy chief of staff who apparently lied in parts of his résumé. The drug czar’s office, as it’s known colloquially, is crucial to coordinating federal efforts on drugs, according to experts.

Trump also has not nominated anyone to head the DEA, which is tasked with enforcing the nation’s drug laws.

In his proposals, Trump has also tried to cut the budget for the Office of National Drug Control Policy by 95 percent — a move that his team initially walked back after facing bipartisan opposition during last year’s budget talks but reportedly may try again this year.

His budget plan also proposed keeping spending for addiction treatment relatively flat, while cutting prevention funding. The administration has also been silent on proposals in Congress to increase funding to the opioid epidemic, including Democratic bills to add tens of billions of dollars in spending over the next few years to deal with the crisis.

And the administration supported the repeal of the Affordable Care Act, which experts credit with expanding access to addiction treatment.

All of this adds up to the sentiment I heard again and again: “It’s remarkable how little we’ve seen,” Andrew Kolodny, an opioid policy expert at Brandeis University, previously told me. “There really has been next to no action by the Trump administration other than public statements.”

The Trump administration’s actions so far, particularly through its establishment of a commission to study the issue, suggest that the opioid epidemic’s solutions are some sort of big mystery.

The reality, experts say, is that while there is no one silver bullet, we have a lot of good ideas about how to deal with the crisis.

One of the big problems is a lack of access to addiction treatment: According to a 2016 report by the surgeon general, only about 10 percent of people with a substance use disorder get specialized treatment. The report attributed the gap, in part, to a lack of supply of treatment — an issue that simply requires more money to deal with.

“I don’t think we don’t know what to do. We do know what to do,” Regina LaBelle, who served in Obama’s Office of National Drug Control Policy, previously told me. “We need money and the strategy and … political leadership and courage.”

As I previously explained, experts generally agree on what more federal resources should go to: They could be used to boost access to treatment (particularly highly effective medications for opioid addiction), pull back lax access to opioid painkillers while keeping them accessible to patients who truly need them, and adopt harm reduction policies that mitigate the damage caused by opioids and other drugs.

Advocates and experts argue about whether the extra resources should come through Medicaid, block grants for mental health and addiction care, or some other source. The consensus, though, is that much more federal support is needed — in the tens of billions of dollars over the next few years.

“I was just in West Virginia this week. These counties are really devastated,” LaBelle said earlier in January. “I know that’s been covered a lot. But it’s really something when you talk to a county official and you see how little money they have to put toward the epidemic.”

Some states are attempting to seriously confront this crisis. Vermont, for example, has built a “hub and spoke” system that treats addiction as a public health issue and integrates treatment into the rest of health care. The state was the only one in New England to have an overdose death rate that wasn’t significantly above the national average in 2016. (For more, check out my in-depth breakdown of Vermont’s system.)

But Vermont managed to build this new system in large part with federal dollars, particularly through Obamacare’s insurance expansion and a special Medicaid waiver that states can obtain through the health care law. It’s that kind of federal support that budget-strained states will need to deal with the opioid crisis.

These are the kinds of considerations and ideas that experts say can help the country move toward ending the opioid epidemic.

But even after it declared a public health emergency, the Trump administration has done little to lift up those kinds of ideas.