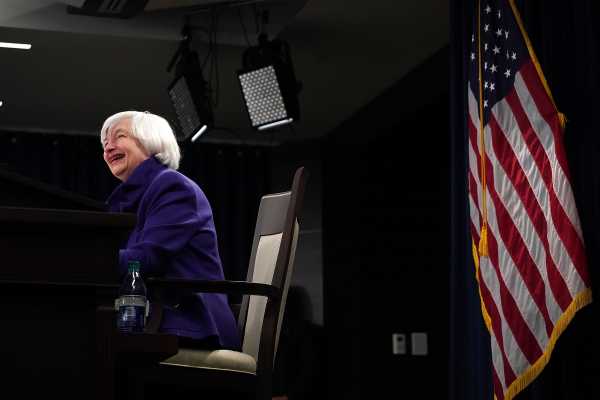 President Donald Trump spent much of his State of the Union address bragging about the United States economy and the stock market. He should really be thanking Federal Reserve Chair Janet Yellen. Instead, he’s replacing her.

“Since the election, we have created 2.4 million jobs,” Trump said during his first State of the Union address on Tuesday. “Unemployment claims have hit a 45-year low.”

He boasted that the stock market “has smashed one record after another,” boosting Americans’ 401(k) plans, retirement accounts, pensions, and college savings accounts “through the roof.”

He introduced a pair of small-business owners who “just finished their best year in their 20-year history,” as well as one of their employees, who lost his job during the recession and has since gotten back into the workforce.

Trump is not wrong that the economy is doing pretty well right now — the unemployment rate is 4.1 percent, GDP growth is strong, and the stock market is, indeed, on quite a tear, with the S&P 500 already up about 6 percent this year alone.

What he’s not right about is that he deserves all of the credit for it. Trump inherited an economy and a stock market that Yellen played a major role in helping shape and revive. It’s not unusual for presidents to take a victory lap on economic achievements that weren’t entirely theirs. But Trump’s victory lap on Tuesday night was particularly glaring because he also just refused to reappoint Yellen — the woman who arguably deserves the most credit for the Trump economy so far.

Yellen will exit the Federal Reserve on Saturday. She leaves behind a legacy of “near perfection.” She has overseen the biggest drop in unemployment of any Fed chair in modern history and the stock market’s continued rise. She helped steer the continued economic recovery and guided the return to pre-crisis policy — all items President Trump enjoys bragging about.

And yet in November, Trump broke with tradition and declined to reappoint Yellen, an Obama appointee, as Fed chair, despite her success in the position. He picked a still qualified, but less qualified, man instead: Jerome Powell.

“If we judge the Fed by its capacity and its performance in hitting the mandates or the objectives that Congress gives it — price stability, maximizing employment — the record of the economy under her chair has been just shy of stellar,” Sarah Binder, an expert on Congress at the Brookings Institution and George Washington University, recently told me.

A quick refresher on Yellen and the Fed

The Federal Reserve is the central bank of the United States. One of its main responsibilities is managing interest rates and influencing the availability and cost of credit in the American economy. It sets the “federal funds rate” — the interest rate banks charge one another for overnight loans — and can adjust the rate to sway the economy.

The bank has a “dual mandate,” a set of goals it is supposed to achieve: maximizing employment and stabilizing prices for goods and services. In practice, that means the Fed tries to keep the unemployment rate low and targets an inflation rate of 2 percent.

She arrived at the Fed at a moment when it was still trying to steer the US economy past the financial crisis. The central bank under Bernanke had dropped interest rates to 0 percent and implemented a tactic known as “quantitative easing,” an unconventional approach of buying government bonds and mortgage-related securities, in an effort to inject money into the economy and speed up the recovery.

Yellen oversaw the end of US quantitative easing in 2014.

In monetary policy terms, Yellen is considered to be dovish — meaning she prefers looser policies, such as low interest rates, that are meant to stimulate economic growth. (That’s opposed to hawks, who are more concerned about inflation and therefore inclined to increase interest rates.)

Powell, the next Fed chair, is thought to be dovish as well and is expected to continue many of Yellen’s policies. “On monetary policy, it’s hard to find a lot of daylight between them,” Binder said.

It should be #ThanksYellen on jobs

The Bureau of Labor Statistics will release its January jobs report on Friday. If the unemployment remains at 4.1 percent, where it was in December, Yellen will complete her term at the Fed with the lowest final rate of any Fed chair since 1970.

Sam Bell, a Fed watcher and research adviser at Fed Up, a campaign to encourage the Federal Reserve to keep interest rates low, in a series of tweets on Tuesday ahead of Trump’s State of the Union laid out the case for Yellen on jobs. “Sad truth: if you were among the millions of Americans laid off, turned down, never called back in ’09, ’10, 11 … many policymakers gave up on you. Didn’t think you could bounce back,” he wrote. “They thought unemployment would be permanently higher. Not Yellen. She kept the faith. Year in and year out from then until now she kept telling her colleagues — we can do better! More people can come back into the workforce!”

In April 2016, when unemployment was at 5 percent, she continued to insist the US could do better, and in September 2017 she said while the unemployment rate was “probably correct” in signaling the labor market had returned to pre-crisis levels, “that does not necessarily demonstrate that the economy is now at maximum employment.”

“Not only is Yellen a towering figure with deep institutional knowledge, her unique focus on the job market also helped the US economy do better than many predicted was possible,” wrote Pedro Nicolaci da Costa, a senior correspondent at Business Insider and former editorial fellow at the Peterson Institute for International Economics, on Wednesday.

The New York Federal Reserve is honoring Yellen’s tenure as chair — and as the first woman to hold the spot — with a nod to her “inimitable style,” namely, her affinity for popping her collar. On Twitter, the New York Fed encouraged women, particularly those in science, technology, engineering, and mathematics (STEM) fields, to share pictures of themselves turning up their collars just like she does. Plenty of women obliged.

Yellen on Wednesday is overseeing her final Federal Open Market Committee meeting, a gathering of monetary policymakers held about every six weeks. She will surely receive plenty of accolades from her colleagues, but one question will likely pervade: Why is she being asked to leave in the first place?