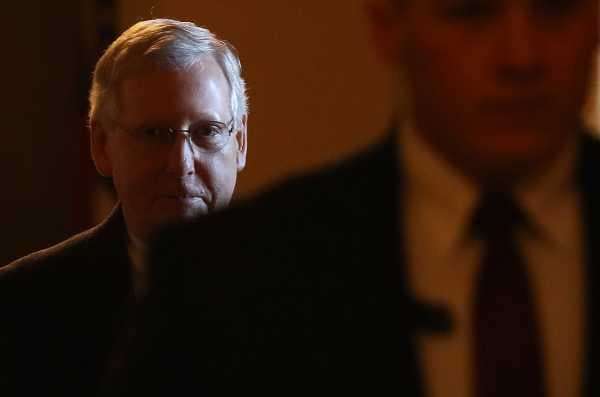 Senate Democrats agreed to reopen the federal government last month because they had reached an understanding with Senate Majority Leader Mitch McConnell on how to move forward with an immigration debate.

In the eyes of the activist base, that was the deal’s flaw: They believe that McConnell can’t be trusted, citing previous promises he made to individual Republican senators to help get the tax bill passed. But Senate Democrats who supported the deal believed they had McConnell boxed in, committed publicly to moving a bipartisan immigration bill through the Senate to address the Deferred Action for Childhood Arrivals program.

The McConnell pledge sets the contours for the ongoing negotiations, leading up to the next deadline, on February 8, when the government will once again need a spending bill to pass Congress. This is what the Republican leader, Washington’s most renowned tactician, actually promised:

The Republican leader used some classically ambiguous political language — “it would be my intention,” etc. — but Senate Democrats believe they have him boxed in. McConnell has so publicly committed, before the Senate and the nation, that he won’t be able to wriggle out of it, they said.

“I think he’s made his commitments so publicly, so unequivocally, it would be very difficult for him to try to find a way out of meeting that commitment,” Sen. Angus King (I-ME), who caucuses with the Democrats and voted to reopen the government, told me.

McConnell hopes that a bipartisan deal is reached before February 8

DACA, the Obama-era program that protected nearly 700,000 people brought to the United States as children and that Trump has said he would end in March, was at the center of the shutdown fight. Democrats, spooked by President Trump’s waffling on the matter after the “shithole” meeting, felt they had to shut down the government to force the issue. They got McConnell’s pledge for their troubles.

But there are a number of other issues, including disaster relief for Texas and Puerto Rico as well as long-term spending plans for the military, that Congress has also been working to resolve for the past six months or more.

McConnell laid out his pledge to the Senate, and Senate Democrats particularly, in a floor speech before the successful vote to reopen the federal government. He started by saying he hoped a bipartisan agreement on all of these issues could be reached before the short-term spending bill expires on February 8.

“I hope and intend that we can reach bipartisan solutions on issues such as military spending, immigration and border security, and disaster relief before the February 8 deadline,” he said.

But right now, hopes for a broader immigration deal are fading: Politico reported Monday Congress might simply punt with a short-term extension of legal protections for DACA recipients, rather than a permanent solution.

If Senate Democrats and Republicans were able to reach some agreement on immigration before February 8, that would be the end of the matter, likely removing the threat of another government shutdown.

But if an agreement is not reached, the next part of McConnell’s promise is key: He would bring an immigration bill to the Senate floor for debate after February 8 — so long as Democrats don’t shut down the government again.

“Should these issues not be resolved by the time the funding bill before us expires on February 8, so long as the government remains open,” the Republican leader said in his floor speech — repeating for emphasis “so long as the government remains open,” — “it would be my intention to take up legislation here in the Senate that would address DACA and border security, as well as other related issues.”

So McConnell’s condition for an immigration debate is that Democrats don’t oppose another short-term spending bill that the Senate will likely need to pass on February 8. So long as the federal government is funded, he’ll bring some kind of DACA bill to the floor; as for which one, he specifically referenced the ongoing negotiations between the No. 2 leaders in both parties and both chambers.

He also pledged to have a fair and open amendment process for whatever immigration bill is brought to the Senate floor.

“Let me be clear: This immigration debate will have a level playing field at the outset and an amendment process that is fair to all sides,” McConnell said.

Democrats believe they have McConnell committed to moving an immigration bill

McConnell’s promise is predicated on an immigration agreement not being reached before the February 8 deadline for a new spending bill — and on Democrats not shutting down the government again when the time for another extension comes.

Progressive activists are dubious, of course, as they railed against Senate Democrats’ decision to end the shutdown. McConnell originally pledged to Sen. Susan Collins (R-ME) that a pair of health care bills would be brought to the floor before the end of last year. There had also been assurances given to Sen. Jeff Flake that a bipartisan DACA bill would get a vote in January. Neither promise has been met yet, though the senators involved have signed off on the delays. The point is, the progressive base doesn’t see McConnell as a good-faith negotiator and slammed the Democratic deal with the GOP leaders for that reason.

Nobody seems sure, with February 8 just days away, what happens now. Even if Democrats vote to keep the government open with another short-term bill then, to meet McConnell’s condition, there would be at least one more funding vote later in February or in March that would theoretically give them leverage to force a fight over DACA.

It might not come to that. Even Democrats who opposed the agreement to end the shutdown thought McConnell would have a hard time getting out of his commitments.

“I understand people are worried he broke his word to a few of his members,” Sen. Chris Murphy (D-CT) told me. “But it is something different to make a promise on the floor of the Senate to dozens of members rather than one or two.”

But that was easy to say when February 8 was two weeks away. But now it’s here. Hang tight.