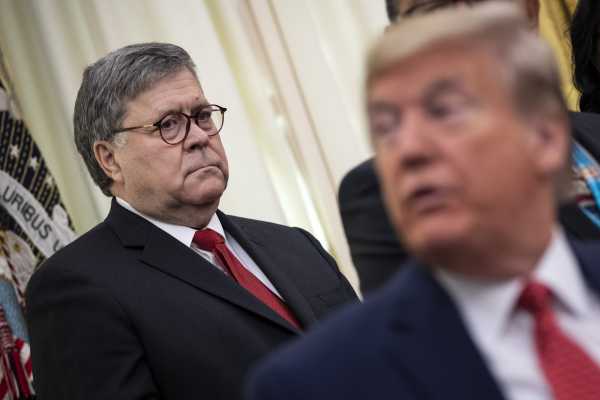 Last July, the Trump Justice Department made a triumphant announcement: The federal government would “resume capital punishment” after a “nearly two decade lapse.” The press release named the five men that the government hoped to execute, and described their unquestionably horrific crimes in detail.

This decision to resume federal executions — or, at least, a legal dispute over how four of these men may be executed — is now before the Supreme Court. The Trump administration wants the justices to bypass the judiciary’s ordinary procedures so that these men can be executed right away — effectively circumventing the careful consideration judges typically give to novel legal questions.

The timing of the initial announcement likely was not a coincidence. The federal government’s last execution was in 2003, in large part due to a still-pending lawsuit challenging the federal execution protocol, which temporarily prevented many federal inmates from being executed. A few months before the Justice Department’s announcement, however, the Supreme Court handed down Bucklew v. Precythe (2019), which makes it extraordinarily difficult for death row inmates to challenge their executions under the Eighth Amendment’s prohibition on cruel and unusual punishment.

The holding of Bucklew is that a death row inmate who claims that they are about to be executed using an unconstitutionally cruel and unusual method must identify an “alternative method of execution” that may be used instead. “The inmate’s proposal,” Justice Neil Gorsuch wrote for the Court, “must be sufficiently detailed to permit a finding that the State could carry it out ‘relatively easily and reasonably quickly.’”

And yet, even with Bucklew on the books as a binding precedent, the Trump Justice Department still managed to implement its new death penalty policy in a way that ran afoul of the courts. Shortly before Thanksgiving, a federal trial court blocked the administration’s plans to execute four of the five inmates, holding that the Justice Department did not follow a federal statute governing how executions must be carried out.

A three-judge panel of federal appellate judges — two appointed by Republican presidents — left this decision in place in an order handed down on Monday. Later that day, the Justice Department asked the Court to allow these four executions to move forward.

If the justices ultimately side with the administration in the legal matter (called the Federal Bureau of Prisons Execution Protocol Cases), that does not bode well for opponents of the death penalty. The case involves a statutory question that is entirely distinct from the constitutional issues raised in Bucklew. It also turns on an argument that is strong enough that at least one Republican federal appellate judge voted to deny the Trump administration the relief it sought.

Should the Supreme Court side with the Trump administration, it will be a sign that the Court’s current majority is very eager to move executions forward — even when death row inmates raise strong legal claims.

This case is the latest skirmish in the execution drug wars

The backdrop for Execution Protocol involves a longstanding conflict between many manufactures of drugs used in executions and government officials who want to use those drugs to kill people.

Many of these companies outright refuse to sell their products for use in executions. Some of them are also located in Europe, and the European Commission banned export of drugs used for lethal injections in 2011. As a result, prison officials struggled to obtain the drugs they’d historically used to carry out executions. A 2013 report by the Death Penalty Information Center noted that US executions dropped nearly 10 percent from 2012 to 2013, and it concluded that “one of the reasons for fewer executions in 2013 was the ongoing problem that states have had in ﬁnding a consistent means of carrying out executions.”

One consequence of this conflict is that many states turned to painkillers of uncertain reliability to aestheticize death row inmates before they were given a lethal dose of another drug. As Justice Sonia Sotomayor warned in a dissenting opinion, this meant that some inmates could face “a method of execution that is intolerably painful—even to the point of being the chemical equivalent of burning alive.”

The conflict between drug companies and executioners touched the federal government as well. In 2005, a group of federal death row inmates filed a lawsuit, then known as Roane v. Gonzales, claiming that the three-drug cocktail the federal government would use to kill them “causes death by suffocation and heart attack, each of which causes extraordinary and excruciating suffering” in violation of the Constitution’s ban on cruel and unusual punishments. The court hearing Roane blocked the inmates’ executions while the litigation was still pending.

But then things took an unexpected turn. Like many states, the federal government struggled to obtain some of the drugs it originally planned to use to kill the Roane plaintiffs. In 2011, the Justice Department informed “the Court that the Federal Bureau of Prisons has decided to modify its lethal injection protocol,” and the case sat in limbo for years while the plaintiffs and their lawyers waited to learn what the new protocol would entail.

The injunctions preventing the government from executing the Roane plaintiffs remain in effect — for now. The five men the Trump Justice Department plans to execute are different death row inmates.

Yet, while the Roane litigation sat in limbo, the legal landscape shifted drastically against the plaintiffs in that case. In Glossip v. Gross (2015) a 5-4 Supreme Court lashed out against the drug companies that refused to make their products available to executioners.

At oral arguments in Glossip, Justice Samuel Alito, who wrote the Court’s opinion, compared these drug companies’ acts of conscience to “a guerilla war against the death penalty.” Alito wrote in his opinion that “it is settled that capital punishment is constitutional,” and that it “necessarily follows that there must be a [constitutional] means of carrying it out.”

If drug companies wouldn’t sell executioners the drugs those executioners needed to kill people painlessly, then Glossip concluded that we’d just have to let people suffer during their executions. “Holding that the Eighth Amendment demands the elimination of essentially all risk of pain,” Alito claimed, “would effectively outlaw the death penalty altogether.”

After Bucklew and Glossip, it is all-but-inevitable that the federal government will be allowed to kill death row inmates via lethal injection. But there are still some statutory limits on how those executions can be conducted, and that brings us back to the Execution Protocol case.

The district court’s decision in Execution Protocol rests on the most technical grounds. The Federal Death Penalty Act (FDPA) provides that federal death sentences shall be conducted “in the manner prescribed by the law of the State in which the sentence is imposed.” Yet, as Judge Tanya Chutkan explained in her opinion, the Justice Department plans to conduct federal executions using “a single procedure for all federal executions rather than using the FDPA’s state prescribed procedure.”

That’s not allowed, Chutkan ruled. If the federal government wishes to conduct an execution, it must comply with the FDPA.

The Trump administration, for its part, claims that the FDPA should be read very narrowly. “References to the ‘manner’ of imposing the death penalty,” the Justice Department claims, “have been understood to refer only to the ‘mode of execution, — e.g. hanging, firing squad, or lethal injection — not to all ‘additional procedural details’ of the execution.” Thus, so long as the federal government plans to use lethal injections in states that also use lethal injection, it complies with the FDPA.

Perhaps the Trump administration is right. This is the kind of question that courts often spend months pondering, typically with the benefit of briefs and oral argument.

But the Trump administration wants the Supreme Court to bypass this process of careful consideration altogether. As the Justice Department admits, the case “will become moot” after the inmates are executed. The Trump administration asks the Supreme Court to allow these executions to move forward, based on minimal briefing, and for the justices to hand down such a decision after pondering it for only a few days.

Execution Protocol, in other words, is a test of just how willing this Supreme Court is to bypass its ordinary procedures to allow Trump’s Justice Department to conduct executions.

There is little question, after Bucklew and Glossip, that the federal government is allowed to kill people using lethal injections. There is some doubt about whether the FDPA imposes certain limits on how such executions are conducted, but the Trump administration isn’t even asking the Supreme Court to resolve that doubt. It’s asking the Supreme Court to allow four men to be killed without resolving the doubt about what the law requires.