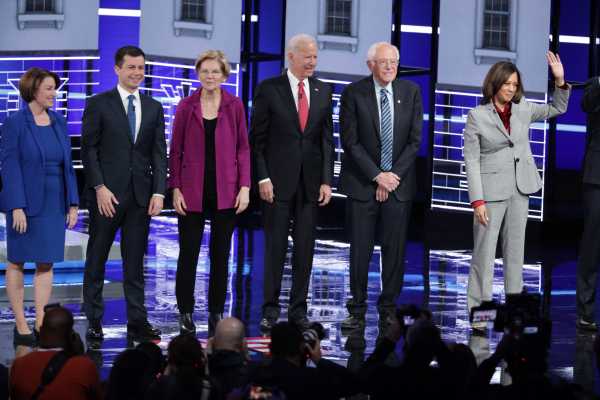 One lesson of the past few weeks is that the Medicare-for-all debate has become a minefield for Democrats — and it’s not clear that any candidate has a safe path through it.

Sen. Elizabeth Warren has dropped 14 points since October 8, when she briefly led the Democratic field in the RealClearPolitics polling average. Most attribute her decline to her handling of Medicare-for-all — the financing plan she released made her the target of attacks from the moderates, and then the transition plan she released, which envisions a robust public option in the first year of her presidency and only moving to Medicare-for-all in year three, left single-payer advocates unnerved about her commitment to the cause.

Then, on Tuesday, Sen. Kamala Harris dropped out of the race. Medicare-for-all had bedeviled Harris’s campaign from the start. She was a co-sponsor of Sen. Bernie Sanders’s bill and entered the race in January with a surprisingly full-throated endorsement of abolishing private insurance. Under criticism, Harris walked that back, eventually releasing a Medicare expansion plan with a long transition, dodgy financing, and a reimagined role for private insurers. The combination of policy reversals and botched rollout left Harris pinched between the moderates and the leftists, and undermined faith in her ability to govern on the issue Democrats rate as most important.

I’d argue that Warren and Harris made the same mistake: they treated a question of symbolic politics like a problem of policy design. In Democratic Party politics, Medicare has become a which-side-are-you-on test. Are you with Sanders and the left, and against insurance companies, squishy moderates, commodified health care, and a politics of preemptive compromise? Or are you afraid that Sanders and the left are going to scare the country into reelecting Donald Trump and set health care reform back for a generation?

This is a fundamentally political question, and splitting the difference through complex acts of technocracy ends up alienating both sides. And I say that as a technocrat who thinks Warren’s transition plan makes sense on its own terms and thought Harris ended up with a more interesting plan than she got credit for — essentially inverting the debate by proposing a public health insurance system with a private option. But the reaction to both plans makes clear they missed the point.

The ferocity of this debate is at odds with the legislative reality. Even if a Democrat wins, Medicare-for-all will not pass the House and it will not pass the Senate. “I’m not a big fan of Medicare for All,” House Speaker Nancy Pelosi said. When I interviewed the key Senate Democrats who will write the next health reform bill, none of them supported Medicare-for-all or believed it could pass.

The primary itself has been evidence of Medicare-for-all’s long odds: A number of the co-sponsors on Sanders’s bill, like Harris and Sen. Cory Booker, have made clear they don’t actually support it as written. And a number of other senators the bill would need, like Amy Klobuchar and Michael Bennet, have come out in direct opposition to the legislation. Medicare-for-all would be a difficult lift even if the Democratic Party was united; it’s not going to pass with the party divided.

So what’s the way out? 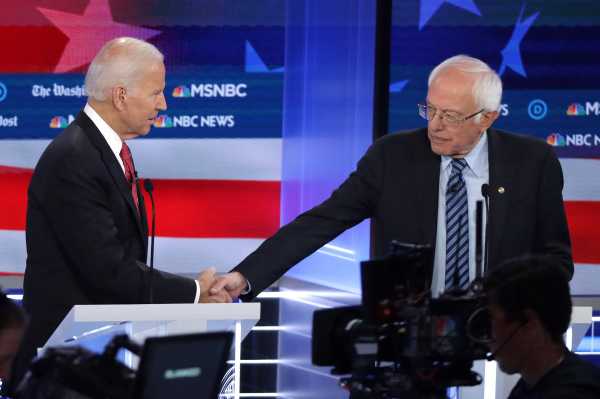 On one level, I think this positions Sanders as perhaps Democrats’ best hope as a unity candidate. He is more acceptable to more Democrats than the elite conversation admits — as political scientists John Sides and Lynn Vavreck show, a plurality of Biden supporters list Sanders as their second choice.

But Sanders also has a unique level of credibility with the party’s more ideological left wing. His commitment to Medicare-for-all is sufficiently steadfast that leftists will believe him if and when he has to convince them that the compromised bill Congress is prepared to pass is the best bill they’re going to get. He wrote the damn bill; he might be the only one who can cut the damn deal. And if Sanders was able to get an ambitious Medicare-for-more plan through Congress and make it look like a compromise, it’d be a tremendous legislative coup.

On the other hand, Warren’s tumble will add to worries that Medicare-for-all makes Sanders an uncertain bet to win the presidency, and potentially boost former Vice President Joe Biden, who already leads among voters worried about electability.

The attacks on Medicare-for-all in the primary are a shadow of what would come in a general election, when the entire Republican Party, the entire health industry, and much of corporate America will devote billions of dollars to a 24/7 campaign of fearmongering and disinformation that dwarfs the genteel debates among the Democrats.

There’s a belief on the left that Medicare-for-all is extremely politically popular, and full-throated support for it is a political winner despite all the attacks that Republicans and industry will throw at it. The primary has been a soft test of that question. Warren and Sanders are the national advocates — complete with large bases of support and the ability to command media coverage — the policy never had in the past. The criticisms, meanwhile, are coming from other Democrats who at least claim to support Medicare-for-all as a goal, even if they favor a more incremental path on both substantive and political grounds.

The result is that net approval of Medicare-for-all has fallen 24 points among Democrats, and is underwater with both independents and Republicans. Part of the reason, surely, is that the health industry is running ads against the idea in early primary states. But that just underscores the point: It’s hard to look at the polling of both Medicare-for-all and its advocates and be confident public support would hold under the kind of assault in the offing.

Adding to the trouble, a recent analysis by political scientist Alan Abramowitz found that Medicare-for-all was a liability for House Democrats who supported it in 2018. Even controlling for factors like the partisan lean of the district, political spending, and incumbency, candidates that backed Medicare-for-all performed “significantly worse” than those that didn’t. It’s hard pinning down causality when you’re dealing with events as messy as House races, but Abramowitz’s work will worry vulnerable congressional Democrats even as a big portion of the liberal base is making Medicare-for-all into the key litmus test.

Where does this leave Democrats? I’m not honestly sure. The primary is riven by a deep, substantive disagreement over both the politics and the policy of health care. And there’s good evidence that bitter primaries really do hurt parties in the general election. But the candidates who’ve tried to bridge the divide have suffered for their efforts. The party is likely to have to choose one path or the other, and the choice is going to hurt.

But it’d be an awful legacy for the 2020 field if the fight between Medicare-for-all and Medicare-for-more ended up empowering the Republican agenda of Obamacare for none and Medicaid for fewer.