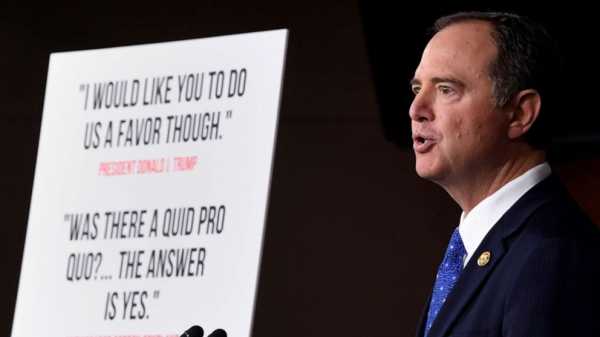 In a historic move, House Democrats have released a 300-page sweeping report outlining their case for President Donald Trump’s impeachment. The evidence presented in the report will be used by the House Judiciary Committee to draft those specific articles of impeachment.

(MORE: Impeachment report details ‘scheme’ by Trump to pressure Ukraine for his benefit )

Here are the top takeaways from the report:

Democrats say Trump placed his personal interests above the nation

Citing weeks of closed-door and public testimony by several top administration aides, Democrats allege that Trump abused his power as a sitting president by soliciting a foreign government to benefit his reelection. They say he did this by holding up plans for a presidential summit and nearly $400 million in security assistance until Ukraine would announce an investigation that included Trump’s 2020 political rival, Joe Biden.

(MORE: Read the impeachment report from the Democrats on the House Intelligence Committee)

“In doing so, the President placed his own personal and political interests above the national interests of the United States, sought to undermine the integrity of the U.S. presidential election process, and endangered U.S. national security,” the Democrats wrote.

Republicans have argued in their own report, released on Monday, that Democrats have ignored Trump’s “state of mind,” noting that he had a “reasonable skepticism” of Ukraine because of its history of corruption. They say there’s no specific evidence that the president had the 2020 election in mind when he pressed Ukraine to launch an investigation into Biden’s actions as vice president and his son, Hunter.

(MORE: Impeachment report details ‘scheme’ by Trump to pressure Ukraine for his benefit )

Democrats note in their report that according to several witnesses, Trump’s actions on Ukraine were at odds with official U.S. foreign policy, which called for supporting the new government in Ukraine to fend off Russian aggression. 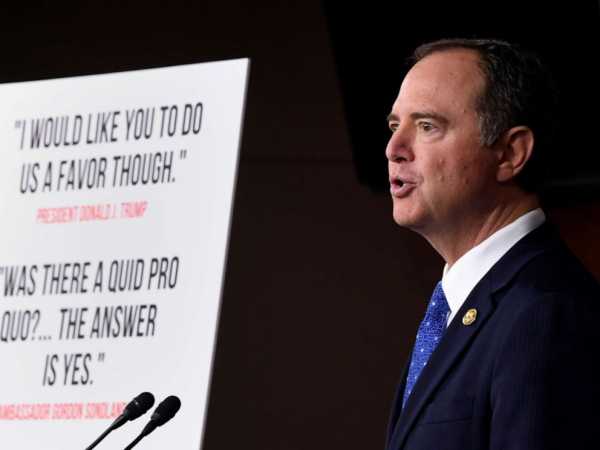 Democrats lay out the case for obstruction, witness intimidation

The Democratic report also accuses Trump of trying to block their inquiry, potentially laying out the case for an impeachment article on obstruction.

With Trump insisting the inquiry is a “hoax,” the White House had ordered witnesses to ignore congressional requests for documents and testimony.

Several aides from the White House, Pentagon and State Department agreed to testify anyway under subpoena. But those closest to the president, who could speak to the president’s “state of mind,” have refused to cooperate, including Vice President Mike Pence, Trump’s personal lawyer Rudy Giuliani, acting White House Chief of Staff Mick Mulvaney, former Energy Secretary Rick Perry and Secretary of State Mike Pompeo.

(MORE: House GOP lays out defense of Trump on Ukraine, says he wasn’t looking at 2020)

Democrats note that no other president has gone to such lengths to thwart a congressional inquiry.

“Even President Richard Nixon — who obstructed Congress by refusing to turn over key evidence — accepted the authority of Congress to conduct an impeachment inquiry and permitted his aides and advisors to produce documents and testify to Congressional committee,” the report states.

The report also calls out Trump for taking to Twitter to criticize witnesses who were testifying.

“The President’s attacks were broadcast to millions of Americans — including witnesses’ families, friends, and coworkers,” Democrats stated, adding that it’s a federal crime to intimidate a witness appearing before Congress.

‘Bribery’ and ‘extortion’ aren’t mentioned, yet

The report, drafted by the House Intelligence Committee, doesn’t use the terms “bribery” or “extortion” specifically, despite top Democrats having accused Trump of exactly that. But Democrats have suggested that the final decision on whether bribery should be included as an article of impeachment is up to the House Judiciary Committee.

Rep. Adam Schiff, the Democratic chairman of the House Intelligence Committee, suggested in an NPR interview on Tuesday that it should be.

“I don’t think there’s any question that the uncontested facts show this president solicited a bribe,” Schiff said. 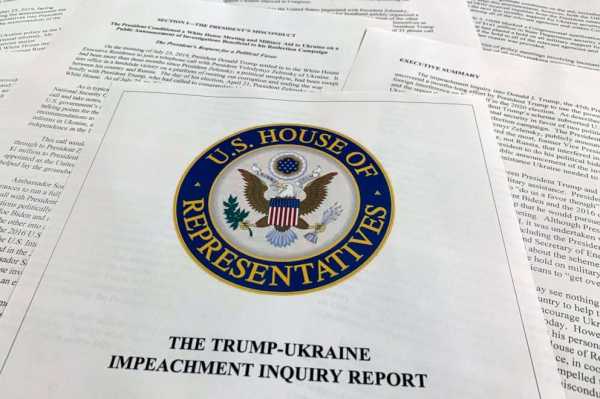 The report from Democrats on the House Intelligence Committee on the impeachment inquiry into President Donald Trump is photographed in Washington, Dec. 3, 2019.

There are phone records.

While much of the report recaps previous testimony, Democrats released call logs they obtained of Trump’s personal lawyer, Giuliani, who was in frequent contact with the White House, including the budget office.

It’s unclear exactly what Giuliani discussed with his White House contacts, but the logs show for example a 13-minute phone call between Giuliani and the Office of Management and Budget on Aug. 8. That came as Giuliani was also working with diplomats Kurt Volker and Gordon Sondland to press Ukraine into launching the investigations Trump wanted, according to documents and witness testimony.

Democrats in the report also accuse Trump’s inner circle of collaborating with him on the pressure campaign, including naming Pence, Pompeo, Perry and Mulvaney as “knowledgeable of or active participants” to “extract from a foreign nation the political benefits sought by the President.”

Pence and Perry’s offices have denied putting any political pressure on Ukraine, while Mulvaney has referred to witness testimony about his role as “speculation.” Pompeo has not directly addressed allegations of his involvement, saying only that he was “proud of what we’ve accomplished” on Ukraine. All four have declined to cooperate with the congressional inquiry.

(MORE: From a controversial phone call to impeachment calls: A Trump whistleblower timeline)

Democrats though point specifically in the report to Mulvaney’s press conference in which he acknowledged that politics influences foreign policy and told reporters to “get over it.”

Schiff told reporters that no one should “get used to this.”

“We are signaling to any future president that can engage in whatever corruption, malfeasance or negligence and they are beyond accountability,” he said.