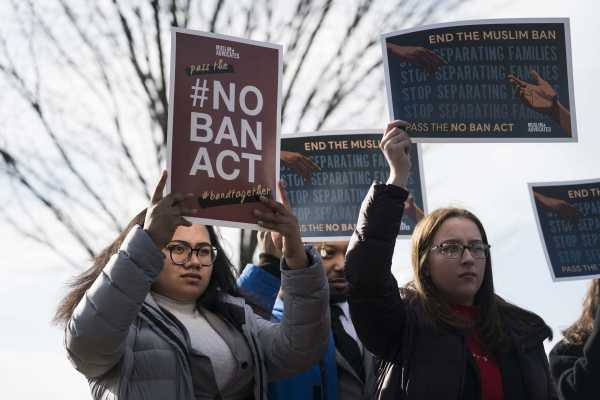 Amid reports that President Donald Trump is planning to expand his travel ban, Speaker of the House Nancy Pelosi is sending a message: She announced Monday that the House will hold a vote in the coming weeks on a bill that would dismantle it altogether.

The bill, known as the National Origin-Based Anti-discrimination for Nonimmigrants (NO BAN) Act, would repeal Trump’s travel ban on citizens of seven countries and limit the president’s authority to issue such sweeping bans in the future. It would also strengthen existing prohibitions on religious discrimination with respect to visa applications guaranteed by the Immigration and Nationality Act (INA) — what immigrant advocates have praised as a means of protecting the rights of American Muslims.

The INA currently bans discrimination in the issuance of visas only on the basis of “race, sex, nationality, place of birth and place of residence.” There is no provision prohibiting religious discrimination, which made it more difficult for immigrant advocates to argue that the travel ban was unlawful.

The bill seeks to correct this by amending the INA to require that any travel ban be temporary, based on credible evidence, subject to congressional oversight, and be created only in response to specific actions foreign entities have taken to threaten the US. The bill also states that a ban must also advance a compelling government interest in the least restrictive way possible.

These proposals have been praised by immigration advocates, like those at the National Immigration Law Center, who said they would “ensure that future presidents would not be allowed to issue orders based so clearly on anti-Muslim bias or any other religion-based animus and that every visa applicant would receive individual consideration.”

The House Judiciary Committee will debate and potentially amend the bill, which has broad Democratic support, in the next two weeks, and is expected to advance to the floor for a full House vote. But even if the bill passes the House, it has little prospect of clearing — or even being considered in — the Republican-led Senate, where several recent immigration bills have languished.

This congressional reality makes Pelosi’s show of support for the bill appear to be as much about warning Trump to think twice about expanding his travel ban as it is about policy.

“House Democrats continue to stand opposed to President Trump’s cruel, un-American travel ban in all of its iterations,” Pelosi said in a statement Monday.

Politico reported last week that Trump is weighing expanding the existing ban to cover citizens of seven additional countries: Belarus, Myanmar, Eritrea, Kyrgyzstan, Nigeria, Sudan, and Tanzania. The ban would prevent most citizens of those countries from coming to the US, with exceptions for refugees and those who already have US green cards or visas.

Under the first version of the ban, unveiled in January 2017, citizens of seven majority-Muslim countries, including those who held US green cards and dual US citizenship, were held for questioning for many hours at airports across the country and were denied entry to the US. A de facto “Muslim ban,” the policy appeared to be the execution of Trump’s call on the campaign trail for a “total and complete shutdown” of Muslims entering the US and sparked widespread protests throughout the country.

That ban was amended in the face of court challenges; the version of the ban now in place — the third Trump has issued — was upheld by the US Supreme Court in June 2018. It places restrictions on citizens of Iran, Libya, Somalia, Syria, Yemen, Venezuela, and North Korea who seek to enter the US. (Chad was taken off the list of countries subject to the ban last April after it met the Trump administration’s demands to share information with US authorities that could aid in efforts to vet foreigners.)

The NO BAN Act is an effort to negate the Supreme Court’s ruling, albeit one that’s unlikely to succeed. But even if it fails in the Senate, the bill will allow Democrats to contrast themselves with Trump ahead of the 2020 election and present themselves as a party that welcomes immigrants, rather than keeping them out.