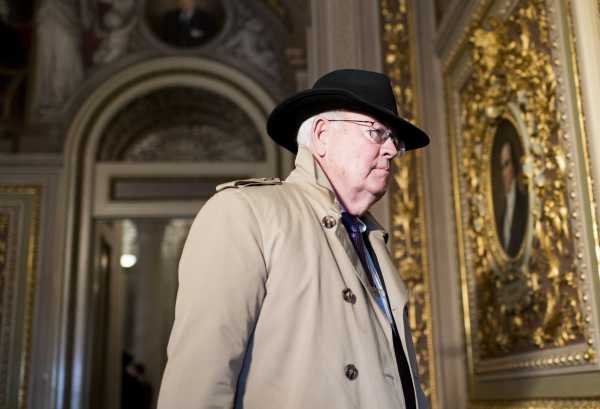 Trump’s legal team had already raised eyebrows when the White House announced its members. That team is composed of a number of controversial figures, including Alan Dershowitz — who has been accused of sexual assault, allegations he denies — and Starr, best known for his leading role in President Bill Clinton’s impeachment in the 1990s.

But Starr’s comments Monday, which came as the legal team wrapped up the opening arguments they began on Saturday, struck a chord with observers for their deep irony. His implicit message: Impeachment is a political tit-for-tat, but that lamentable reality has absolutely nothing to do with him.

“The Senate is being called to sit as the high court of impeachment all too frequently,” Starr said. “Indeed, we are living in what I think can aptly be described as the ‘Age of Impeachment.’”

He went on to ask, “How did we get here, with presidential impeachment invoked frequently?”

Starr cited the inquiry that led to President Richard Nixon’s resignation as the beginning of frequent, partisan impeachments. Nixon’s conduct in that inquiry, he argued, led to the signing of the Ethics and Government Act of 1978, which Starr says empowered independent counsels to pursue needless impeachments, which each successive counsel serving as “an agent of the House of Representatives.”

While it is true that Nixon’s impeachment inquiry was the first one in modern times — with the last presidential impeachment before then being 1868’s impeachment of President Andrew Johnson — Starr didn’t need to go back that far, or to bring up ’70s legislation at all.

Instead, he would have been wise to begin with Clinton’s impeachment — something he did mention in his recap of impeachment history, noting that Clinton’s counsel called the 1978 law “a dagger aimed at the heart of the presidency” — focusing on his own role in that affair.

Starr, of course, served as one of those “agents of the House,” investigating Clinton’s affair with Monica Lewinsky. His role was akin to that of special counsel Robert Mueller in investigating President Donald Trump’s dealings with Russia, but Starr took a far more public and adversarial role.

He led Republican efforts in the House to investigate Clinton, and published his findings in what became known as the Starr Report, a document that was far more showy than Mueller’s work, and one that made an express recommendation, finding Clinton’s conduct “may constitute grounds for impeachment.”

Starr said on Monday he was merely following that 1978 law when he submitted his report and made his recommendation.

What came next: Democrats denouncing the inquiry into Clinton as “really partisan” and a “witch hunt” and the House minority leader at the time warning, “This day feels to me like we’re taking a step down the road to becoming a political lynch mob.” Starr framed all this as a natural reaction to House Republicans pushing for his investigation due to their anger over Democrats’ oversight role during the Iran-Contra affair.

Which of course, ignores his own role in making it a spectacle, and the differences between past impeachments and the current one.

Bill Clinton was impeached for the high crimes and misdemeanors of perjury and obstruction of justice — he lied about his affair with Lewinsky and tried to cover it up; he committed political wrong trying to hide a moral failing. Trump, on the other hand, was impeached for abuse of power for trying to have a foreign power influence a US election, and like Clinton, obstruction of justice; he committed a political wrong trying to conceal an attack on a democratic institution.

And it also ignores the fact that special counsel investigations have not always led to impeachment. Take for instance, Mueller’s work: Unlike Starr, he presented only the facts, not recommendations on impeachment or criminal proceedings. And the House declined to impeach Trump based on those findings.

This makes it wrong to lament “presidential impeachment has become a weapon” parties wield against one another, as Starr did Monday. If it is any such thing, Starr played a key role in showing politicians how they might use it as such. And even if it is sometimes used this way — it is important to remember there remain cases when it is necessary for Congress to step in and check the president, like when he’s accused of trying to influence an election in his favor.