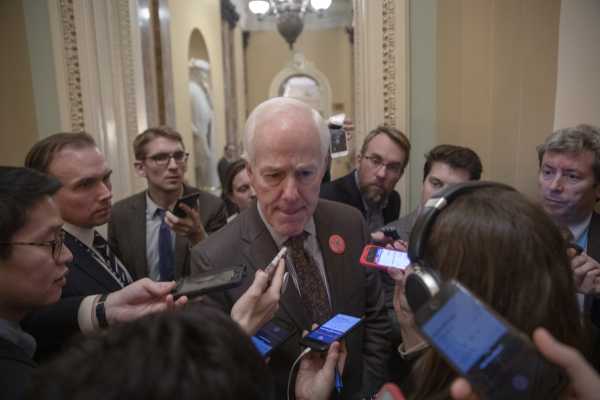 Twelve Senate Republicans made a stark break from President Donald Trump on Thursday, voting to block his national emergency declaration in an unprecedented rebuke.

It was the second time this week that Republican lawmakers went against the president: On Wednesday, seven Republicans voted for a resolution ending US involvement in Saudi Arabia’s conflict in Yemen. Trump is expected to veto both measures.

Republicans, including some who voted against the emergency, say they see these two instances as one-off occasions.

“I think they’re really unique,” Senate Majority Whip John Cornyn (R-TX) told Vox. “The Yemen vote was based on concerns Congress had acquiesced too much executive authority when it comes to engaging in conflicts or supporting allies and obviously concerns about the humanitarian crisis, which is terrible, in Yemen. This vote is more an institutional concern about separation of powers and Congress’s prerogatives more than anything else, so I don’t [see] those as part of a larger trend.”

Both votes highlighted key splits from the president by a party that’s broadly supported him even as he’s plunged the country into a devastating government shutdown, championed the rollback of crucial environmental protection, and employed racist rhetoric to champion hardline immigration policies. As the Washington Post’s Aaron Blake points out, this isn’t the first time Republicans have signaled opposition to Trump, but it is one of the rare instances when it hasn’t been purely symbolic.

By voting in favor of a resolution terminating Trump’s national emergency, Senate Democrats and Republicans indicated, in the strongest terms, that they were effectively willing to end the emergency that helped bolster one of his key campaign promises.

Given Republicans’ longstanding reluctance to openly confront Trump, the fact that it happened at all seemed to suggest there could be more openness in the GOP to push back against the president in general. That’s not exactly the case, Republican senators told Vox.

“I don’t think [this shows a willingness to oppose the president in the future],” Sen. Steve Daines (R-MT) said. “Each senator had to come to his or her conclusion.”

Sen. Rand Paul (R-KY), one of the dozen Republicans who did go against the president on the emergency, added that he and Trump still had plenty of common ground.

“I’m still supportive of the president on lower taxes, less regulations, conservative Supreme Court justices,” he said. “I just see it as, I’m also for the Constitution.”

Many Republicans justified their vote against Trump by citing more abstract concerns about executive power.

Several GOP lawmakers who voted against the national emergency went out of their way to argue that they were simply preserving the sanctity of the Constitution, and not so much disagreeing with Trump at all.

“I share President Trump’s goal of securing our borders, but expanding the powers of the presidency beyond its constitutional limits is something I cannot support,” Sen. Jerry Moran (R-KS) emphasized in a statement explaining his vote in favor of the resolution.

Instead of calling out Trump, their stances on the vote were broadly reframed to focus on Congress’s responsibility to respect the Constitution and protect the separation of powers.

Alexander, who is retiring in 2020, told Vox he hoped the two recent votes would remind senators of their constitutional power.

“I think the value of these last two weeks has been to remind the Senate of our constitutional place, and the reason for it,” he said. “It goes to the very source of our freedom; it’s the way we balance power in this country.”

While Republican lawmakers undoubtedly need the president’s support to advance policies they’ve long prioritized, like tax reform, there’s also another big reason some have held off on confronting Trump: They’re worried about what opposing him could mean for their own future elections.

Trump laid out the electoral threat for Republicans who voted against his national emergency pretty explicitly earlier this month. “I really think that Republicans that vote against border security and the wall, I think you know, I’ve been okay at predicting things, I think they put themselves at great jeopardy,” he said during a Fox News interview.

And as Sen. Thom Tillis (R-NC) quickly discovered, this certainly didn’t seem like an idle statement. Tillis was one of the first senators to come out with his support for the resolution blocking the national emergency, writing a splashy Washington Post op-ed breaking down his reasoning.

“Republicans need to realize that this will lead inevitably to regret when a Democrat once again controls the White House, cites the precedent set by Trump, and declares his or her own national emergency to advance a policy that couldn’t gain congressional approval,” he wrote at the time. Roughly two weeks later, Tillis flipped and instead voted against the resolution.

What changed in the interim? Republican activists in North Carolina began floating the idea of a primary challenge in 2020, a cycle in which Tillis is up for reelection, the Hill’s Scott Wong and Alexander Bolton reported. “North Carolina Republican primary voters have made their voices clear. They stand with the President. Our senators should as well,” Rep. Mark Walker, a potential Republican primary candidate, told the Hill.

In a statement on his vote, Tillis said that his focus was now working with the president to amend the National Emergencies Act to curb executive overreach. Some other senators up for reelection in 2020 also stuck by the president in the national emergency vote, including Sens. Cory Gardner (R-CO), Martha McSally (R-AZ), and Ben Sasse (R-NE). Sen. Susan Collins (R-ME), however, voted against the emergency.

Because of Trump’s ongoing popularity with a sizable portion of the Republican base, it’s certainly possible his sway in their respective states could continue to affect lawmakers’ decision-making.