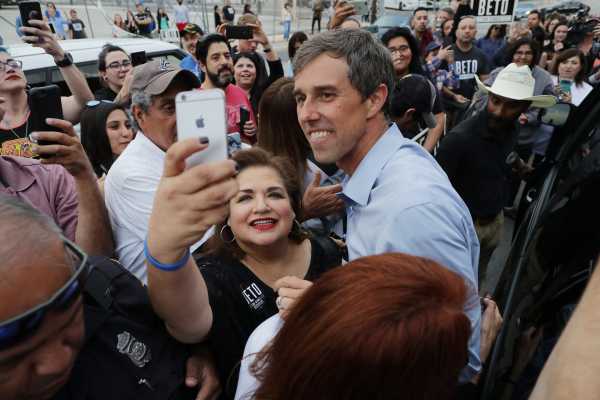 Beto O’Rourke lost the Texas Senate race in November. Four months later he’s running for president — and early polling shows there’s a not insignificant percentage of people who seem to be on board — or at the very least know who he is.

O’Rourke has spent the last several months traveling the country, from Oklahoma to Wisconsin, trying to get out of a self-described “funk” and researching a possible 2020 bid. He lost to Republican Sen. Ted Cruz by just over 2 percentage points — the closest Senate race in Texas since 1978. Since his loss, he has polled among Joe Biden, Sen. Bernie Sanders (I-VT), and Sen. Kamala Harris (D-CA) in early 2020 surveys, which really say more about name recognition than actual long-term support.

And so O’Rourke concluded that he was “born to be in” the Democratic primary. His supporters see it.

“I think Beto represents a positive vision for the country and in many ways is a breath of fresh air and a break from our current politics of the moment,” said Will Herberich, a Boston resident who co-founded the Draft Beto 2020 PAC — a group that organized across the country to encourage O’Rourke to run.

Based on a conversation with him, enthusiasm around O’Rourke is three-fold.

It’s his most defining quality. He can command a crowd; he’s a politician living out a rock-star dream. And as every one of the numerous profiles of him has to mention, he actually was a punk rocker in his youth. Those performances didn’t come close to the crowds he’s drawing now — nor did they land him a seat on the couch with Oprah (which losing to Cruz did).

“His ability to excite and motivate people all over the country — he has this unique ability to inspire people to take action and organize,” Herberich said. “He was able to turn out millions of voters in Texas who hadn’t voted in a midterm election before.”

This charisma has propelled him far. He’s been compared to Obama and been confused for a Kennedy.

It was also central to O’Rourke’s Senate campaign. Incredibly savvy with social media, the Texas Democrat became known for his almost-intrusive live videos on Facebook and Instagram, streaming breakfasts with his kids, to making the case for pro-immigration policy by interviewing his dental hygienist, while in the chair. Among the biggest messages in his Senate run was that he went to every single one of Texas’s 254 counties and talked to anyone that would listen.

2) He came close to unseating Ted Cruz, one of the best political foils a liberal could hope for

To his supporters, almost beating Cruz in a conservative state, known for having very low voter turnout, is enough proof that O’Rourke is a formidable candidate.

His long-shot candidate status against a conservative bogeyman helped catapult O’Rourke nationally. There were yard signs for O’Rourke Senate bid everywhere from California to Virginia, and the money poured in. O’Rourke broke fundraising records in 2018, raising more than $38 million just in the final quarter of his Senate campaign — more than three times what Cruz raised in that time — without taking money from corporate PACs.

And he turned out a lot of voters. As FiveThirtyEight’s Clare Malone breaks down, O’Rourke really outperformed other candidates in Texas’s major urban areas:

But it’s worth pointing out (as many have) that there won’t be a Cruz-like foil in the Democratic 2020 primary. O’Rourke’s supporters, however, say that while Cruz certainly played a role in O’Rourke’s rise, the Democrat had moments that were purely about him.

“I heard about Beto was when the video came out when he spoke out in support of NFL players kneeling,” Herberich said as an example, referring to a viral speech O’Rourke gave during the Senate race about racial injustice.

Important to O’Rourke’s success is that it isn’t ideological. Unlike other rising stars in the Democratic Party, like Sens. Elizabeth Warren (D-MA), Harris, and Sanders, who have been presenting concrete policy proposals, O’Rourke presents ideals. That vagueness around policy has allowed him to both harness progressive grassroots energy, as well as the “no labels” voter.

His actual voting record is what you might expect for a Texas Democrat; he’s voted more conservative than the average Democrat. When his name was first being floated for a possible 2020 presidential run, he took hits from the left for taking campaign money from the oil industry and for being part of the New Democrats coalition — a group of House moderates.

Depending on whom you ask, O’Rourke being a blank slate is either his biggest asset or his most apparent vulnerability.