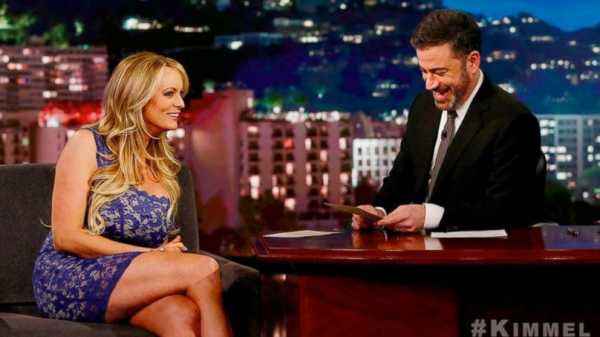 “That doesn’t look like my signature, does it?” Daniels said. “I do not know where it came from.”

When Kimmel read reported details of the alleged affair, Daniels interjected with a barb aimed at the president.

“I thought this was a talk show, not a horror movie,” Daniels quipped.

And when pressed by Kimmel to answer the question on everyone’s mind, Daniels provided neither confirmation nor denial of the alleged affair.

“Is any of that true?” Kimmel asked.

Daniels, 38, whose real name is Stephanie Clifford, has starred in several pornographic films and appeared in a pair of raunchy big-budget comedies — “The 40-Year-Old Virgin” and “Knocked Up.”

On Jan. 12, the Wall Street Journal reported that Trump’s personal attorney and longtime confidant, Michael Cohen, had arranged to pay Daniels $130,000 shortly before the 2016 election “as part of an agreement that precluded her from publicly discussing an alleged sexual encounter” with Trump long before his unexpected ascent to the Oval Office.

Trump, through Cohen, denied that any such encounter had taken place, while Daniels, in a statement released by Cohen, said that her relationship with Trump was “limited to a few public appearances and nothing more,” calling any “rumors” of hush money “completely false.”

The story, however, has continued to gain momentum.

In a previously shelved 2011 interview recently published by In Touch magazine, Daniels said the future president invited her to his hotel suite at a celebrity golf tournament in Lake Tahoe in 2006 and described a sexual encounter with the then-real estate mogul turned reality television star in salacious detail.

In the interview, Daniels said that when she asked Trump about his wife, Melania, who had given birth to his son, Barron, just four months earlier, Trump said: “Oh, don’t worry about her.”

She met Trump several more times over the next year, she said, but later grew to regret the affair after starting a family of her own.

According to James Heidenry, editorial director at In Touch’s Germany-based publisher Bauer Media, Daniels story was corroborated by two other people and she passed a lie-detector test.

“I completely believe in its veracity,” Heidenry told ABC News. “We were able to back it up.” 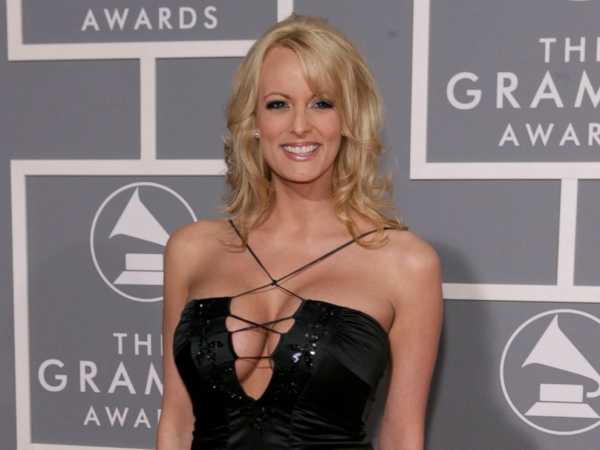 The Associated PressFILE – In this Feb. 11, 2007, file photo, Stormy Daniels arrives for the 49th Annual Grammy Awards in Los Angeles. Daniels who had previously alleged an extramarital affair with Donald Trump now says in a statement the affair never happened. A lawyer

Daniels also offered to share her story with mainstream outlets, including ABC News, in the months leading up to the 2016 election.

Daniels approached producers at ABC’s “Good Morning America” before the election to discuss the possibility of an interview, but she and her attorney suddenly stopped communicating with the network shortly thereafter.

Jacob Weisberg, chairman and editor-in-chief of the Slate Group, also spoke to Daniels after hearing rumor of the affair, and though he was able to verify parts of her story with her friends, the publication balked when Daniels demanded payment “in the range of $125,000.”

“I think she was looking to get paid for her story,” Weisberg told ABC News. “She thought she had a thing of value, and she was probably largely indifferent whether the payment came indirectly from Donald Trump or from a news organization.”

According to the New York Times, Mrs. Trump was “furious” with the president following reports of the affair and may have cancelled plans to join him in Davos last week as a result.

Mrs. Trump attended President Trump’s State of the Union address on Tuesday but left shortly after the speech concluded while the president was still in the chamber.