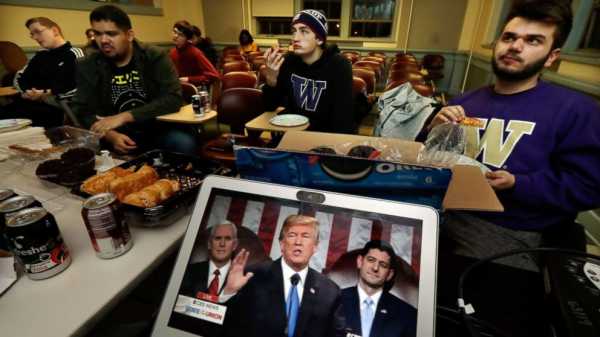 Stephen Colbert opened “The Late Show” with a few quotes from the president’s speech followed by what he thought were more realistic statements. 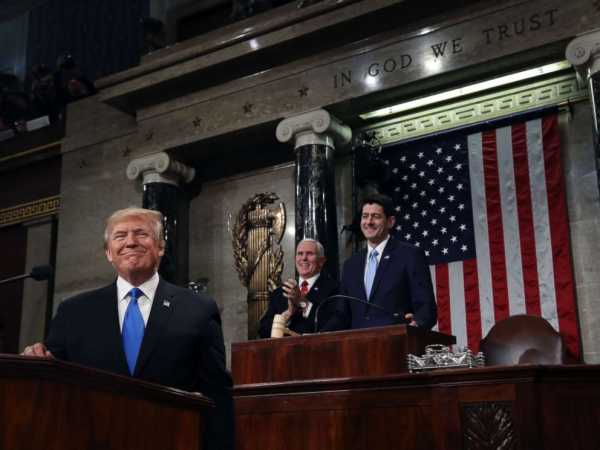 Win McNamee/Pool via APPresident Donald Trump pauses as delivers his first State of the Union address in the House chamber of the U.S. Capitol to a joint session of Congress, Jan. 30, 2018 in Washington.

“The Daily Show with Trevor Noah,” which also ran a special live show in the wake of the address, highlighted the absence of a few notable Democrats, including Rep. Maxine Waters, D-Calif., and Rep. Frederica Wilson, D-Fla., who boycotted the event.

“That’s right, about a dozen Democrats boycotted the state of the union. There were so many black women missing, Boko Haram tried to take credit,” Noah joked, referring to the jihadist terrorist organization, which once kidnapped hundreds of Nigerian schoolgirls.

Noah also pointed out a portions of the speech that he said said were inaccurate, including the part when the president claimed to have “passed the biggest tax reforms in American history.”

“This is a lie, nowhere near it. But this wasn’t a night for facts,” Noah said. “This is all about celebrating President Trump. He was in such a good mood he reached across the aisle not just to grope someone but to get something done.

“Watching a Trump speech is like watching him cover mistakes. He screws up all the time many, it’s normal. But for him, it’s not a mistake, it’s an opportunity to redefine reality,” he added.

Over on “The Tonight Show,” with Jimmy Fallon managed to find at least one thing to celebrate about the president’s address: He appeared to stick to the teleprompter.

“I saw that Trump read his speech off a teleprompter. You could tell, because he began by saying, ‘Applause, good evening, applause. Please be seated. They sit,'” Fallon joked. “To make sure he stayed on track, his staff had a little Mickey Mouse head bounce over the words like a sing-a-long song.

“But experts said it was a very historic State of the Union, you know, because it marked the first time since taking office that Trump went a full hour without tweeting,” he added.