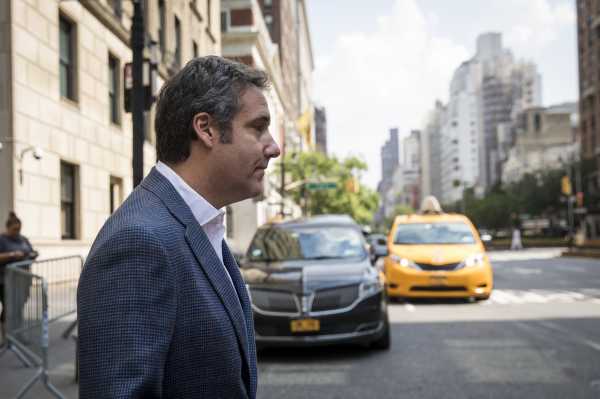 We might be closer to the end of the Michael Cohen story than we are the beginning, according to a new report.

William Rashbaum, Ben Protess, and Maggie Haberman at the New York Times reported late Sunday that federal investigators looking into Cohen’s business activities are focused on more than $20 million in loans to taxi businesses that Cohen and his family own. The value of the loans, from two New York financial institutions that cater to the taxi industry, has not been previously reported. Investigators are also probing payouts made by Cohen to women who alleged they had affairs with Donald Trump in exchange for their silence, which could have run afoul of campaign finance laws.

According to the Times, the investigation into Cohen, which is being handled by the US attorney’s office for the Southern District of New York, is entering its final stages, and prosecutors are considering filing charges by the end of August — that is, of course, if Cohen doesn’t reach an agreement with prosecutors first. Cohen could reach some sort of plea deal in which he provides information — including to special counsel Robert Mueller as part of the Russia investigation — in exchange for leniency.

Cohen has indicated in the past that he’s open to the idea. Trump’s longtime lawyer and fixer has sounded increasingly disloyal to the president publicly. After he switched up his legal team in June, there were multiple reports that he might be considering cooperating with investigators.

“My wife, my daughter, and my son have my first loyalty and always will,” Cohen said in an interview with George Stephanopoulos for Good Morning America in July. “I put my family and country first.”

Investigators have reportedly zeroed in on $20 million in loans

According to the Times, investigators are looking into whether Cohen may have committed bank and tax fraud with regard to a series of loans totaling more than $20 million made to him by Sterling National Bank and the Melrose Credit Union in 2014. They’re looking at whether Cohen misrepresented the value of his assets to get the loans, how he handled income from the taxi medallions he owned (which are required to operated New York City taxis), and whether he failed to report money he made in cash to the IRS.

The Times report also indicates that Evgeny Freidman, a longtime friend and former business associate of Cohen’s, might provide evidence against him. Friedman, the so-called “Taxi King,” started cooperating with investigators this spring after a federal judge found he transferred more than $60 million into offshore accounts to avoid paying debts. He might be a problem for Cohen:

Since the FBI raided his home and office in April, Cohen has become a major focal point in the ongoing probes into President Trump’s inner circle and their business dealings. Special counsel Mueller started the investigation into Cohen and then passed it off to the Southern District of New York, and if Cohen strikes a deal with prosecutors, the Times reports that it’s likely it will involve him providing information to Mueller.

Of course, Cohen might not make a deal — maybe he’ll refuse, or he won’t agree to terms, or prosecutors will decide he doesn’t have enough information to make it worthwhile. If the issue isn’t wrapped up by August, prosecutors are likely to wait until after the 2018 midterms, according to the Times.